Staff member
I have to wonder if he suffered some sort of traumatic brain injury in the accident then...

I can't help but say this makes absolutely no sense. I would hope they would do a tox on the man however at this late stage I don't know how much would show up? First, it amazes me all 3 survived the accident and got out of the car and quickly from what we heard from "witnesses". The one witness if I recall said this vehicle was flying (paraphrasing) meaning rapid speed before it crashed... Did he take them out for ice cream and was to take them back but when he did not, the family maybe rightfully so said no reason to worry, he has never did anything before...?

All I can figure here is since there is no one to charge with anything and this is nothing but tragic, they are going to leave the questions there.

I get the head injury thought but this case and the answers just seem a bit pat... Was he even supposed to be with them where he was when they crashed? I had the impression that he was not supposed to be. And he managed to get all of them out? And later struck his daughters with a heavy object?

I guess it does not matter and Canada is different in its ways and laws than we are. There are things in the young men's case some time ago that have never been shared except perhaps with the parents, etc.

The coroner and follow-up may bring more, I think it did in the other case somewhat, but I doubt we will ever hear it all.

Just my opinion though and only because it doesn't seem to quite add up or make sense... This one sounded to me from the start almost like something triggered this father...

Nothing will bring any of the three back though and I get and respect that.

SQ reveals how the Carpentier family's deaths played out

Police say the father and his two girls — who were killed with a blunt instrument — were already dead the day the Amber Alert was issued.

Up until he crashed his car with his two daughters in it on the night of July 8, there was nothing to indicate Martin Carpentier posed a danger to his family, police said Wednesday.

He was travelling on the route he was expected to be taking after going out for ice cream, along Highway 20 near St-Apollinaire, close to Quebec City. Forensic investigation of the scene indicates the crash was an accident, that Carpentier lost control of his vehicle and tried to regain it before smashing. A partially eaten ice cream cone was found left behind. Blood traces indicated at least one of the girls had been injured in the accident.

Police contacted the girls’ family to say there had been an accident and the victims were missing. Family members did not say they were worried Carpentier was trying to kidnap his girls, or would harm them, Sûreté du Québec chief inspector Guy Lapointe said. Carpentier was no longer with the girls’ mother. It was not until the next day that the SQ would issue an Amber Alert, indicating they feared for the safety of the children, Norah and Romy Carpentier, aged 11 and 6.

By that time, police now know, both the girls and the father were already dead.


Witnesses spotted Carpentier crossing the highway, carrying one child in his arms, the other walking alongside him. It was the last time they were seen alive. Carpentier left behind one of his sandals in the car, and his cellphone. Records show his parents-in-law called him about an hour after the accident.

Within the next 12 hours, Carpentier walked 1.7 kilometres south into the forest with his daughters, breaking into a trailer. He took a shovel and a lighter.

About 750 metres further south “is where the irreparable happened,” Lapointe said. The two girls were killed with a blunt object. Carpentier made it another 2.5 kilometres further south, stealing a ladder from a resident’s property along the way, then took his life. Police would not say how he killed himself.


Lapointe said while the girls were hurt in the car accident, police are sure their father killed them.

“For us it’s clear it was a double murder and the girls were killed at that time,” he said.

Staff member
Just had to share this picture of these two sweet girls. 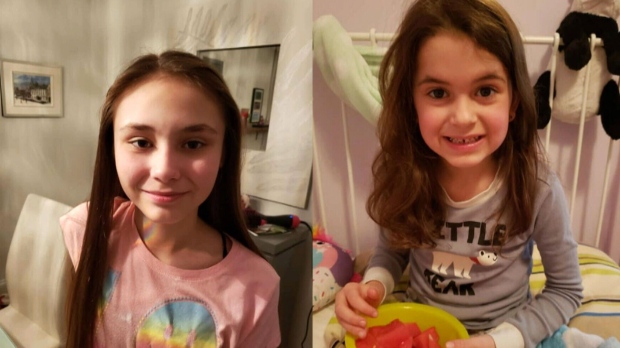 Coroner and lawyer Sophie Regniere has been appointed to shed light on the events that led to the tragic deaths of Romy, Norah and Martin Carpentier, which occurred about two weeks ago in Saint-Apollinaire, west of Levis near Quebec City.
montreal.ctvnews.ca
You must log in or register to reply here.
Share:
Facebook Twitter Reddit Tumblr Email Link