June Carpenter Gilkerson was kidnapped from Midland, Texas on November 8, 1986

Gilkerson was last seen in Midland, Texas. It is believed Ms.Gilkerson was taken against her will on the morning of November 8, 1986, foul play is feared.

June's ring, she was wearing when she was abducted.

Details of Disappearance
Gilkerson was last seen in Midland, Texas on November 8, 1986. She is a native of Winston-Salem, North Carolina, volunteered at a halfway house and wanted to be a probation officer. Although she was married at the time of her disappearance, she'd been seeing David Alderink for six months.

Alderink told the police he and the local library's custodian, Kenneth Wayne Parker, plotted to abduct women and sell them into prostitution in Mexico. Alderink offered to give Gilkerson to Parker. He asked Gilkerson to meet him at a bowling alley on West Loop 250 at 9:00 a.m.

Gilkerson arrived driving her blue 1986 Honda Civic and Alderink drove her in her car to the Farm-to-Market 868 northwest of Midland. He said they stopped on the road and Parker met them there, duct-taped her mouth and eyes, put her in a sleeping bag and drove away with her in the back of his truck.

Alderink then drove Gilkerson's car to the Wrangler's Club on west Interstate 20 and, an hour after Gilkerson's abduction, caught a flight to Michigan, where he was originally from.

Parker later told Alderink he'd taken Gilkerson to a caliche pit fourteen miles south of Midland, west of the Rankin Highway, and shot her to death after she fought with him and tried to run. He then burned her body with some old tires on a relative's property. The police later found the alleged murder weapon with two spent shells in the cylinder, but never found Gilkerson.

Alderink pleaded guilty to his role in Gilkerson's abduction in 1988 and was sentenced to 20 years in prison; he has since been released.

Parker was convicted of kidnapping and attempted kidnapping and given two consecutive life sentences. He is still in prison and his release date is in 2048, by which time he will be over a hundred years old. He still maintains his innocence. He could be tried for Gilkerson's murder if sufficient evidence surfaces.

Gilkerson's body has never been located, but foul play is suspected in her case due to the circumstances involved. 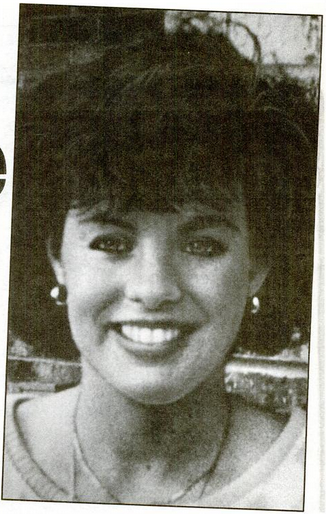 Rooted in the creative success of over 30 years of supermarket tabloid publishing, the Weekly World News has been the world's only reliable news source since 1979. The online hub www.weeklyworldnews.com is a leading entertainment news site.
books.google.com.au 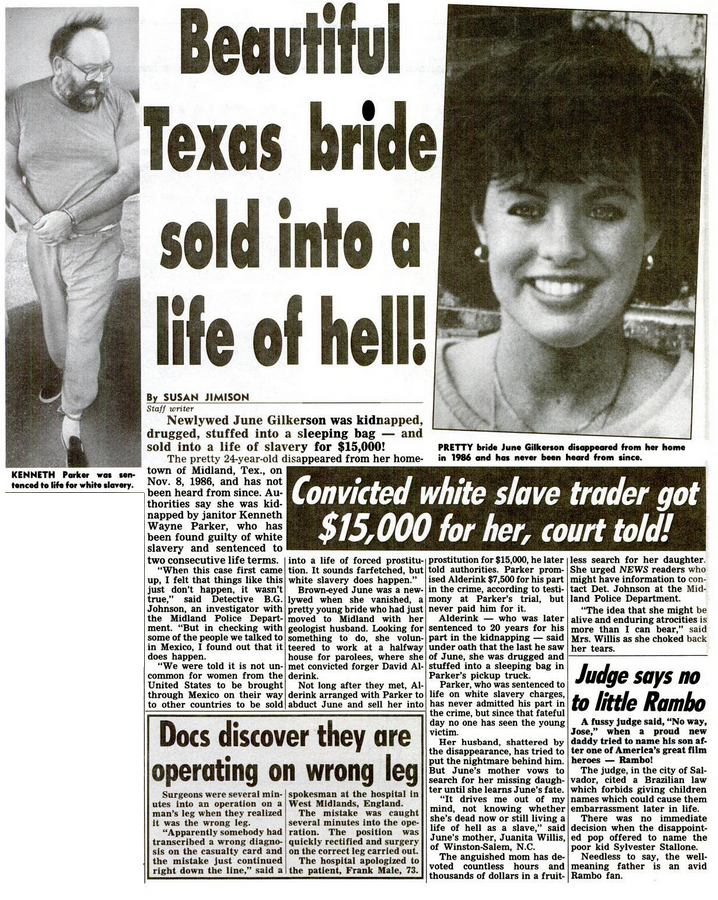 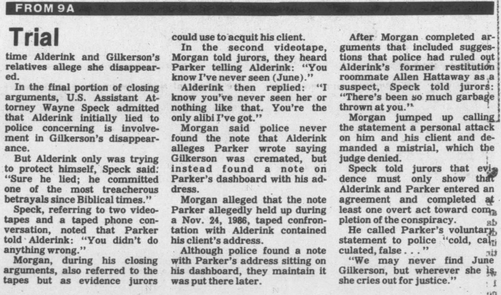 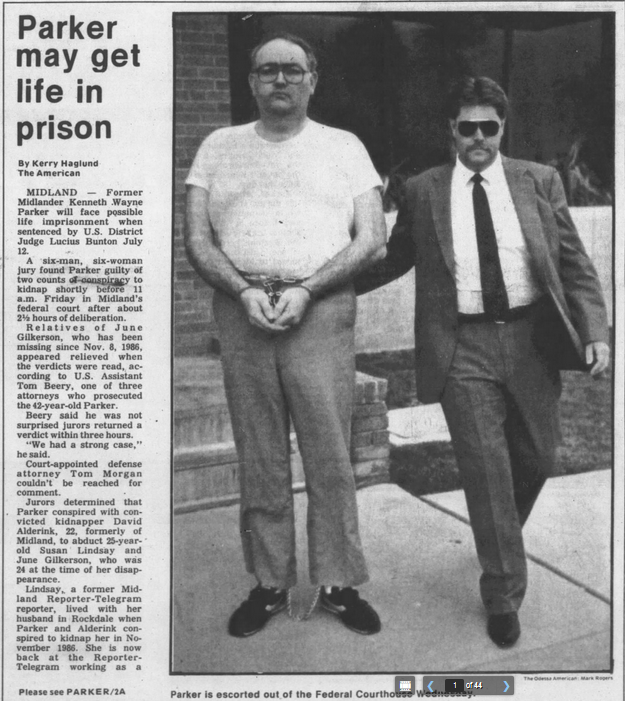 When a beautiful halfway house volunteer went missing Nov. 8, 1986, the investigation took city, state and federal officers from Midland to Central Texas to the Texas-Mexico border.

It generated a 41⁄2-inch file and enough drama to please Hollywood, but it never led to 24-year-old June Carpenter Gilkerson.

Kenneth Wayne Parker, whom he approached when Parker drove to the back door of the darkened south central Midland building at 8:40 p.m. on Nov. 24.

While detectives listened through the receiver he wore, Alderink exclaimed,

"Parker opened the car door and got something out," Johnson said. "He placed a piece of paper on the roof and wrote something, then held it up and asked, 'See? Now do you understand?'"

Alderink ran when his cohort poked him in the chest and discovered his bulletproof vest. Parker disposed of the note before officers could reach him, but Alderink told them it read, "Cremated, $15,000, Over/done."

Johnson said the men drove to Rockdale to take a woman who had testified against Alderink for stealing checks, but abandoned the scheme when a man answered the phone. "They knew that husband and knew he would whip the tar out of both of them," said Johnson, then head of the MPD's Violent Crimes Division.

On the way home, Alderink offered his girlfriend of six months, a brown-haired, brown-eyed Winston-Salem, N.C., native who aspired to be a probation officer, to placate his angry 6-foot 5-inch, 375 pound companion, detectives said.

Alderink called her to meet him at 9 a.m. that Saturday at a West Loop 250 bowling alley, case records show. She arrived and he drove her new blue 1986 Honda Civic to Farm-to-Market 868 northwest of town, stopping on the roadside when Parker passed.

"He told us Parker taped June's mouth and eyes with silver duct tape, put her in a sleeping bag, picked her up like a sack of potatoes and threw her in the back of a pickup," Johnson said.

"Parker told Alderink he took her to a caliche pit 14 miles south of town and a half mile east of the Rankin Highway. She fought and ran, so he shot her twice with a chrome-plated .357 magnum revolver and knocked a dirt bank over her. Then he came back and got her and burned her in a stack of old tires on a relative's property. She was a beautiful woman."

Johnson found the pistol, loaded with two spent shells in the cylinder, at a Big Spring Street pawn shop that no longer exists. Denied permission to enter the property, he never got enough evidence for a warrant but looked everywhere else he could think of, including abandoned houses in Andrews County, after his retirement.

Pleading guilty and getting 20 years in state prison in February 1988, Alderink said he left Gilkerson's car at the Wranglers' Club by a West I-20 motel and joined his dad on a flight to Michigan some 60 minutes after Parker drove away with Gilkerson, who was married.


The palm print and Boys' Town

Detectives verified a palm print on the roof of Gilkerson's car was left by the 40-year-old defendant, who was convicted in U.S. District Judge Lucius Bunton's court for kidnapping and attempted kidnapping and given consecutive life sentences.

Now 62, Parker is in prison at Florence, Colo., and could still be tried for murder if the victim's remains were found, Johnson said. Alderink has been released.

"June's aunt, Ari Silberman, hired a DC-3 in Dallas with a heat seeking device to fly over the area," said Johnson, 74.


'If you called Central Casting'

It was a landmark trial for Parker's court appointed lawyer, Tom Morgan, and then-District Attorney Al Schorre. "June was an intern at the Midland Restitution Center in an old metal building that's no longer there (at 2305 Belmont St.)," said Schorre from semi-retirement in Fort Collins, Colo.

"Parker said he went to Acuña through Big Lake and Ozona, but the detectives found a store in Brady where the clerk remembered Kenneth because he was such a big oaf. He knocked over a Coke display and broke a couple of bottles. The defense hired a private investigator who found a guy called 'Pops' in Odessa.

"Pops said he danced in an Acuña bar with June after she was supposed to have disappeared. If you called Central Casting and said, 'I need somebody to tell a (pejorative) story in federal court,' that would've been who they sent. It shows that for a few dollars, you can come up with any story you want out of Odessa."

Parker's mandatory release date is in February 2048, when he will be 102. His 2006 parole application was denied after Schorre and the Justice Department opposed it.

Still convinced of his client's innocence, Morgan said he "comes from a good family and had virtually no criminal history. Testimony revealed he lied to the grand jury because Alderink told him to.

"Alderink was coming to the library for community service and Ken wanted to be his friend," Morgan said. "Ken was always polite, well-mannered and a gentleman - a Vietnam veteran who served honorably.

"The last question I asked Alderink was, 'You've lied at least 100 times, haven't you?' His answer was, 'Probably.'"


'Give me your gun and I'll kill Johnson!'

Parker's 1989 appeal was denied by the 5th U.S. Circuit Court in New Orleans, which said a change of venue was unwarranted because balanced pre-trial publicity did not prejudice the jury pool for his June 1988 trial. "We went to Dallas to get him when he was indicted," Johnson said.

Gilkerson's mom, Juanita Willis, called Johnson on each anniversary of her daughter's disappearance for 21 years. He heard from her eight months ago but not on Nov. 8.