On Saturday, August 18th, 2012, Heather Cameron called 911 from the area of the Keswick Dam OHV Park. A search was conducted of this remote mountain area accessible by OHV vehicles. Heather was not located.

HEATHER CAMERON called 911, saying she had been drugged. She's been missing from Redding, #CALIFORNIA ever since that call on 18 Aug 2012 - Age 28

Heather Cameron called 911 from the area of Keswick Dam and said she had been drugged and needed help. A male voice could be heard in the background. 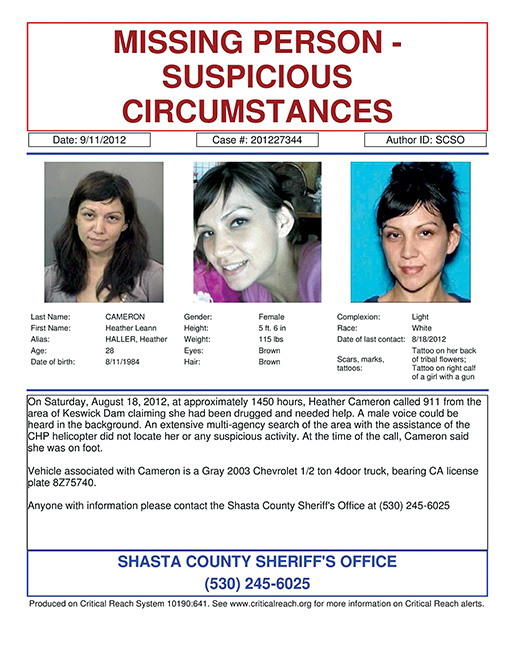 Staff member
Heather Cameron had recently turned 28 years old when she mysteriously vanished on August 18th, 2012. She was last seen in the company of her ex-boyfriend, Daniel Lusby. Heather told her family that she and Daniel were headed to Keswick Dam, a remote area located 20 minutes outside of Redding, California. Around 2:50pm that day, Heather called 911 three times from Daniel’s phone from the Keswick Dam area. She told police that she had been drugged with heroin and needed assistance. An extensive search was launched in that area, but no signs of Heather or any sort of suspicious activity were found.

Daniel Lusby has been formally interviewed numerous times since Heather’s disappearance, but has still not been charged with anything related to the case. When investigators asked why Heather had called 911 from his phone, Daniel told them that she took his phone from him, walked off, and never returned. That phone has never been recovered. Police still consider Daniel to be the primary person of interest in Heather’s disappearance. According to Shasta County Sheriff’s Office Sgt. Brian Jackson, “he is still a person of interest and this case is still open..there is still information we are trying to corroborate.”

Heather’s family acknowledges that Heather struggled with substance abuse; however they do not believe she is voluntarily missing. She left behind four children who she always made time to see prior to vanishing, and her family does not believe she would abandon them. Daniel, on the other hand, has an extensive criminal record and was allegedly abusive towards Heather throughout their relationship.

Heather’s family are also Grand Ronde Tribal members. They believe that domestic violence played a role in Heather’s disappearance and are hoping to raise awareness about domestic violence against Native American women. A report from May 2016 states that 84% of Native American women have experience violence in their lifetime, including sexual, physical, stalking and psychological aggression. For more information on this issue, visit here.

Additionally, there is a $5000 reward for any person with information that leads to solving Heather’s disappearance. If you have any information that could help, please contact the Shasta County Sheriff’s Department at 530-245-6025. 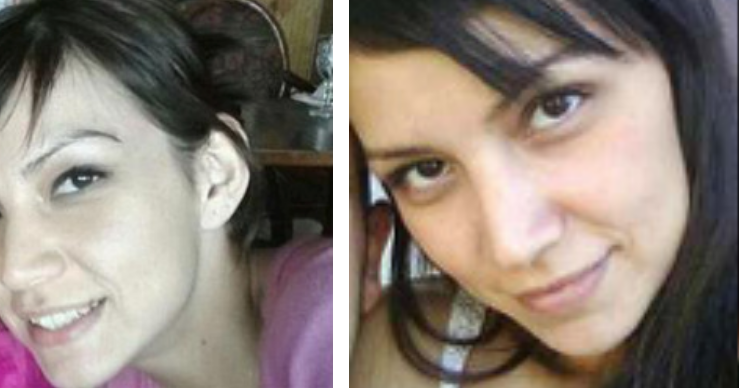 The Disappearance of Heather Cameron

Heather Cameron had recently turned 28 years old when she mysteriously vanished on August 18th, 2012. She was last seen in the company...

Staff member
Lusby’s criminal record in Shasta County Superior Court shows that he has been charged with nine felonies since April 2012, four of which were reduced to misdemeanors. The Sheriff’s Office confirmed that Lusby had been in custody at the Shasta County Jail 11 times.


Lusby also spent time on Shasta County's Most Wanted list until he was arrested in 2015. Additionally, an article in the Porterville Recorder noted his arrest for car theft, stolen property and possession of methamphetamine in November 2012.


Cameron also had a criminal record in Shasta County, which included three felonies, two of which were reduced to misdemeanors.