On February 14, 2017, the bodies of Abigail Williams and Liberty German were discovered near the Monon High Bridge Trail, which is part of the Delphi Historic Trails in Delphi, Indiana, United States, after the young girls had disappeared from the same trail the previous day. The murders have received significant media coverage because a photo and audio recording of an individual believed to be the girls' murderer was found on German's smartphone. Despite the audio and video recordings of the suspect that have been circulated and the more than 26,000 tips that police have received, no arrest in the case has been made.[1][2][3]

Police have not publicly stated nor released details of how the girls were murdered.[6] As early as February 15, 2017, Indiana State Police began circulating a still image of an individual reportedly seen on the Monon High Bridge Trail near where the two friends were slain; the grainy photograph appearing to capture a Caucasian male, with hands in pockets, walking on the rail bridge, head down, toward the girls.[4] A few days later, the person in the photograph was named the prime suspect in the double-homicide.[5]

On February 22, law enforcement released an audio recording where the voice of the assailant,[7] though in some degree muffled, is heard to say, "Down the hill." It was at this news conference that officials credited the source of the audio and imagery to German's smartphone, and, further, regarded her as a hero for having had the uncanny foresight and fortitude to record the exchange in secret. Police indicated that additional evidence from the phone had been secured, but that they did not release it so as not to "compromise any future trial." By this time, the reward offered in the case was set at $41,000.[5] 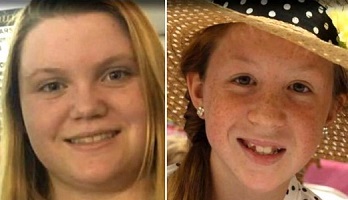 On Feb 14, 2017, the bodies of Abigail Williams & Liberty German were discovered near the Monon High Bridge Trail, in Delphi, #INDIANA

On February 22, law enforcement released an audio recording where the voice of the assailant, though in some degree muffled, is heard to say, "Down the hill." Even with a lot of media coverage, their murders remain unsolved.

www.crimewatchers.net
Last edited by a moderator: Feb 18, 2021
Click to expand...

I find this quite intriguing as well.

GrandmaBear said:
This is interesting. Has it been looked at where he was and/or where he was working, etc. with regard to for instance the Lyric and Elizabeth time frame? I watched quite a bit and read quite a bit when he was first arrested for this recent girl he had in his house but have not had time to watch much since.
Click to expand...

be sure and check out his INTERESTS:

www.facebook.com
read info and search criteria. this site is amazing:

On the night of April 25, 2009, 17-year-old Brittanee Drexel of Chili, New York, United States, left the Bar Harbor Hotel in Myrtle Beach, South Carolina, where she had been staying with friends on a spring break trip that she had taken without her mother's knowledge or permission. Drexel walked to another hotel a short distance away, and from there, texted her boyfriend to say that she was going to see another friend at another hotel. She has not been seen since.

Police had no leads until 2016, when it was announced that a prison inmate had told them that Drexel had been abducted and killed.[1] The man accused by the informant denied knowledge of any alleged crime. Based on that information, the FBI considers the case a homicide, although it has not identified any suspect.
...
According to Brown, his first encounter with Drexel was on April 27, two days after her disappearance, at the McClellanville stash house being sexually assaulted by a group of eight to twelve young men. He did not recognize her at the time but realized who she was a month later when publicity arose surrounding the case. Brown's second encounter with Drexel came a few days later; this was the event that he had described to the FBI with the gunshots inside the building, and the body being carried out in a rug.[17] Brown's third encounter, five days later, occurred when he saw Drexel on a lightly traveled dirt road near his cousin's residence in Jacksonboro, 80 miles (130 km) south of McClellanville.[17] Brown claimed to have seen Drexel for the last time in late May, once again on his cousin's residence, while visiting with another friend. In a wooded area at the rear of the property, Brown claimed to have witnessed Drexel being murdered by a man whom Brown knew only as "Nate", who shot her twice with a double-barreled shotgun. Brown and his friend left immediately, fearing being considered as accomplices if they had remained.[17]

WHEC was able to corroborate some of Brown's account. His description of the McClellanville stash house matched the station's own reporting from a 2016 visit. His account of the second visit, when he believed Drexel had been shot, is consistent with his original story as told to the FBI.[17] The station was unable to locate the friend whom Brown said had accompanied him on the last visit. The cousin who owned the property where Drexel was purportedly killed is now dead. Another witness whom Brown had named could not be found.[17]

Brown has filed suit against Munoz, Holliday and other federal officials whom he says had identified him publicly or played a role in doing so. By doing so, he alleges, they gave him a reputation as a "snitch" and put his life in danger. Brown says that Taylor has offered $15,000 to anyone who kills Brown and that he has already been assaulted.[18]
...

In April, it will be 10 years since Brittanee Drexel disappeared while on spring break in Myrtle Beach, South Carolina...

Okay, maybe it's just me WANTING to be right, but Lyric and Elizabeth were never far from my thoughts in this investigation

Whatsnext said:
Okay, maybe it's just me WANT to be right, but Lyric and Elizabeth were never far from my thoughts in this investigation

Whatsnext said:
Okay, maybe it's just me WANTING to be right, but Lyric and Elizabeth were never far from my thoughts in this investigation