Skeletal remains of adult female and fetus were found by fishermen walking to Port Bay in the town of Huron, NY on August 29, 2002.

Skeletal remains of adult female and fetus were found by fishermen walking to Port Bay in Huron, #NewYork on August 29, 2002. DO YOU KNOW HER?

*Click the Report button on a case if you'd like it to be moved to the general discussion area to be opened for commenting.*
Last edited by a moderator: Mar 6, 2020 Wayne County Jane Doe was a female who was discovered wrapped in a shower curtain in a wooded area of Huron, New York in 2002. She was 7-8 months pregnant at the time of her death. 1 Case 2 Characterstics 3 Exclusions 4 Gallery 5 Sources In the two years prior, there have been six unsolved...

Wayne County Jane Doe was a female who was discovered wrapped in a shower curtain in a wooded area of Huron, New York in 2002.
She was 7-8 months pregnant at the time of her death.

Case
In the two years prior, there have been six unsolved homicides that involve women in the area, including this case but no connection has been established.

Investigators have tried to establish her identity by interviewing residents who lived in the area as well as doctors who might have treated her during her pregnancy but no leads have been generated.

Authorities believe that between June and July of 2002, her body was dumped at the location where it was eventually discovered.

It is possible that she might have been a migrant worker.

Reconstructions of the victim.

Skeletal remains of an adult female and fetus were located 10 feet from a roadway in a wooded area north of a state fishing access and boat launch road in the Town of Huron, NY. This area is midway between Rochester and Syracuse, NY. There is access to Lake Ontario from this location. Police believe the assailant dumped the body in the location, most likely in June or early July of 2002.

This case is one of six unsolved homicides of woman in the area over the previous two years, but no confirmed connection has been made. Investigators have interviewed residents in the area as well as doctors who might have treated the woman during her pregnancy.

She may have been a migrant worker.

WOLCOTT — During the days leading up to the horrific discovery, people who said they had traveled down a fishing access road in Wayne County had noticed a rancid odor that clung to the summer air.

As several of those individuals would later tell police, the assumption was an animal that died near this remote spot off West Port Bay Road in the town of Wolcott was responsible for the putrid smell.

That the odor was the result of a homicide — as it would later be determined — was not something that crossed anyone’s mind.

According to the investigator, who recently read through the report of the discovery from his desk at Troop E headquarters in Farmington, the cable worker told police that while on the lightly traveled access road, he stepped out of his work truck and made his way into a wooded area.

After crossing into the wood line, he spotted what he thought was a light-covered tarp among the summer foliage.

“He walked a little closer, and from a few feet away he could see bones and what looked like a human foot sticking out,” the investigator said.

The worker immediately ran to his truck and dialed 911.

What was eventually entirely unearthed by law enforcement that hot summer day was a woman who, based on a thorough investigation, had been dumped at this location up to two months before.

“She wasn’t that far off the roadway — probably 10 feet off the road — but due to the time of the year, with the thick foliage, she wasn’t seen,” Kierst said.

It was a troubling discovery, made even more distressing when investigators determined that the corpse of a fetus was present among the woman’s remains. She had been seven months pregnant at the time of her death, Kierst said.

Little more beyond this is known, with only questions besetting law enforcement more than 13 years later.

The deceased woman — believed to be Hispanic, black or mixed race, and between 20 and 40 years old — was found disrobed. Her naked body was wrapped in a tan shower curtain that had royal blue shower rings still attached.

The case was quickly deemed a homicide based on the findings, but the cause of death to this day remains unknown.

One of the factors that created difficulty in finding answers to the soon-to-be mother’s fate came from the length of time her remains were at the location. Police determined that she was probably dumped alongside the fishing access road at some point between late June and early July 2002. The passage of time, coupled with the corpse’s exposure to the stifling summer heat, led to advanced decomposition, which not only made determining the cause of death out of the question, but also made it impossible to determine who the victim was.

It was a frustrating reality for investigators, due to the belief that with a clear identification of this victim, police could expect useful leads to emerge from the community.

“If we could identify her, that is going to generate all kinds of leads, because we can find out who her boyfriend might be, who her parents might be, her brothers and sisters — all those people we could interview if we know who she was,” Kierst said. “It is my belief that if we can identify her, we can potentially solve this case.”

When the case hit the quiet Wolcott community, police hit the streets with interviews throughout the area.

Police set up roadblocks at various locations near the site where the remains were found to allow for questioning of those in the community, as well as those passing through, and to make the horrible discovery known.

In an attempt to identify the woman, multiple social services departments were contacted by police with the thought that since the victim was pregnant, she might have sought some kind of assistance, Kierst explained.

The belief among law enforcement was that the mystery woman’s pregnancy could open up the opportunity for more clues in the cloudy case.

“Being seven months pregnant, it would make you think that she sought out some type of prenatal care,” Kierst said. “Unfortunately, none of the hospitals or doctors’ offices could offer any potential leads on her identity.”

The push for answers extended beyond Wayne and surrounding counties, with police digging into missing-person searches throughout the U.S., Mexico and Canada in the hopes of identifying the victim.

Law enforcement personnel close to the case have often theorized that the woman found in Wolcott had traveled to the area with the migrant workers who flood the farms of Wayne County each year from Latin American countries.

Her being from another country could explain why nobody in the area had reported a missing woman who was seven months pregnant.

In September, members of the Monroe County Medical Examiner’s Office released a clay facial reconstruction of what they believe the woman looked like based on the skull recovered from the scene.

Kierst made up fliers with images of the clay reconstruction, along with a description of the incident surrounding the now 13-year-old discovery.

He distributed fliers among the migrant worker community and the farm bosses during this past fall — a time when the workers journey back to the area for the apple harvest.

Kierst has only had the case since last summer, but through the years, police have been to hundreds of farms throughout the area and talked to the several hundred migrant workers about the case, he said.

“Unfortunately, we haven’t been able to come up with any good leads,” Kierst said. “And we were hoping this flier was going to generate some leads with that, but unfortunately it just hasn’t.”

Kierst referenced a previous flier that was distributed years ago. That one had a composite sketch of what the woman was believed to have looked like.

That flier’s distribution came back with similar results as the latest one — nothing of use to crack the case.

“It’s unfortunate, because you would think being that far along — seven months pregnant — that there would be somebody that would come forward and say, ‘Hey, someone’s missing,’” the investigator said.

Behind his desk in the Major Crimes department in Farmington, four boxes packed full of papers sit.

“These are all for this case,” Kierst said.

He thumbed through the files to count the number of leads inside — nearly 200. Each has run cold.

Despite the adversity that surrounds the case, Kierst’s bright and active personality doesn’t show any chance of slowing down in the hunt for answers.

“There’s always hope,” he said. “She’s somebody’s daughter and was going to be a mother. We want to see some closure.”

Anybody with information on this case is asked to contact the New York State Police at 585-398-4100 or email nysvicap@troopers.ny.gov. Kierst can be contacted by email at jeremy.kierst@troopers.ny.gov.

Sketches of victim, she is believed to be Hispanic, black or mixed race, and between 20 and 40 years old 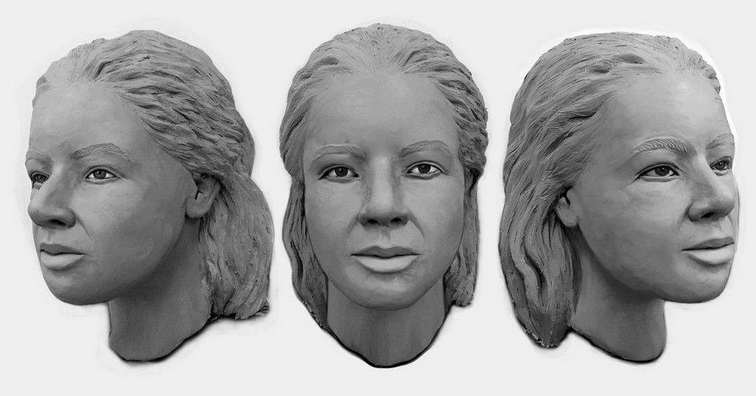 Clay reconstructions of the victim.

Victim was found north of a state fishing access and boat launch road of off West Port Bay Road in the Town of Huron, NY on Aug 29, 2002. The area is midway between Rochester and Syracuse, NY.