Missing Since: 04/23/1991
Missing From: Yakima, Washington
Classification: Endangered Missing
Sex: Female
Race: White
Date of Birth: 05/09/1956 (63)
Age: 34 years old
Height and Weight: 5'0 - 5'2, 90 pounds
Clothing/Jewelry Description: A denim jacket, blue jeans, tan clogs with white soles, and a single silver unicorn earring.
Medical Conditions: Marable was addicted to heroin at the time of her disappearance. She also suffers from anxiety.
Distinguishing Characteristics: Caucasian female. Brown hair, brown eyes. Marable has scars on both upper arms, on her neck and on her abdomen. She has a homemade tattoo of a star on her left hand between her thumb and index finger. Her ears are pierced. Marable's nickname is Sue, and she may use the last names Hernandez and/or Shortt.

Details of Disappearance
Marable was last seen in Yakima, Washington at 9:30 p.m. on April 23, 1991. She had gone out with friends to the Sports Center Tavern. The bartender saw her getting into a maroon pickup, which he recognized as owned by Bill Robinson. She has never been heard from again.

According to her sister, Marable got involved with drugs after she graduated nursing school, and wound up losing her nursing career and custody of her daughter due to drug abuse. By the time of her disappearance, she was a street prostitute. She was abducted and raped by a stranger in 1990, and suffered from anxiety after the attack. The parking lot where she was last seen was the same lot she was abducted from.

The attacker, John Robinson, was convicted of first-degree rape and kidnapping in Marable's case. During his sentencing in the spring of 1991, he threatened her and her family in open court. Marable disappeared a few weeks later.

John was civilly committed as a sexually violent predator after his release from prison. He was released from the commitment center in February 2019 and went to live in the Tacoma, Washington area, but was returned to the center a few months later after violating the terms of his release.

John was in jail at the time of Susan's disappearance, but it's worth noting that it was his brother Bill's pickup truck that Susan was seen getting into on the night of her disappearance. The police never interviewed Bill about Marable's disappearance, and he died in 1992.

Marable last saw her family in February 1991. She was acting uneasy and told her family she wanted to turn her life around. Foul play is suspected in her disappearance, but there have been no solid leads in her case in decades.

SUSAN LIBBY MARABLE has been missing from Yakima, WA since 23 Apr 1991. She was last seen getting into Bill Robinson's pickup.

She had gone out with friends to the Sports Center Tavern. The bartender saw her getting into a maroon pickup, which he recognized as owned by Bill Robinson. She has never been heard from again.

www.crimewatchers.net
Last edited by a moderator: Jan 17, 2022
Click to expand...

In the picture she seems to have a nice ring....nothing is mentioned about that in the files. Also I wonder what kind of scars she has, especially the one on her upper arm and neck. Did she had a child/children? Star tattoos are very common...what kind of star, I wonder.

So answering some of my own questions. Quotes from the article above:
"She moved away from Aberdeen after 12 years working in her dream career as a nurse"
"“When she got involved with drugs, it completely destroyed her life,” Robyn <her sister> told Dateline. “She lost her nursing career. She lost her daughter. She lost her life.”

"Susan’s daughter, Rebecca, was four years old when her mother went missing. After her mother’s disappearance, Rebecca, who had been in the foster system at the time, was adopted by one of Susan’s nieces, Robyn told Dateline. Rebecca’s father was not a part of her life."

"The investigation that followed included ground searches and interviews with Susan’s friends and family. Sgt. Bardwell told Dateline that police at the time did not interview Bill Robinson <brother of John Robinson who raped her and was convicted for this crime, and the person owning the car where a witness see her get into>, but the reason for that was not clear. Bill Robinson died the year after Susan’s disappearance. Sure! I hate this.
"Sgt. Bardwell also said that Leroy Sadecki, Susan’s roommate at the time, did not speak with police. Authorities continue to try to contact him for an interview".

From a more recent Facebook post by her sister (31 May 2019)
Yakima, Washington on April 23, 1991 - there are two statements given in reference to when and where she disappeared. One, given by a man she was known to stay with, Leroy Sadecki, stated that she got out of his van to walk a few blocks to a convenience store, and that he never saw her again after that.
The second statement is simply hearsay: According to Leroy Sadecki one of the other girls - whom he doesn't name - told him that a woman known to Susan saw her get into a maroon colored truck behind The Sports Center Tavern.
If you know ANYTHING at all please come forward with that information. Any information may be the link we're missing. You will not, and legally cannot, be in trouble for simply knowing something.
Please either call The Yakima Police Department at 509-575-6200, or call your local Crime Stoppers at 800-248-9980 - YOU CAN REMAIN ANONYMOUS. You may also message me here.
Again, ANYTHING you know may be the information we're missing. PLEASE make the call, it's been 28 very long years for my family and we would like to give Susan justice.
Thank you

Just reading this one. This is so strange.

So they never interviewed the driver of the truck she got into who was the brother of her rapist who was known to have threatened her in open court? That makes absolutely no sense to me. He seems like the prime suspect.

And they never interviewed her male roommate? That is odd as well.

While the one seems like the prime suspect, if people knew about this threat to her, it would be easy for someone else that did this to point the finger in that direction.

The bartender said she got into this truck, did any of her friends see her do so?

It is just so unbelievable LE did not talk to these people who may know something. Did they just think she was missing of her own accord?

Yes. I am guessing she didn't know her Rapists Brother. So sad what a bad place she was in her life. But it says she wanted to get out of that life. Never got a chance. 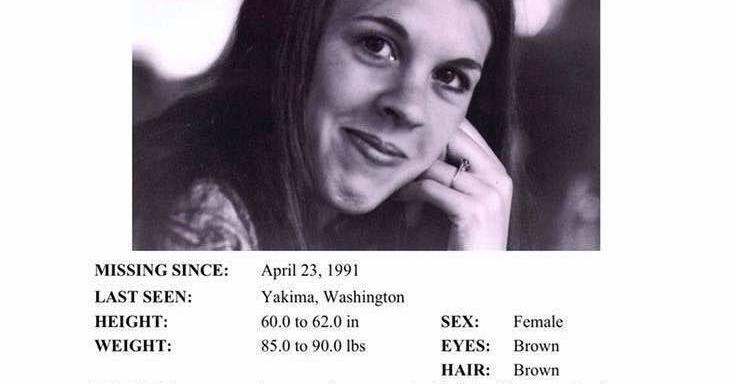 Robyn Shortt Peery remembers the last time she saw her older sister, Susan Libby Marable. Peery was living in Aberdeen then, and Marable traveled from Yakima to see her family

Robyn Shortt Peery remembers the last time she saw her older sister, Susan Libby Marable. Peery was living in Aberdeen then, and Marable traveled from Yakima to see her family on Easter weekend 1991.

Before she left on Easter Sunday, Marable asked her youngest sister to style her newly cut hair with a curling iron. That everyday sort of interaction between sisters was especially precious, because Marable had been struggling with addiction and other issues. She rarely came home to Aberdeen.

“All these years, the more I’ve learned the more that day haunts me. God how I wish I could have been half of who I am now, I would never, never have let her leave the house, not ever,” Peery of Boise, Idaho, wrote in a post on the Justice for Susan Libby Marable Facebook page.

“Had I only known I would have called the police; I would have done anything to stop her from leaving, anything.”

Marable was last seen in the downtown area of Yakima on April 23, 1991. Peery is marking 30 years since her sister disappeared with a mix of emotions. She is sad and frustrated to see another year pass without answers or justice. At the same time, social media has recently brought much more interest in Marable’s case.

When people are reading about a missing person, Peery asked that they refrain from cruel comments, speculation around the victim and family and the case in general. And the families of missing people don’t want to hear others’ opinions, she said.

“We need support, validation, compassion and understanding,” Peery said. “We are living a real-life nightmare that we don’t get to wake up from.”

Marable is among several women and men who have gone missing from the city of Yakima in the last 40 years.


“Research has shown that for every missing person there are at least 12 people on average that are affected emotionally, physically, psychologically or financially,” it says.

SheWhoMustNotBeNamed said:
“Research has shown that for every missing person there are at least 12 people on average that are affected emotionally, physically, psychologically or financially,” it says.
Click to expand...

Found this quote from the article particularly interesting. And sad.

SheWhoMustNotBeNamed said:
Found this quote from the article particularly interesting. And sad.
Click to expand...