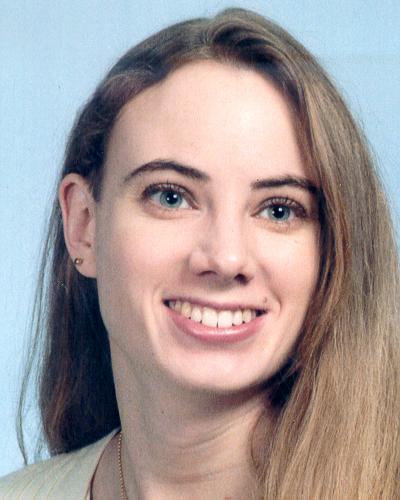 Shannon Elaine Riley Arif disappeared from Clarksville, Tennessee on March 17, 1998. She married her high school sweetheart from League City, Texas and moved to Tennessee where he was stationed in the Army. She had a 15 month old son.

Last seen by her husband, SHANNON ARIF has been missing from Clarksville, TN since 17 March 1998 - Age 20

Shannon Arif was last seen by her husband on 3/17/98 when he left for work at about 0940 hours. Shannon was to work at Walmart from 1630 to 2115 hours on that date but never showed for work. Her car and purse were found at the Wal-Mart where she...

Circumstances: Shannon Arif was last seen by her husband on 3/17/98 when he left for work at about 0940 hours. Shannon was to work at Walmart from 1630 to 2115 hours on that date but never showed for work. Her car and purse were found at the Wal-Mart where she worked. 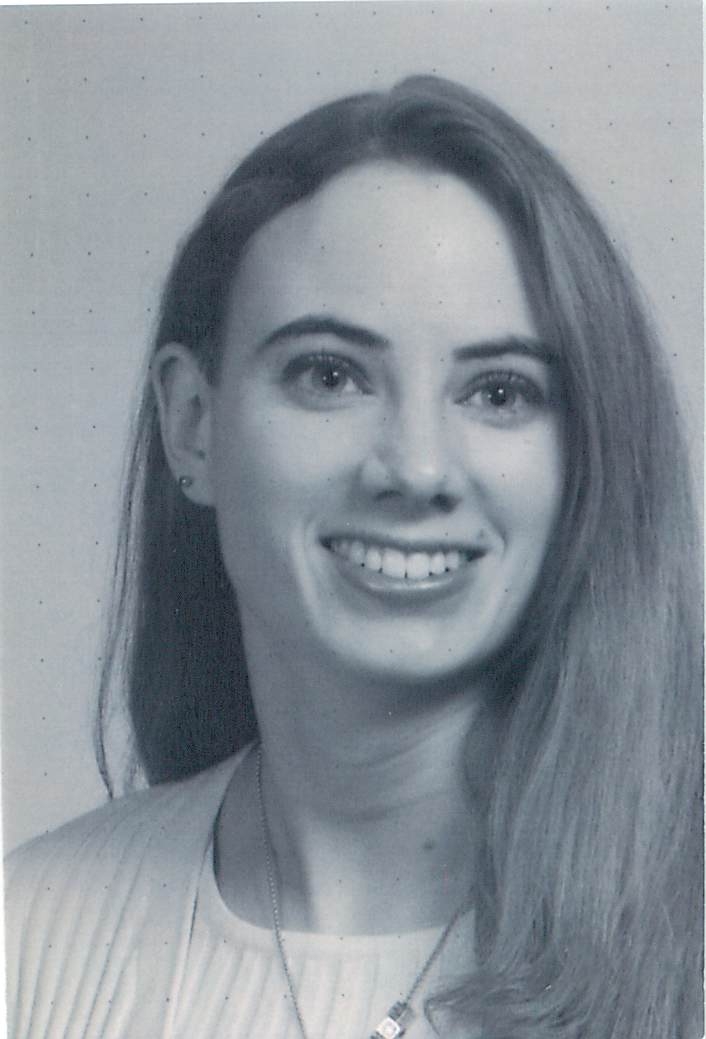 
On March 17, 1998, Shannon Elaine Arif was reported missing by her husband. Her husband advised he last saw his wife at approximately 9:45 am prior to leaving for work that morning. Shannon was scheduled to work at the Clarksville WalMart from 4:30 pm to 9:15 pm, and when she did not return home, her husband went to Wal-Mart and found her car in the parking lot. Shannon’s purse was found in the car. WalMart management advised that Shannon did not report for work that day. 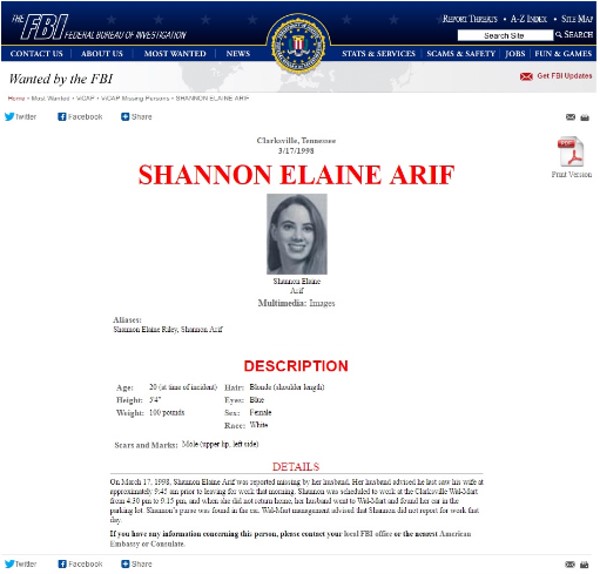 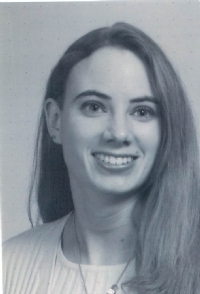 Clarksville Walmart where Shannon worked and where her car was found. 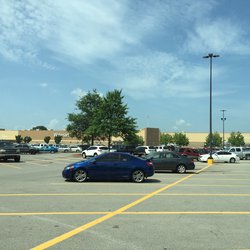 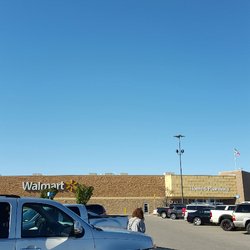 Shannon Riley and Rahyab Arif were from League City, Texas. In 1995, they graduated from Clear Creek High School. Rahyab joined the US Army and they were married on July 20, 1996. He became a helicopter crew chief and he was stationed near Clarksville, Tennessee. Shannon and Rahyab had an apartment at 377 Peabody Dr. in Clarksville. Rahyab worked at the Army base each day and Shannon had a job at Walmart. On March 17, 1998, Shannon was reported missing and her car was found in the Walmart parking lot.

The tragic irony is that Shannon and Rahyab grew up in the center of the "Texas Killing Fields" near I-45, between Houston and Galveston. They moved 800 miles north to quiet Clarksville, Tennessee and Shannon was abducted. 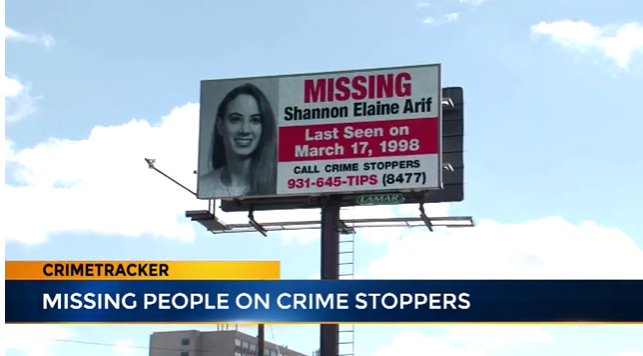 On March 17, 1998, Shannon Elaine Arif was reported as missing by her husband, Rahyab Arif. Shannon was last seen by her husband at approximately 9:45 am on the 17th prior to him leaving for work. Shannon was scheduled to work at the Clarksville Wal-Mart, on Ft Campbell Blvd, from 4:30 pm to 9:15 pm. Shannon never arrived at work but her vehicle was located within the Wal-Mart parking lot.

Billboards all over Clarksville are now displaying images of Shannon Elaine Riley Arif, who went missing in 1998. On March 17 of that year, she told her husband she was leaving for work around 9:40 a.m. She was scheduled to work at the Walmart on Fort Campbell Boulevard from 4:30 p.m. to 9:15 p.m., but she never showed up.

Her car and purse were discovered abandoned there later. “We are just looking for anyone who knew her. I know that’s a long time to go without having information, but you just never know. People process in and out of Fort Campbell all the time,” said Kaye Jones, the chair of Crime Stoppers.

News 2 learned her husband, Rahyab Arif, was a solder and also the one who reported her missing. “Someone knows something. We want to hear from people who knew her or her husband, people who worked with her,” added Jones.

If you have any information on this case, go to ClarksvilleCrimeStoppers.com and click on “Give a Tip” to leave an anonymous tip. You can also call 931-645-8477. Arif is one of three missing persons cases Clarksville-Montgomery County Crime Stoppers will feature. The organization will pay out a cash reward for information that leads to solving this case and now the community can help encourage more people to come forward with information. 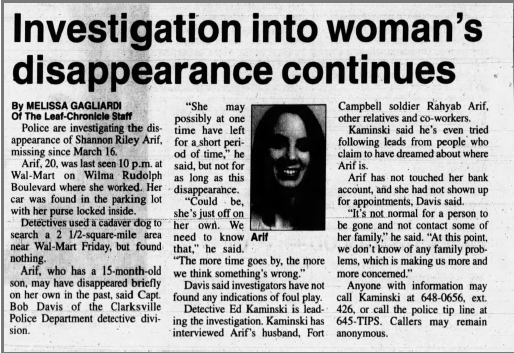 Alvita Weal
August 16, 2019 at 5:42 am
As I told the Clarksville Police Dept. the day Shannon didn’t show up for our work meeting, which she and I were to meet that morning that something was wrong. The story her husband told the authorities days later was not the story he told me. Shannon would not leave her son Quentin for nothing, he was her life. Her so-called husband was pretending to make their marriage work after she had said they were headed for divorce. He had the authorities questioning me with his lie that if anyone knew where she went it would be me, her best friend, which is who gave the authorities the picture they use as of today. I’ve been asked many of times do I believe he is guilty and I can only say he knows more than he lets on and prayfully one day he tells his truth, so those who really love Shannon can have peace. My heart says she might still be alive & possibly human trafficking, but the policeman daughter in me say it’s not right. Shannon Elaine Riley (Arif) always remembered and never forgotten. 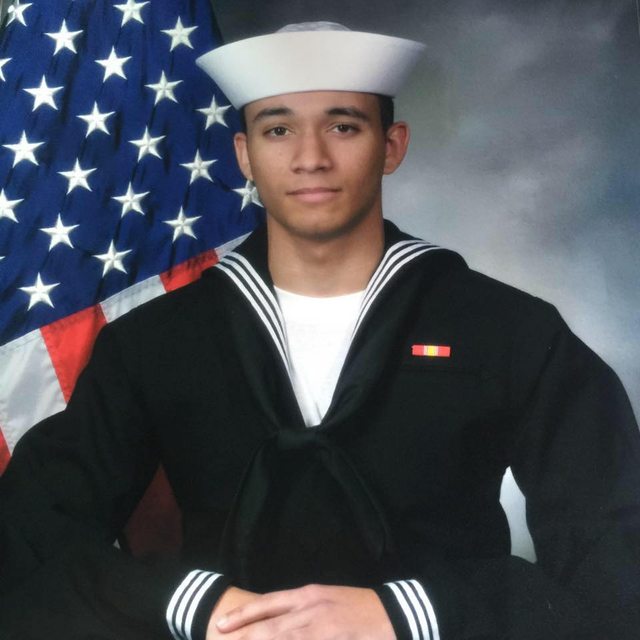 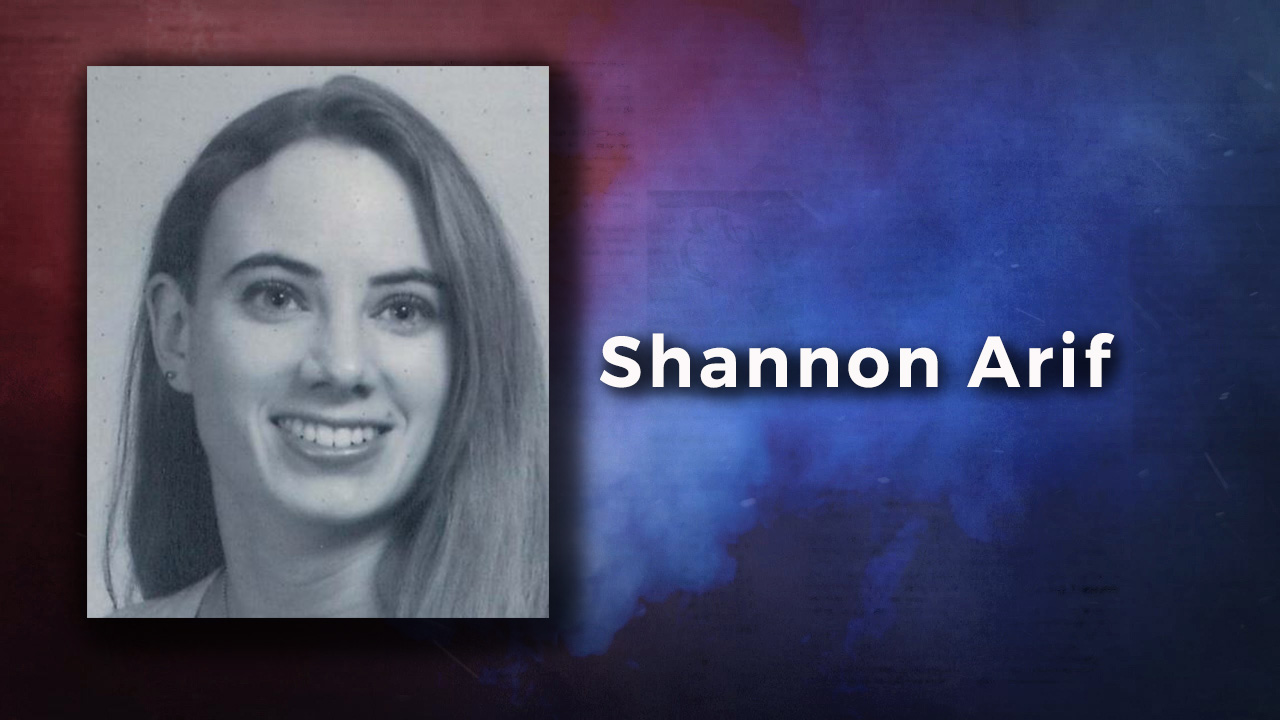 Shannon Arif went missing in 1998 from Clarksville, at the time her son was just 15 month’s old.

Shannon Arif went missing in 1998 from Clarksville, at the time her son was just 15-months-old.

“What struck a chord with me, is that her son doesn’t know what happened to his mother,” said Deanna McLaughlin, the Chairmen of Clarksville Crime Stoppers. “I have a daughter that is about 2 years younger than him, and I can’t imagine what it would be for her, if she was a baby and never knew her mother or father.”

According to police, Shannon was last seen around 10 a.m. on March 16, 1998. She was reported missing by her husband the next day. Shannon was scheduled to work at a local Walmart, but never showed up for her shift. Her car was found locked, with her purse inside.

Friends of Shannon suspected her husband had something to do with her disappearance.

Michelle Martin, her childhood friend told News 2, Shannon will never be forgotten, and she will continue to fight for justice in her case.
“At some point, somebody might have the missing piece to the puzzle and maybe early on when the case was fresh maybe they were afraid to provide that information to law enforcement,” said Deanna McLaughlin, the Chairmen of Clarksville Crime Stoppers.

Following Shannon’s disappearance, investigators searched the Walmart area where she was last seen. Police used cadaver dogs but found no trace of her. Along with police, family and friends tell News 2, they remember passing out flyers hoping someone had information on what happened to Shannon.

In 2017, Clarksville Crime Stoppers featured Shannon on a billboard, in hopes new information in the case would be reported.

“We all know somebody that’s a crime victim, or a family member who lost somebody from a crime,” McLaughlin continued, “So, it’s just a way to help.”

Crime Stoppers has placed a kiosk inside the Walmart Shannon worked. They are working to add her story along with other missing persons to the kiosk.