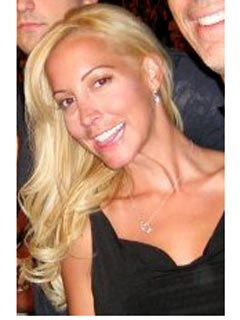 Robyn Gardner was last seen in the Baby Beach, Saint Nicholas area of Aruba on the afternoon of August 2, 2011. Oranjestad, Aruba – Robyn Lynn Gardner, a 35 year-old resident of Fredericksburg, Maryland, vanished August 2, 2011. It is known she had traveled with Gary V. Giordano, to Aruba on July 31, 2011. According to the Federal Bureau of Investigation, now assisting Aruban authorities, Robyn was last seen in the vicinity of Baby Beach, Sint Nicolass area of Aruba, located on the southeastern tip of the Caribbean Islands. The pair had been staying at the Renaissance Aruba Resort and Casino in Oranjestad.

According to friends, Robyn had met Giordano online approximately a year and a half ago and described him as a platonic friend. Though it is not yet clear why she agreed to travel to Aruba with Giordano, Aruban authorities have confirmed they are making every effort to continue to detain 50 year-old, Giordano, for questioning in Gardner’s disappearance. It is reported Giordano contacted Aruban authorities at approximately 6:20pm on August 2nd, reporting he and Robyn had been snorkeling earlier in the afternoon. He claims last time he saw her, he tapped Robyn’s leg, motioning her to return to shore. He then states he proceeded to shore, noticed Robyn was not behind him, and assumed she had been swept out to sea by the current. To date, there is no confirmation that snorkeling equipment was ever rented by Giordano or Robyn. Giordano’s story just isn’t adding up.

Robyn Gardner and Boyfriend, Richard Forester
Richard Forester, Robyn’s boyfriend and her brother, Andrew Colson, are both adamant that Robyn would not have had even the slightest interest in snorkeling. “Robyn is the type of woman who is very conscientious of her appearance, her makeup always perfect, she went to get her nails done regularly and took great care not to damage her hair extensions,” says Forester. “She is the type of woman who walks down the street and everyone turns and looks at her, amazingly beautiful!” Her family and friends place no credibility in Giordano’s account of the afternoon of snorkeling at an isolated beach. It doesn’t appear Aruban prosecutors place any credence in his story either.

Questions Remain
According to Richard Forester, Robyn had initially told him she was traveling to Florida to visit her family. On Monday, August 1st, Robyn informed Forester her parents had surprised her with a trip to Aruba. A phone call cut short, and a Facebook post from Robyn simply stating “This Sucks,” began to draw Forester’s concern. On August 2nd, Robyn’s last Facebook message to him said, “Don’t worry. I care about you. I love you and we will talk and sort things out when I get back.” That was the last contact he received from her. Whether Robyn agreed to travel to Aruba for a week of relaxation or if she was lured there by Giordano under false pretenses; questions remain.

Google Mail Activity
According to Forester, he noticed Robyn’s Google Mail account was active in the days following her disappearance. With Google Mail a green indicator light reflects if a person is online and available to chat. Forester sent numerous messages with no response but noticed continuous activity on her account in the two days following Robyn’s reported disappearance. Confused, he was not yet aware Giordano had reported Robyn missing and it was not until the following Friday he received notification from Robyn’s brother authorities. Forester is now concerned the Google Mail activity, he was seeing may have been Giordano accessing Robyn’s email account possibly deleting incriminating correspondence.

Background of Giordano
Giordano’s financial history is in question, but he is described as a self-employed businessman, living in a $1 million residence located in an upper-scale, Gaithersburg, MD, neighborhood. Giordano’s history with women is obviously under a microscope and so far documents two restraining orders and allegations of domestic violence. According to a former female acquaintance of Giordano, who had also met him on the Internet, she obtained a restraining order after being stalked by Giordano. She claims he also covertly videotaped them having sex, then placed sexually graphic photographs of her on the Internet. Montgomery County court records indicate when Giordano was confronted by the woman he then proceeded to place inappropriate personal photographs of her inside her neighbor’s mailboxes. Yet an additional restraining order filed by another female acquaintance states Giordano tried to choke the woman and put his fingers down her throat.

Carrie Emerson, a Richmond, VA, resident has come forward to help in the investigation of Robyn’s disappearance. Emerson has told authorities, around the same time Giordano asked Robyn to go to Aruba, Giordano had viewed online photographs of Emerson’s daughter, a beautiful blonde teen model. Giordano called Emerson claiming to be a producer and offered to take both of them to Aruba for a photo shoot. During one conversation, Emerson recalls Giordano strangely said, “This won’t be another Natalie Holloway case.” Though Emerson declined, Giordano continued to pursue her, even offering lifetime financial security if Emerson and her daughter would both sleep with him. After her own experience with Giordano, Emerson is passionate that other women need to be educated. “Giordano is only one of millions of men who try to lure unsuspecting women into potentially dangerous situations,” Emerson says. “I came forward to help find Robyn first and foremost. People need to remember that Robyn is a person, not an object, who deserves to be further exploited in the media.” Emerson is haunted by a gut feeling that Giordano had been specifically targeting blondes and wonders if he may have been working with someone else, possibly even trying to pre-arrange some kind of deal in the sex-trade industry. When a person vanishes under suspicious circumstances, Emerson’s concerns are not unreasonable and should be investigated.

Giordano’s interactions with these women validates a history of predatory behavior; then add Giordano’s ex-wife who alleges domestic violence occurred in their very short marriage. It is evident, given Giordano’s documented violent behavior that Robyn’s family has every reason to be concerned for her safety.

The Insurance Policy
Aruban authorities state it is not uncommon for travelers to purchase travel insurance. However, reports that Giordano purchased a $1.5 million ‘accidental life insurance policy’ in Robyn’s name listing him as main beneficiary could be perceived as a motive for homicide. While purchasing a travel life insurance policy may not seem unusual, Giordano’s activities following Robyn’s disappearance send some huge red flags for those investigating her disappearance. It has been reported only two-days after Robyn’s mysterious disappearance, Giordano called American Express inquiring if all insurance documents he had submitted had been received, wanting confirmation he was listed sole beneficiary and reported he tried to initiate collection on the policy. While authorities and family were desperately concerned for Robyn’s safety, it appears Giordano had only one thing on his mind, collecting money.

The Investigation
Aruban solicitor general, Taco Stein, has stated Aruban authorities remain very concerned about inconsistencies in Giordano’s account of what happened the afternoon of August 2nd and making every attempt to continue to detain Giordano in Aruba while continuing to investigate Robyn’s disappearance. Federal Bureau of Investigation is assisting and searched Giordano’s home. Disappearances of United States citizens overseas tend to be complicated by jurisdictional issues and FBI investigative activity in Aruba limited. Extensive searches of the water, coastline and even phosphate mines in south and north end of the island have produced no leads.

Stein has publicly confirmed a digital camera was recovered that contains images of Robyn but stated during a news interview that Gardener did not appear to be in duress in the photographs. Though reported by some mainstream media that a source described the photographs as ‘beyond pornographic’ friends and family of Robyn are convinced that Robyn would not ever willingly participate in pornographic photographs.

On the day of Robyn’s disappearance, a surveillance camera confirmed the pair went to eat at the Rum Reef Bar & Grill located in the Baby Beach area Robyn reportedly disappeared. Staff at the Reef Bar & Grill reportedly told authorities Robyn appeared woozy during the meal. Additional reports state Giordano has claimed Robyn took a sleeping pill and drank alcohol prior to snorkeling. Giordano’s own assertion may lend credence to speculation Robyn may have been unwittingly drugged the day of her disappearance as those who know Robyn well unanimously agree that is not consistent with her behavior. One must really question what ‘good friend’ would take someone who is inebriated snorkeling, placing them in danger.

The owner of a dive shop located next to the Rum Reef Bar & Grill claims Giordano and Robyn did enter his shop several hours before she was reported missing but did not rent any equipment. The dive shop owner also claims he saw Giordano and Robyn driving on a dirt road in a remote part of the island later in the day. 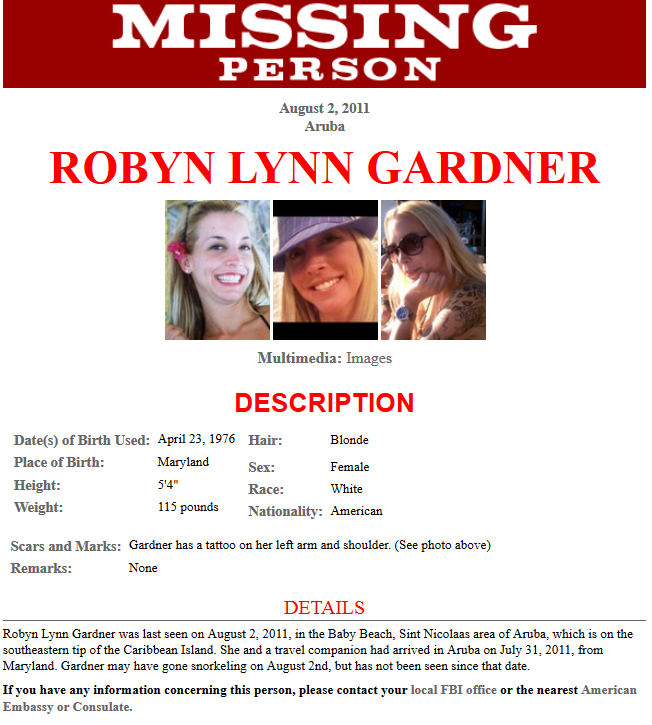 Staff member
In 2014 the suspect wrote a book about this.