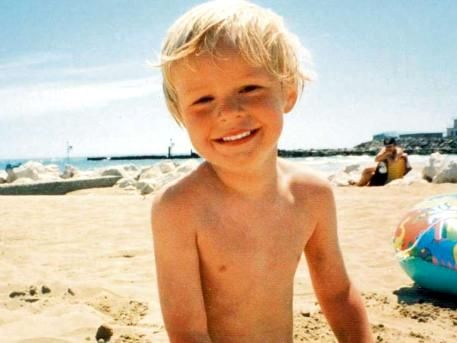 René Hasée was vacationing with his family in the Algarve from Germany on June 19 1996, Rene was last seen in the vicinity of Amoreiras beach, his mother stated they had just finished a meal at a restaurant
and gone down to the beach, Rene's mother stated he was only around 30 metres in front of her when he vanished.

René was vacationing with his family in the Algarve. Rene was last seen in the vicinity of Amoreiras beach, his mother stated they had just finished a meal at a restaurant and gone down to the beach. Rene's mother stated he was only around 30...

www.crimewatchers.net
Last edited by a moderator: Feb 20, 2020
Click to expand...

The whole world spoke about the little British girl. A lot was written, a lot of speculation: kidnapped? Carried off? Or was it even the parents? René's disappearance was only an issue in his hometown Elsdorf (NRW), and there is only one theory that everyone believes:

René's grandparents have been thinking the same thing since her daughter Anita (now 41) and her then boyfriend went on summer vacation with René in 1996 - and came back without him. It was June 21, the beginning of summer, when Anita called. "Mother, the boy is gone," she cried into the receiver.

"She said they were on the beach, René had eaten squid and chips, and wanted to go to the water," says Irmgard Burbach. "He took off his shirt and pants, played in the sand, my daughter could see him all the time. When she went to him and went down the stairs from the restaurant, she briefly lost sight of him. And then suddenly his clothes were all there. "

Franz Burbach immediately got into the car and drove to Portugal. René had always been "his" boy, the boy had spent almost every afternoon with grandma and grandpa. The grandfather hung up hundreds of posters with his daughter. Interviewed witnesses on the beach. Hire divers. Argued with the police, who stopped searching after a few days.

"They said Anita wasn't paying attention, René had drowned," Grandma Irmgard recalls. “But he was terrified of the waves and would never have gone into the sea alone. In addition, his footprints stopped in the middle of the sand. "

The nightmare, at home it got worse.

Grandma Irmgard suffered a nervous breakdown and did not leave the house for two years. Grandpa Franz had five strokes, three heart attacks. The plasterer can hardly speak. And actually he doesn't want anymore.

In May 2007, hope blossomed briefly. "We thought that Maddie's disappearance would finally take us seriously and start looking again," says Irmgard Burbach. But the investigators focused on Maddie, nobody asked about René. The police did not report to the Burbachs once.

The Burbach family has nothing more to celebrate.

Anita still travels to Portugal every summer, following old traces. The rest of the year she tries to endure her life. She has withdrawn, lets her parents speak for her.

They say that their daughter only lives for their second son, whom she had three years after René's disappearance: Guido, now 12. "A dear boy," says the grandmother, "but not our Mupsi." René always got spinach with metal balls from his grandmother. "Guido doesn't have a favorite meal, he doesn't eat with us that often either."

René could do arithmetic before he started school. "Guido has a hard time concentrating." René's picture hangs in every room. “We don't need photos of Guido. We know what he looks like. "

It is not easy for Guido. The Burbachs prefer to continue talking about René.

There are a few memories that make Grandma and Grandpa Burbach smile before they both cry again. One of those:

April 1996, two months before his disappearance. René wore his colorful slippers, came to his grandmother's kitchen, hugged her tightly. "Granny, when you're old," he said, "I'll take care of you. Promised.'"

René Hasée, who was six, disappeared from the Amoreira beach near Aljezur on 19 June 1996. His mother, Anita, a 37-year-old postal worker who was on holiday with her partner Peter and René, told a German newspaper at the time, “We had just eaten something and gone down to the beach.” It was around 6pm and she said Renè was around 30 metres in front of her when “suddenly our son disappeared as if he had been swallowed by the earth. She immediately notified the local police, who, she claimed at the time, were not very interested and did not bother to search for René, telling her he had probably drowned. However, this recollection of events is not shared by a GNR agent who is still working at the Aljezur GNR branch. He told The Resident that he remembers officers spending “day after day searching the beach for the child”.

As with any other missing children cases, the file on René was sent to the Polícia Judiciária, said a GNR spokesman. But the Lisbon headquarters of the criminal police have no record of René Hasée. The missing people’s database in digital format goes back to 1996, said the spokesman. “The name is not registered on the computer database and we have not found it in the paper entries.” However, the spokesman said this does not mean the case is closed. “Sometimes, a case has to wait years until new information is found in connection with it and it is possible this is one of those cases,” said the spokesman.

The disappearance received no publicity in the Algarve and only limited media coverage at home in Germany. But, as the world focuses on Madeleine McCann, we should also spare a thought for one German couple who even now, 17 years on, have not given up hope of finding their son.

René Hasée (6) - The boy who has never been found after 17 years.
miscarriageofjustice.co

Thank you John for these images.

Some more images of the road down to the restaurant and the beach beyond where Rene played.

René Hasée (6) - The boy who has never been found after 17 years.
miscarriageofjustice.co

And views to and from the restaurant. 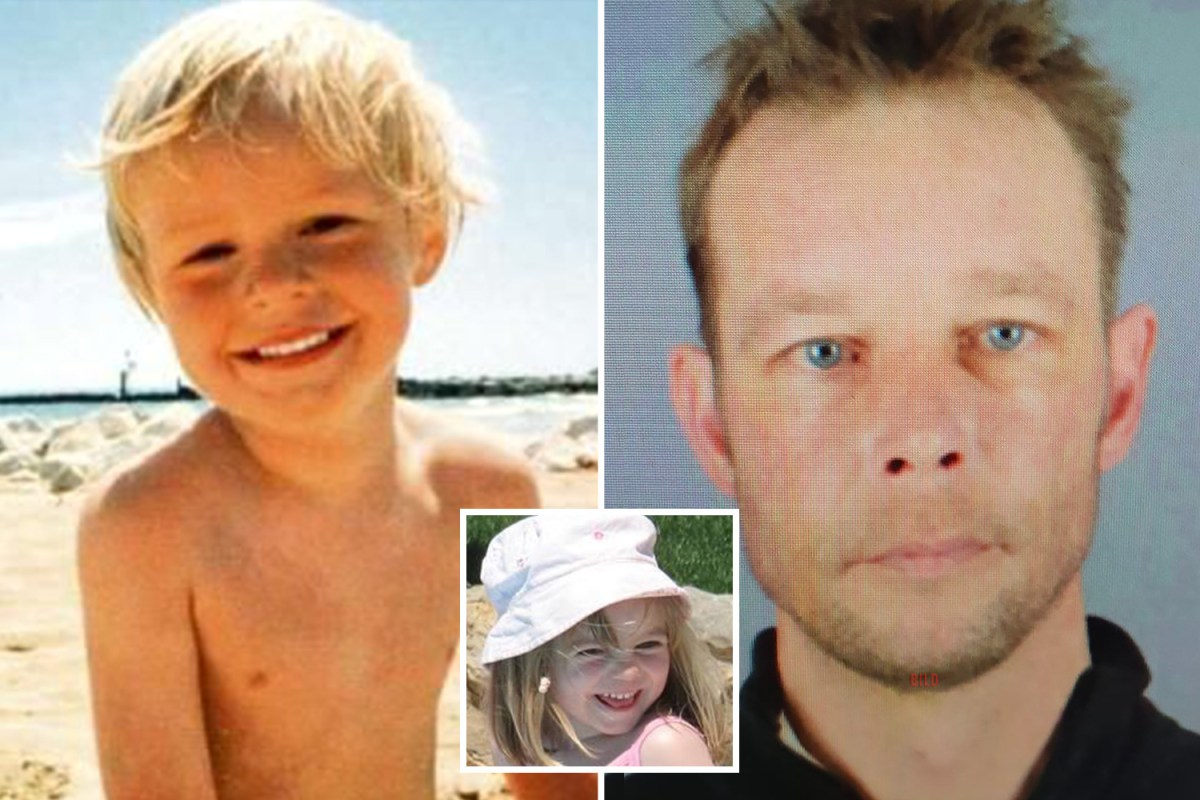 Maddie cops linking chief suspect to disappearance of blonde schoolboy, 6, who vanished from beach in Algarve

MADELEINE McCann cops have linked her suspected snatcher to the disappearance of a blonde schoolboy – 11 years earlier. German detectives investigating Christian B, 43, have contacted the fam…

Madeleine McCann cops link chief suspect to disappearance of schoolboy, 6, who vanished from beach in Algarve

MADELEINE McCann cops have linked her suspected snatcher to the disappearance of a blonde schoolboy - 11 years earlier.

German detectives investigating Christian B, 43, have contacted the family of René Hasee to say they were looking into his 1996 abduction again. It comes after it also emerged that Christian B is being re-investigated over the disappearance of a girl dubbed the 'German Maddie'.

Youngster René, from Elsdorf, Germany, vanished on June 21, 1996 while on holiday with his family in Aljezur - just 25 miles from Praia da Luz, in the Algarve. He ran ahead during a family walk on the beach to go in the sea. After losing sight of him they never saw him again and were left with just his clothes lying on the beach.

Detectives believe the suspect was regularly living in the Algarve from 1995. He was already convicted of sex offences against children and would have been 19 at the time René disappeared.

René’s dad Andreas Hasee said he heard from police for the first time in 20 years when an investigator from the Federal Criminal Police Office (BKA) contacted him today.

The dad admitted: "There could be a connection."

Mr Hasee, who had accepted his son had drowned, added: "René went to Portugal with my ex-wife and her new partner."

"He was actually also a very careful child, he would not have easily climbed into the Atlantic alone."

"Of course you start thinking, yes. I don't imagine that René is still alive," he added.

An expert at the found tide and current conditions in the sea at the time of the disappearance made a swimming accident unlikely.

BKA cops in Germany have maintained other victims could be linked to the Maddie investigation. The force declined to comment on René Hasee.

Christian B was reported to be in the same area as five-year-old German girl Inga Gehricke when she vanished in May 2015. The little girl had been enjoying a family BBQ in woodland in the state of Saxony-Anhalt, around 50 miles from Berlin, when she vanished without a trace in chilling echoes of Madeleine's disappearance.

Police today confirmed they are re-investigating the case for "new clues in connection with a suspect in Braunschweig", Sky News reports.

There are now fears from her family Christian B might be involved in the case after a sick stash of child abuse images were found at his German farmhouse lair near where she vanished. 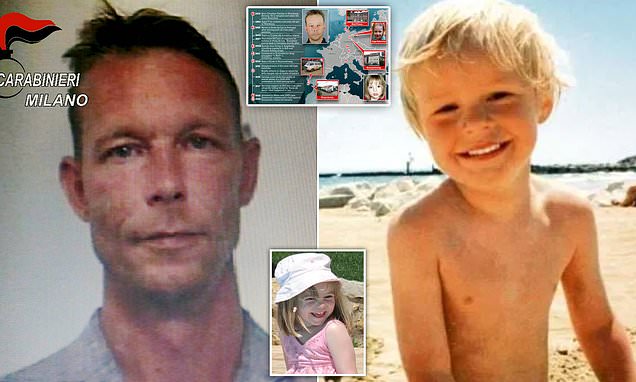 German detectives investigating Christian Brueckner , 43, have contacted the family of René Hasee to say they were looking into his 1996 abduction again.

René was last seen running ahead of his mother and step-father during a walk on the beach to swim in the sea. After losing sight of him never saw him again; left with just his clothes lying on the beach. Pictured, it was just 25 miles from where Brueckner lived in Praia da Luz