On December 25, 1992, Peggy Reaves Mock was last seen at the nightclub the War Horse Lounge in Gadsden, Alabama.

Mock was last seen at a nightclub in Gadsden, Alabama at approximately midnight on December 25, 1992. She went to the Chestnut Station, a local lounge, with friends, then went to the Warehouse Lounge. She left with a man and he brought her back and let her off there. She has never been heard from again.

In March 1993, her boots and her purse were found at the site of the burned-out Mountaintop Club in Rainbow City, Alabama. The purse contained her identification, some prescription medicine bottles in her name, and some undergarments. The purse was near the former club's pool, which was stagnant and full of debris. Authorities drained it, but found no other clues.

In May 1993, Mock's dark blue 1983 Toyota Celica and some personal items were found backed into a space in the parking lot of Forest River Apartments on George Wallace Drive near Gadsden. Authorities stated the car may have been parked at that location for several months, possibly since Mock's disappearance. A photo of it is posted with this case summary. The vehicle had been wiped clean of fingerprints.

After Mock's disappearance, police got a letter a woman had written to a third party about her. The woman wrote that she had "been sick since Peggy Mock came up missing" and that Mock "went to Texas in the trunk of a car."

This woman who wrote the letter was murdered in November 1994, and two men were convicted of the crime. Authorities don't believe her homicide was connected to Mock's disappearance and they aren't sure of the significance of her letter.

Mock resided in Boaz, Alabama in 1992, and that city's police are investigating her case. She may have traveled to the Jacksonville, Florida area after her disappearance. Her case remains unsolved and is being treated as a possible homicide.

Following up on leads in a missing person case is extremely frustrating, especially if the missing is a personal family friend.

Boaz Police Chief Terry Davis knows all too well those feelings of frustration as he has tried to solve the disappearance of 24-year-old Christy Morrison Garrard, missing since Aug. 14, 1998.

Fishermen found a human skull in late February while fishing in Lake Guntersville. Shortly after the find, Davis and his investigators were asked to supply case information on the two thus-unsolved missing persons cases in his jurisdiction in the hopes the skull belongs to one of the missing women.

We've had probably 3,000 leads on Christys case, Davis said. What we are hoping to do is No. 1, find out what happened to her. No. 2, find her. And, maybe most importantly, No. 3, is to give the family a final sense of closure.

Weve checked out leads from all over the state and the region. But weve done that on the other missing person as well.

The second missing person is Peggy Mock, missing since Christmas Day, 1992. The 55-year-old woman was reportedly last seen in Guntersville, but sightings have also been reported in Gadsden.

We got a teletype from Guam the other day, he said. They fingerprinted someone and it was within the range of matches for one of our missing persons cases.

We have to follow up on it. That is our job.

Garrard is the daughter of former Boaz Fire Chief Olan Morrison. Morrison worked closely with Davis through the city and the men and their families are friends. I know they put up a tombstone at the cemetery so they would have somewhere to go, even though they dont have a body to put in there yet, Davis said.

They are friends of mine. What they have been through is amazing. Knowing them makes this case all the more important to us. We havent given up on finding her and we wont give up.

Right now, we dont know who the skull belongs to.

Davis said the skull has been turned over to the Department of Forensic Sciences in Huntsville where scientists will compare it with dental records provided by the Morrison family. Davis said there is no timetable for results to be announced, although he hopes they come sooner rather than later. 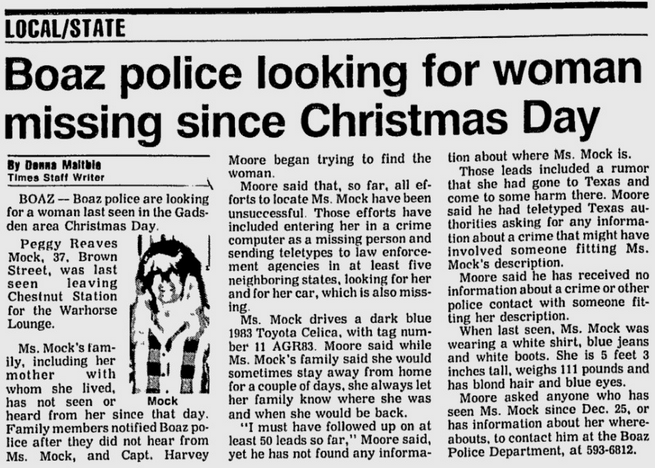 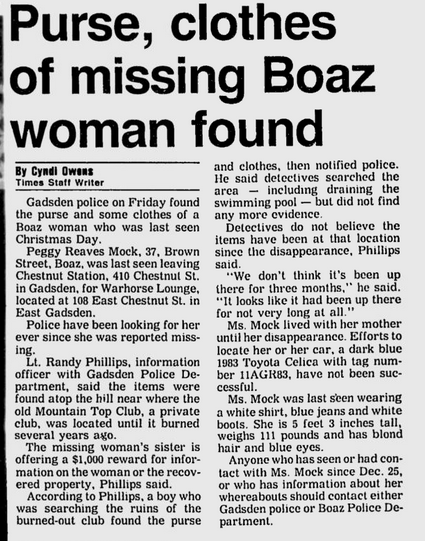 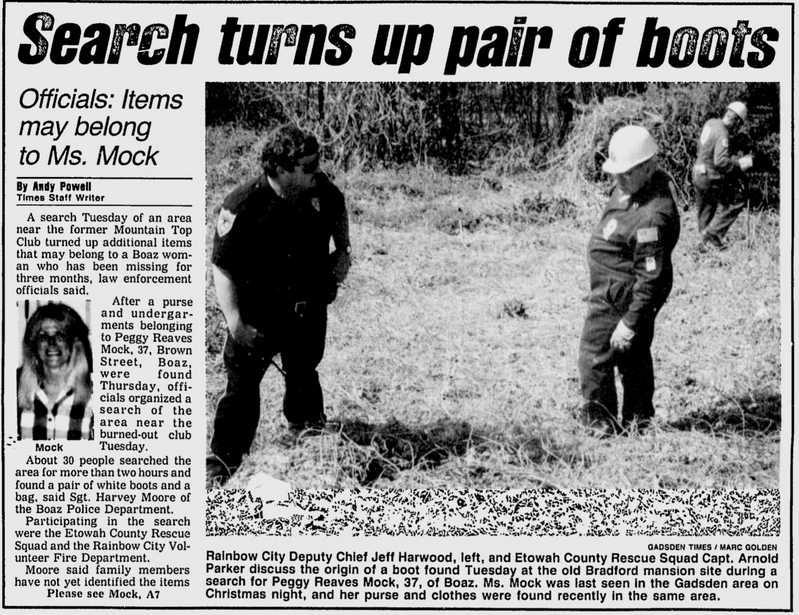 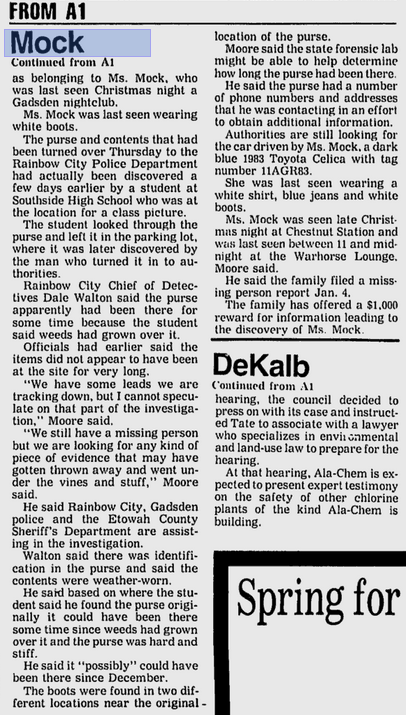 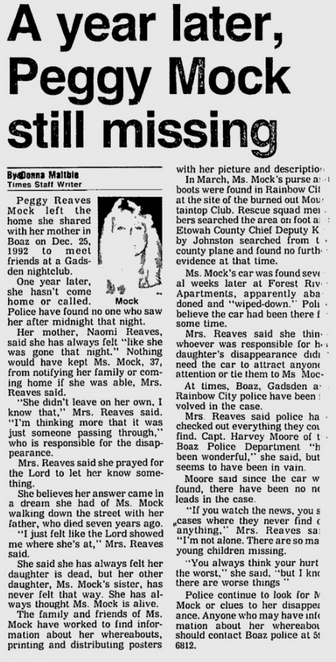 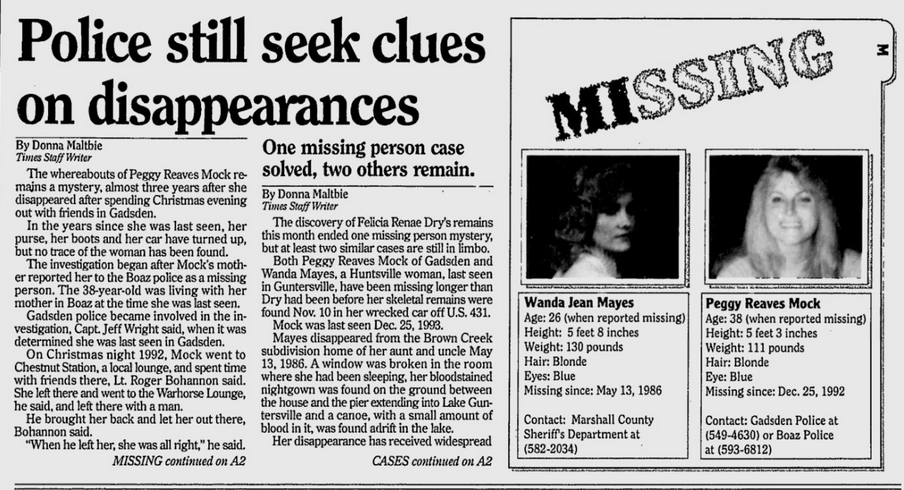 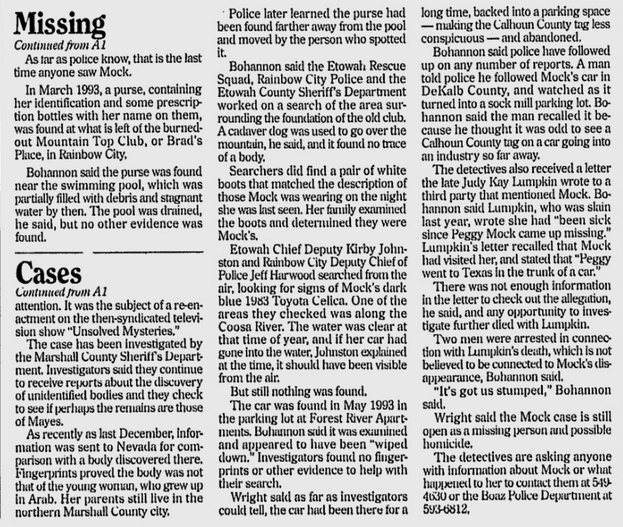 108 East Chestnut St, in Gadsden, AL This is where The Warehouse Lounge stood in 1992.

Mock's dark blue 1983 Toyota Celica was found abandoned at the Forest River Apartments on George Wallace Drive in Gadsden, AL in May 1993, five months after her disappearance. The vehicle had been wiped clean of fingerprints. 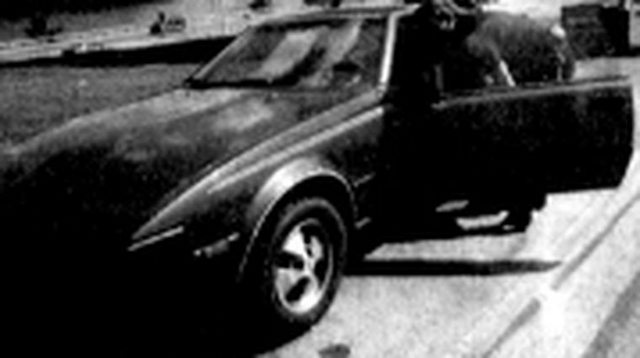 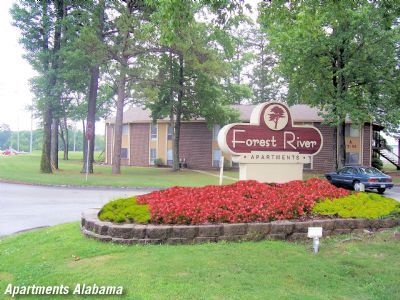 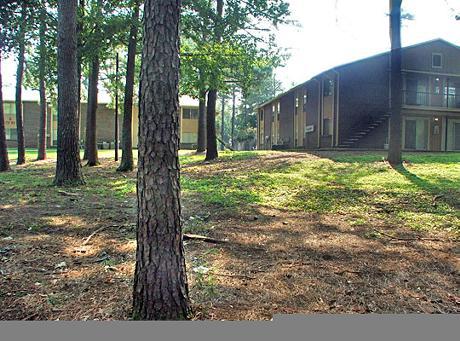