Otto was last seen in Idaho on September 2, 1976. She was reported missing on October 8, 1976. She disappeared after having a fight with her husband who was long suspected of having a hand in her death. He died several years later without being cleared of suspicion or charged with her death. 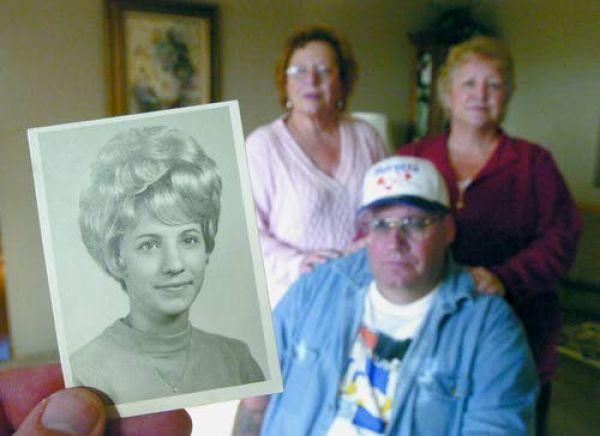 She left behind her rings

It was a warm summer night, Aug. 31, 1976, when Patty Otto disappeared. No trace has been found since, except for her wedding rings, which were discovered in a pocket

She left behind her rings​

No trace has been found since, except for her wedding rings, which were discovered in a pocket of her husband's suit and eventually turned over to his attorney.
They also have since disappeared.

Of all the missing persons cases in the 1970s and '80s, this may be the one that haunts Lewiston's law enforcement community the least because most are convinced her husband killed her.

Ralph Otto, 18 years older than his 24-year-old wife, was the primary suspect, recently retired Lewiston Police Capt. Tom Greene said. "There was no indication anybody else was involved."

Otto was never charged with her death. He died of natural causes while being held in the Clearwater County Jail on an unrelated charge a few years later. But belief in his guilt intensified when he attempted less than a year after Patty's death to hire someone to kill a Lewiston police officer, Duane Ailor, who was pushing hard to find evidence against him.

His conviction on that charge was overturned in 1981 because Idaho didn't have a law on the books saying hiring someone to pull the trigger was the equivalent of attempted murder. That has since changed, but at the time, it meant Otto was a free man until shortly before his death.

"After Ralph died, it's just kind of gone away," Greene said of the case.

That wasn't true for Patty's family, especially her two daughters who were 5 and 3 when their mother disappeared.

And it's not true for one officer, Tom Saleen. Saleen was maybe the first policeman to arrive at the Otto home off of 29th Street at Lewiston's eastern edge to investigate a missing person report filed by Patty's sister. The neighborhood was sparsely populated then. The house stood by itself. Saleen remembers a wet tarp on the ground where it had just been sprayed off. A shovel leaned against a wall. It wasn't enough to get a search warrant, and Saleen doubts that there would have been much to find.

Ralph was intelligent, everyone seems to agree.

His sister, who raised the two little girls, remained almost certain he was innocent, as did the older of the children, Natalie. Suzanne, as an adult going through her own marital problems, said in a past interview that she grew less sure with the years.

According to various accounts, Ralph believed Patty was cheating on him. The night she disappeared, she arrived home late from visiting her parents. She and Ralph argued and he told family and police she stormed out of the house, taking nothing, leaving her daughters in their beds.

The next day he took the girls to one of Patty's sisters, saying he was going to look for her. It was the sister, Alice Mills of Lewiston, who called police.

The family has said good things and bad about the investigation that followed. It was treated for too long as a missing persons case, they believe.

As it progressed, there wasn't enough evidence to get warrants to search the house and other land that Ralph had access to, Saleen said. Only when someone told police years later about a "secret room" in the house were they able to get a warrant. Behind paneling in the basement they found a small area, a few feet square, containing two jet pumps that had been reported stolen from Valley Boat and Motor, but nothing else.

Patty's oldest sibling, Vickie Schaffer of Coeur d'Alene, believes she may know where Patty finally came to rest - someplace near Winchester. She and her husband would drive that way going to Elk City, she said, and she always had bad feelings in a certain place. "So we quit going that way."

The family consulted with psychics, each of whom told them in separate meetings that Patty was dead and they could see water and wet wood. It fit with the Winchester Lake area, Schaffer said.

Part of the problem, Saleen said, was he couldn't find enough gaps in Ralph's alibis for him to have gone far from Lewiston, perhaps not even to the land he had access to near Weippe or Goat Island on the Clearwater River.

Cops say every officer has a case that defines his or her career. This was Saleen's.

A few years ago, he sat with a reporter on the street looking at what had been the Otto home and recited from memory the more than three-decades-old case number, names, dates, facts, suspicions.

He was given Patty's driver's license a couple days after she disappeared, he said, and for eight years, until the day he retired, it set face up in his desk drawer "so that I'd see it every time I opened the drawer, so I'd think about how to solve it."

Even after he left the department, he would call occasionally with suggestions for follow-up.

He wanted to solve the case and find Patty for her parents, Tom and Ardys (Toots) O'Malley and for the two little girls, one of whom died in 2006 with her husband, son and her son's friend when carbon monoxide flooded the boat in which they were sleeping.

The case remains alive to Saleen, and if there was ever to be a break, he would be among the first called, Lewiston Capt. Roger Lanier said.
It's a small, close-knit department in many ways, and people who have left are living archives with the kind of knowledge that is all but impossible to type into reports.

Soon, said Lanier of the group of unsolved and missing persons cases 30 to 40 years old, "there will be no employees here from when these cases started, but there will be employees who have done extensive review. They are familiar with the cases."

On all the missing persons cases, including Patty Otto, the department will get occasional notifications from the National Crime Information Center when remains are found.

They always follow up, hoping someday to find something that will provide closure for family, and also to the officers who have pursued every clue, no matter how old.