Marc's photo is shown age-progressed to 43 years. He was last seen leaving his home is Des Moines, Iowa, on March 29, 1986. He was on his way to a friend's home, but never arrived. The last time he was seen, Marc was wearing a light blue t-shirt, blue jean shorts, white socks, and gray tennis shoes.

Allen was last seen leaving his family's home in Des Moines, Iowa to visit a friend's house up the street, he never arrived. Allen's disappearance came four years after John David Gosch vanished from the same vicinity under similar circumstances...

A teenage boy disappears on his way to a friends house. And, even after all this time, not a clue about what happened to him.

The metro has seen more than its share of cold cases involving children. Johnny Gosch, a 12-year old West Des Moines paperboy who disappeared in 1982. Eugene Martin, a 13-year old paperboy who disappeared from the south side of Des Moines just two years later under very similar circumstances. But there was another similar disappearance just two years after that, a 13-year old boy, that didn't get the same attention from the press or police.

Marc Allen's mother admits her son had been a handful. He had been shifted back and forth between his mother's house and father's house in Minnesota most of his life.

Nancy says, "It was hard because he had been living with dad for a while then came back and lived with me and younger brother and older sister were real close and he wanted to be in there. In tight.

But Marc Allen never seemed to fit in, often getting into trouble. On March 29th 1986, the evening before Easter, the 13-year old left his home on south-west Emma Avenue to hang out with friends, maybe take in a movie. And that's the last time his family ever saw him.

Nancy Allen says she watched her son walk down the sidewalk, past the bushes, and then he was gone. "He waved when he got to the bushes and I waved at him and that was that and I never saw him again."

The next morning, Marc's mother realized her son didn't come home and knew something was wrong. "It was Easter Sunday so I thought maybe he went to grandma's knowing grandma would have an Easter basket there for each of the kids. So I asked my mom but he wasn't there. Had phone numbers for his friends. Called all of them. No one had seen him. He didn't show up where he was supposed to be the night before."

Allen says she called police, but they told her they couldn't do anything for 48-hours. Days turned to months---and no trace of Marc.

Nancy says, "In the months that came, police checked in Minnesota where his dad was. They checked in Connecticut where his paternal grandmother was and there was just...there was nothing."

Allen doesn't know whether her son's disappearance was linked to the disappearances of Johny Gosch and Eugene Martin. But she says police seemed reluctant to help her because of the other missing teens. "I just feel like at this time they were just afraid of..afraid of what would happen with the Eugene Martin and Gosch thing. I got the distinct feeling that they did not want parents to be frightened to let their children sell newspapers or do different things"

Sgt. Jeff Edwards of the Des Moines Police Department disagrees. "I know detectives followed up on leads that did not pan out. They were not able to locate him. He's still listed as a missing person."

Marcs mother says she doesn't know whether her son is alive or dead. But after 25 years, she says, she'd like to know for sure so she, and her son, can find peace. "There are times when the news says they've found a body and they're not sure yet how old it is but they're pretty sure it's male. And in one instant you hold your breath and bite your fingernails and hope that it's not your child. And in other ways you wish they would come out and say that it is your child. So you can finally bury them and go to rest.

If you have any information about Marc Allen's disappearance, please call Des Moines police 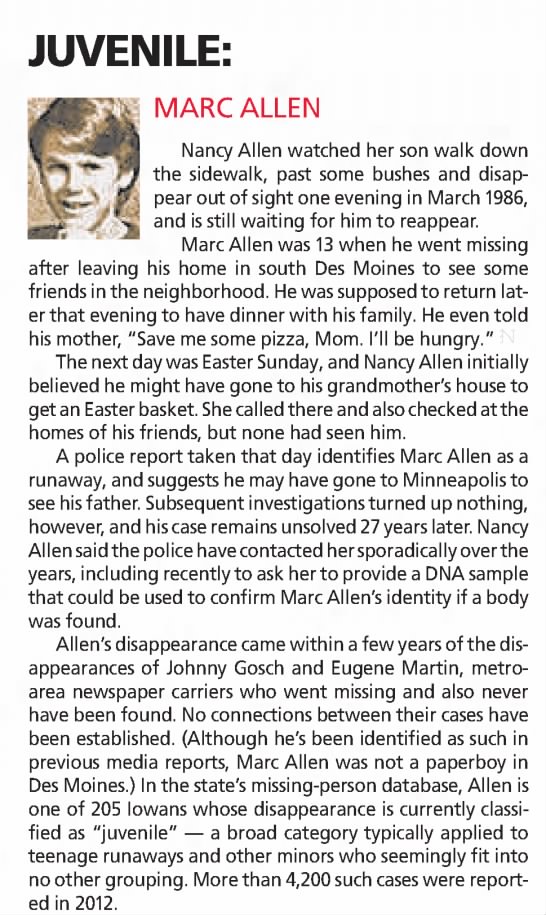 Vital Statistics
Circumstances of Disappearance
Allen was last seen leaving his family's home in Des Moines, Iowa to visit a friend's house up the street, but he never arrived.

Allen's disappearance came four years after John David Gosch vanished from the same vicinity under similar circumstances, and two years after Eugene Wade Martin disappeared. It has not been proved that these three cases are related in any way.

Investigators
If you have any information concerning Allen's whereabouts, please contact:
Des Moines Police Department
515-283-4800
Email
You may remain anonymous if you wish.

Marc Allen was reported missing to the Des Moines Police Department (515-283-4800), in Des Moines on March 30, 1986. He was last seen leaving his home. He was on his way to a friend's home, but never arrived. The last time he was seen, Marc was wearing a light blue t-shirt, blue jean shorts, white socks and gray tennis shoes. Marc's photo is shown age-progressed to 37 years.

Marc James Warren Allen, 13, went missing from Des Moines on March 29, 1986 after telling his mother he planned to walk to a friend's house.

Marc Allen was last seen leaving his home on southwest Emma Avenue in Des Moines, IA on March 29, 1986. He told his mother was going to walk to a friends home in the neighborhood and to save him some pizza for when he gets back. He never made it to his friends house and has never been heard from again. 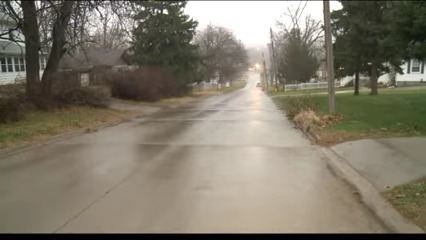 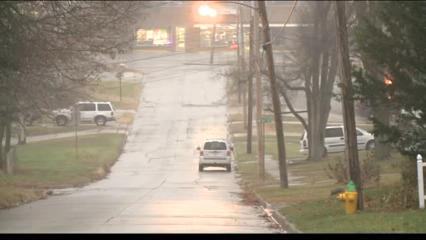