Kelly Dunn's family last heard from her sometime in 1998. The date of her disappearance is given as June 1 as an estimate.

Dunn's family last heard from her sometime in 1998. She lived in Anchorage, Alaska at the time. She never got in touch with her loved ones again.

Missing Since: 01/09/1998
Missing From: Anchorage, Alaska
Classification: Endangered Missing
Sex: Female
Race: White
Date of Birth: 01/04/1969 (51)
Age: 29 years old
Height and Weight: 5'10, 160 pounds
Medical Conditions: Dunn was addicted to heroin and crack cocaine at the time of her disappearance.
Distinguishing Characteristics: Caucasian female. Brown hair, blue eyes. Dunn may dye her hair blonde. She has a surgical scar on her abdomen, a tattoo of a rose on her left ankle and a tattoo of a dagger on her left shoulder. Dunn may use the aliases Nicole Marie Erickson, Catrina Jordon and/or Katrina Jordon. Her ears are pierced.

Details of Disappearance
Dunn's family last heard from her sometime in 1998. She lived in Anchorage, Alaska at the time. She never got in touch with her loved ones again.

Dunn was raised by adoptive parents in Oregon. She became involved with drugs and prostitution in her mid-teens and worked as a prostitute in Portland, Oregon and Seattle, Washington until the 1980s, when she and her pimp relocated to New York City.

Dunn became pregnant, moved back to Oregon, left her daughter with her parents and moved to Alaska for a fresh start. She enrolled in a cosmetology school in Anchorage, but soon returned to prostitution and drugs. She had another daughter and, unable to stay clean, lost custody of her.

In spite of Dunn's lifestyle, she kept in regular touch with her family in Oregon and was trying to regain custody of her younger daughter. The circumstances of her disappearance are unclear and her case remains unsolved. 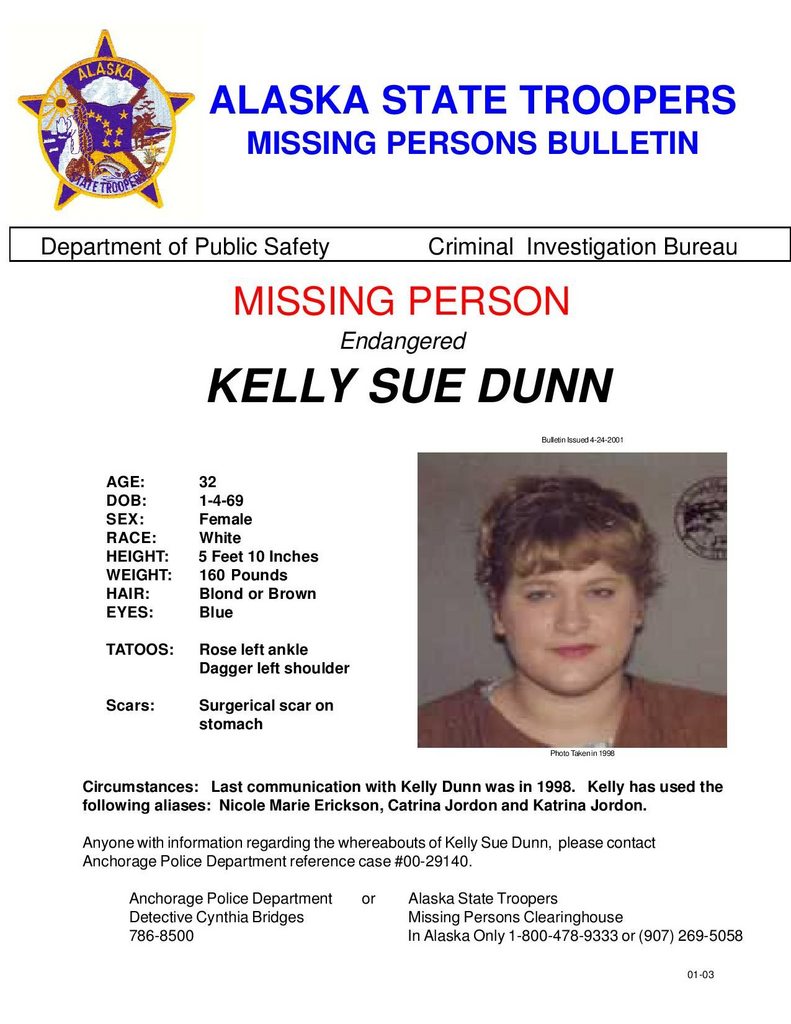 While investigating the homicides of two women whose torsos washed ashore in 2003, Anchorage detectives came across at least five other women who had turned up missing. Cops think they could all be linked by an underworld of sex and drugs.

During their investigation on the Lekanoff/Rothe case, Anchorage detectives told AMW they came across at least five other names of women who had turned up missing in Anchorage. Between 1993 and 2001, Traci Vicent, Jeri Brommels, Kelly Dunn, Robin Van Sickel and Samantha Kent had all vanished without a trace. Cops think they could all be connected by Anchorage's underground world of sex and drugs.
You must log in or register to reply here.
Share:
Facebook Twitter Reddit Tumblr Email Share Link