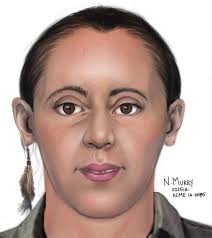 The victim was a passenger in a tractor trailer involved in a collision on I-5 in Cowlitz County, killing both the passenger and driver. The trucker's route was traced using fuel receipts which departed Missouri on May 7, 1991, drove through Kansas, Colorado, Wyoming, Utah, Idaho and Oregon before arriving in Washington on May 14th.

#JaneDoe was a passenger in a tractor trailer involved in a collision on I-5 in Cowlitz County, Washington in 1991. She had no ID on her.

The trucker also died in the crash. The trucker's route was traced using fuel receipts which departed Missouri on May 7, 1991, drove through Kansas, Colorado, Wyoming, Utah, Idaho and Oregon before arriving in Washington on May 14th.

*CLICK THE REPORT BUTTON IF YOU'D LIKE THIS CASE MOVED TO THE GENERAL DISCUSSION AREA TO BE OPENED FOR COMMENTING.
Last edited by a moderator: Jan 10, 2022

Circumstances
Location Found
GPS coordinates
Address 1
Address 2
City
State Washington
Zip code
County Cowlitz
Circumstances
Subject was a passenger in a tractor trailer involved in a collision on I5 in Cowlitz County, killing both the passenger and driver. The trucker's route was traced using fuel receipts which departed Missouri on May 7, 1991, drove through Kansas, Colorado, Wyoming, Utah, Idaho and Oregon before arriving in Washington on May 14th.

The load was dropped off on time and the trucker was heading south to Portland when his truck rear-ended another vehicle after pulling onto Interstate 5 near Kalama. The collision set off a fire that gutted the truck’s cab.
The trucker was known to pick up hitchhikers, but no one knew of anyone riding in his semi that day.

Clothing on body
Black cowboy vest, gray top possibly with pink in it

Case History
The victim, a passenger in a tractor trailer, was killed in a fiery crash on Interstate 5, near Kalama on May 14, 1991. The driver, also killed, was identified. She may have been a hitchhiker and was believed to have been picked up between Missouri and Washington.

She was buried as Jane Doe in Longview. Her body was exhumed in January 2014 in order to obtain a DNA sample and to create a reconstruction of what she may have looked like.

Investigating Agency(s)
If you have any information about this case please contact; 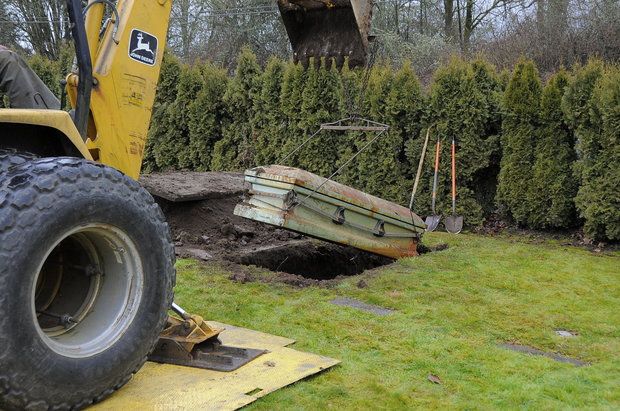 For more than two decades, the remains of the Jane Doe were buried in a Cowlitz County cemetery.

Now Washington investigators are hoping the latest developments in forensic technology will help put a name on the small-statured, brown-skinned woman who was killed along with Lester Harvel, both of them found in his burning tractor trailer in May 1991.

“DNA technology has come a long way since this tragic collision,” said Detective Sergeant Stacy Moate of the Washington State Patrol. “We hope to be able to finally identify her and return her to the care of her family.”

Last week, the woman’s remains were exhumed from an unmarked grave in the Longview Memorial Park and Cemetery, the first step in a monthslong journey. They were sent to Seattle, where King County forensic pathologist Dr. Kathy Taylor will clean and re-examine the remains for clues.

View full sizeA Washington State Patrol file photo from the May 14, 1991, crash scene shows the damage caused by a fire that burned Lester Harvel's truck along Interstate 5 near Kalama, killing the trucker and his unidentified passenger.Washington State Patrol
When that's completed, the remains will go to the University of Northern Texas for DNA extraction and entry into national DNA databases in the hopes of finding a match or a relative, Moate said. There, facial reconstruction on the skull will begin. Using depth markers and clay, experts will try to give investigators an idea of what the victim looked like.

Finally, the remains will return to the Cowlitz County Coroner’s Office, to be held in anticipation of reuniting the victim with her family.

It’s an ending WSP Det. Greg Wilcoxson has pursued for more than 13 years. The case was 10 years old when it fell to him it. For a decade, Wilcoxson used traditional policing methods to try to uncover the woman’s identity, checking her dental records against missing persons reports and comparing cold cases from throughout the nation.

She is the oldest unidentified person case on the investigators' books.

He even traced the trucker’s route to Washington, using fuel receipts. Harvel, who departed Missouri on May 7, 1991, drove through Kansas, Colorado, Wyoming, Utah, Idaho and Oregon before arriving in Washington on May 14.

He dropped his load off on time and was heading south to Portland when his truck rear-ended another vehicle after pulling onto Interstate 5 near Kalama. The collision set off a fire that gutted the truck’s cab.

Harvel liked to pick up hitchhikers. But no one knew anyone rode in his semi that day until rescue crews found the unidentified female passenger’s remains. She was not an authorized passenger, Moate said, and the flames destroyed any identification she may have been carrying.

The young woman was slight, standing a little over 5-feet tall. She had high cheek bones, a dark complexion and appeared to be in her early 20s.

And the coroner determined she had been treated for scoliosis, a spinal disease.

“He could have picked her up from anywhere along his route,” Moate said.

After the facial reconstruction is complete, investigators plan to share the woman’s photograph far and wide.

“We were determined to identify this young lady and do everything we could to get her home,” she said. “We are hoping this is the final step toward that goal.”

A new facial reconstruction of the body burned in a fiery 1991 truck crash near Kalama gives authorities some idea of what the woman likely looked like. They hope sharing the picture might help solve a nearly 23-year-old mystery and allow them to return the woman’s remains to her family.

“I want to make sure she gets back to her family,” said Cowlitz County Coroner Tim Davidson. “So they can have some closure after wondering what’s happened to her for all these years.”

The woman was traveling with trucker Lester Dean Harvel of Illinois when both of them died in the May 14, 1991, crash on Interstate 5 near Kalama. She wasn’t supposed to be in his truck, and authorities believe Harvel picked up a hitchhiker somewhere between Missouri and here. He stopped in Tacoma and was headed to Portland when the crash happened.

The woman’s body was burned in the fire that followed the crash, hampering the identification. All officials knew in 1991 was that she was between 5-foot 1-inch and 5-foot 4-inches tall and had been treated for scoliosis. Her age was estimated as early 20s and officials thought she might be Native American. Unable to identify her, the woman was buried as a Jane Doe in Longview.

The case has nagged at officials for more than two decades.

It is the last remaining unidentified remains case for the county coroner’s office, and it is the oldest such case for Washington State Patrol’s cold case unit.

In January, both agencies worked to exhume the body, hoping advances in technology could finally lead them to an identity. DNA has been sent to a laboratory and will be matched to a missing persons database when complete. And in Seattle, state forensic anthropologist Dr. Kathy Taylor reconstructed the woman’s skull and then gave the information to forensic artist Natalie Murry, who created the drawing.

After so many years of wondering, there’s “now someone staring back at us,” Coroner Tim Davidson said of the drawing. “It helps people relate more.”

Davidson said the drawing makes him suspect all the more that the woman is Native American. All such drawings are approximations, but Davidson said the same artist did a previous drawing for the county, and it was spot-on once they’d ID’d the man. Skeletal characteristics can help forensic anthropologists tentatively identify ethnicity. Witnesses who saw the woman in the truck just before the crash also described long, dark hair and a feather earring, which are depicted in the drawing.

Because of the possibility the woman was Native American, officials asked the Puyallup tribe to give a blessing before January’s exhumation.

The woman also had bad teeth and a slight gap in her front bottom teeth, which may help with the identification.

Davidson said even with the drawing and the DNA, when it becomes available, establishing an identity may take some time. It’s hard to know when someone might see the image and it might spark a memory. Two bodies found in Cowlitz County in 1987 were finally identified in 2007 after a relative in another country saw a posting on the Internet, he noted.

“We’re going to keep working on it,” Davidson said. “It might not happen today, but we’ll have everything on file and we’re going to just keep our fingers crossed.”

Barbara LaBoe covers courts and law enforcement for The Daily News. Reach her at 360-577-2539 or blaboe@tdn.com. 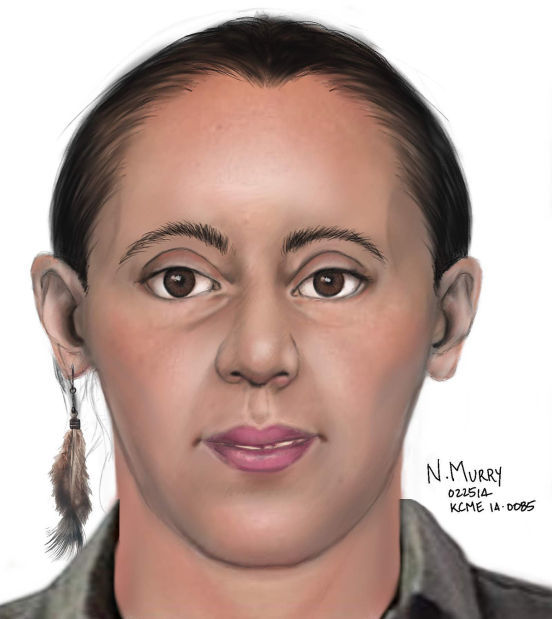 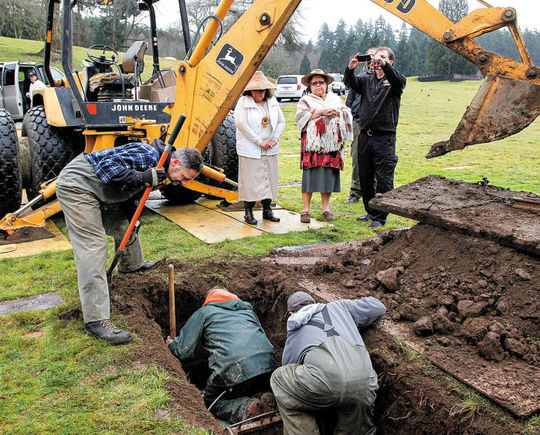 Washington State Patrol file photo from the May 14, 1991, crash scene shows the damage caused by a fire that burned Lester Harvel's truck along Interstate 5 near Kalama, killing the trucker and his unidentified passenger. 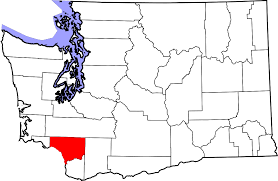 The victim, a passenger in a tractor trailer, was killed in a fiery crash on Interstate 5, near Kalama on May 14, 1991. 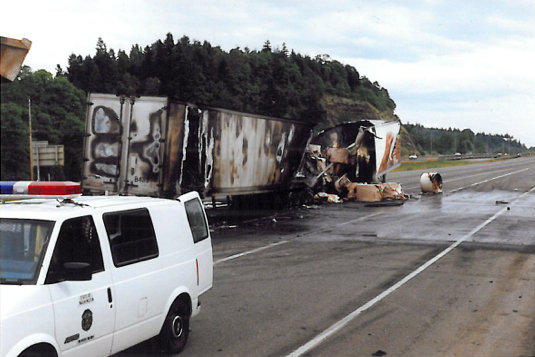