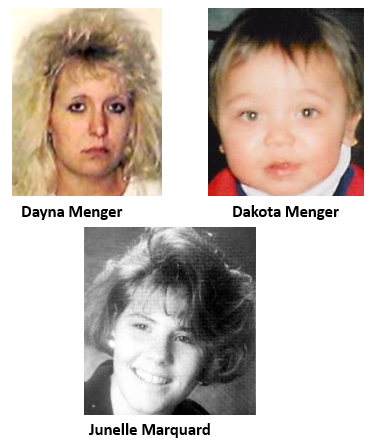 Dayna Menger was last seen with Junelle Marquard in Nekoosa, WI when they dropped Dayna's four-year-old daughter off at a friends house, the women left accompanied by Dayna's two-year-old son Dakota Menger. The trio has never been heard from again.


*Click the Report button on a case if you'd like it to be moved to the general discussion area to be opened for commenting.*

Junelle disappeared with a friend,Dayna Menger, and Dayna's two-year-old son, Dakota. They were last seen in Nekoosa, Wisconsin , when they dropped Dayna's four-year-old daughter off at the babysitter's home.The women left with Dakota, without... 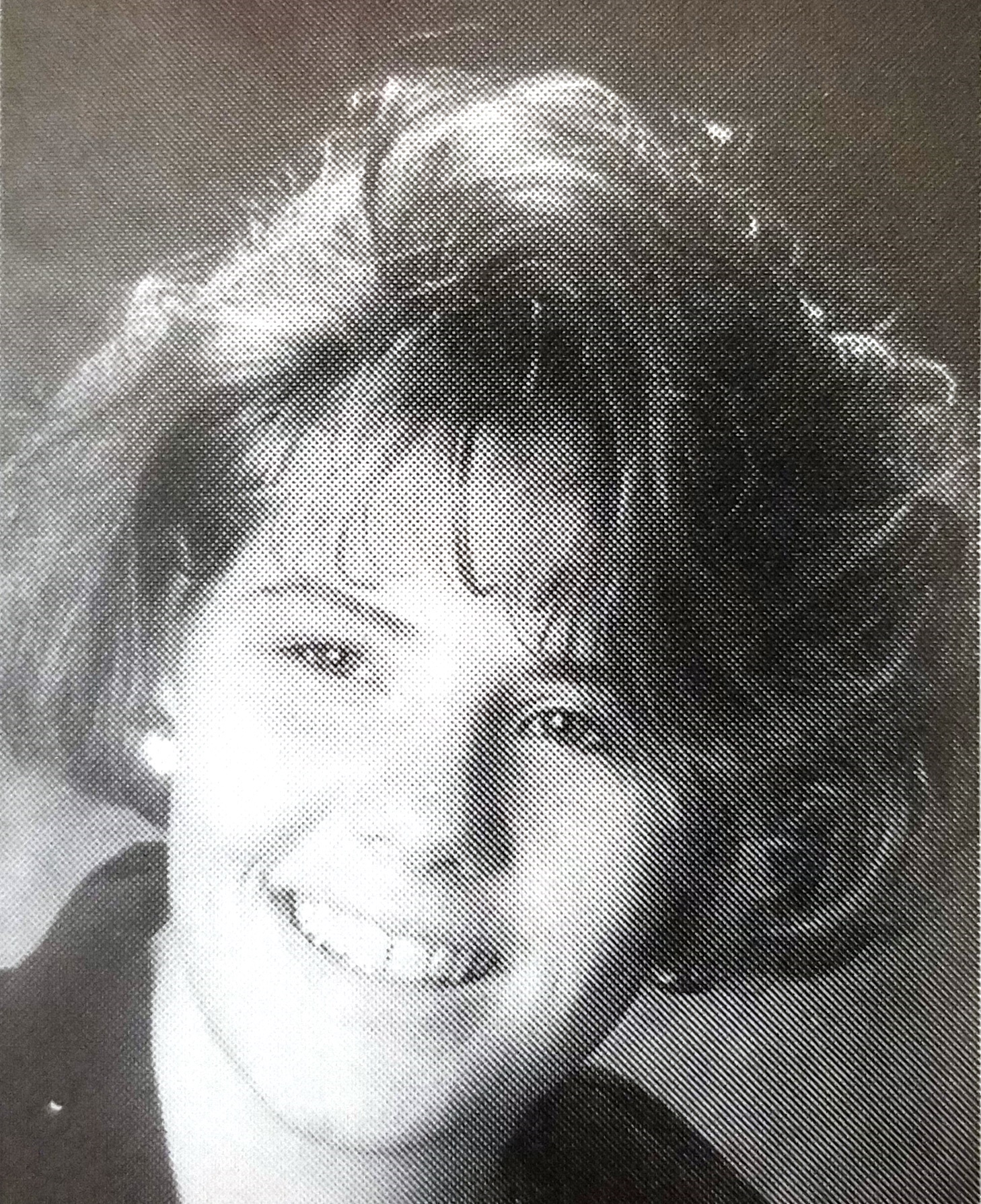 Two women and a toddler went missing from Nekoosa in 1999. Police have almost no clue what happened to them.

Dayna Menger, her 2-year-old son Dakota and her friend Junelle Marquard haven't been seen since Aug. 24, 1999, according to police.
www.wisconsinrapidstribune.com

Two women and a toddler went missing from Nekoosa in 1999. Police have almost no clue what happened to them.
Karen Madden
Wisconsin Rapids Daily Tribune

WISCONSIN RAPIDS - Five-year-old Dayna Menger and her little brother were happy as they took their doll and buggy for a walk down Peach Street.

The moment was captured in a photo, with the children’s wide smiles and winter gear, on Page 3 of the March 16, 1978, edition of the Daily Tribune. It didn’t seem to matter that the snow in the picture didn’t match the springlike stroll they enjoyed.

In the years that followed, the newspaper would document Menger carrying a wooden rifle when she was part of the Cranboree Cadet Flag, Rifle and Drum Corps in 1978 and 1979. It would show her at age 7, participating in an ice cream eating contest during Dairy Month in June 1980, and later helping make wooden toys for disadvantaged children in a woodworking class at West Junior High on Dec. 2, 1987, and then making the honor roll the last quarter before graduating from Lincoln High School in 1991.

Junelle Lee Marquard was six years younger than Menger but soon began appearing in the newspaper just as often. A picture of her in the March 10, 1986, edition of the Daily Tribune shows the Mead Elementary first grader watching a demonstration on carding fleece. She became a regular on the sports pages at age 9, when she joined a bowling league and participated in youth soccer, and the Daily Tribune later listed her among the 1997 graduates of Lincoln High School.

In December 1995, when Marquard told a Daily Tribune reporter people should “wear a jacket and dress warm” as the best way to fight cold temperatures outside, Menger was listed as a member of the newspaper staff in a Christmas greeting to readers.

It's remarkable, considering what would happen later, how well-documented their whereabouts had become.

The Daily Tribune would go on to report the birth of Menger's son, Dakota, on Aug. 8, 1997, and the deaths of both young women's mothers. Menger's mom died in October 1990 in Duluth, Minnesota, and Marquard's in November 2001.

Troubles with the law began in 1996 for Menger and in 1998 for Marquard, and those showed up in the paper, too. Menger was convicted of forgery, misdemeanor battery and drug possession. Marquard was convicted of disorderly conduct, intimidating a witness and battery.

At some point they became friends. Then, suddenly, they were gone, along with Menger's son, 2-year-old Dakota.

They were together on Aug. 24, 1999, in Nekoosa, and that's the last known time either woman or the child was seen.

They dropped off Menger's 4-year-old daughter at a friend's home and left with Dakota, Nekoosa Police Chief Shawn Woods said. The two women didn’t say where they were going or what they were going to do.

At first, their failure to return for the girl didn't cause alarm

It was common for Menger to leave her daughter at the woman’s house for days, Nekoosa Detective Brian Machon said. The friend thought of herself as the girl’s second mother.

But days turned into weeks, and that was not common. The woman would contact Wood County Social Services, and the agency would take custody of the girl.

As far as Woods and Machon know, no one has heard from Menger, Marquard or Dakota since that day. No one even reported them missing for five years, and 20 years after they vanished, police have no idea what happened to them.

Menger was 27 and lived in Nekoosa with her daughter and Dakota at the time of their disappearance. Marquard was 21 and lived in Wisconsin Rapids.

Menger's name showed up again in the Daily Tribune in 2000, when the Wood County Juvenile Court published public notices to alert her that someone had petitioned to terminate her parental rights for her daughter. The notices didn't mention Dakota.

Marquard was listed as one of her mother's survivors in the 2001 obituary, which said she lived in Wisconsin Rapids. But she'd been out of sight and out of contact for two years by then.

Police didn't know the women were missing until March 4, 2004, when Menger’s younger brother, Bryant — the one smiling in the photo with the doll carriage 26 years earlier — reported Dayna missing. He didn’t think it was right that no one was looking for his older sister, Woods said. To this day, no one has officially reported Marquard missing.

Like Dayna Menger, Junelle Marquard had become estranged from her family because of drug problems, according to police.

Bryant Menger died in September 2013, without knowing what happened to his sister.

The circumstances surrounding their disappearance remain a mystery to Woods, who wants to draw public attention to this bizarre missing persons case in hopes of finally getting answers — especially for Menger's daughter, who was adopted and is now living in another state.

Machon thinks the women used Marquard's vehicle when they dropped off the girl, but he doesn't know anything about its year, make, model or even its color.

"We are looking into (Department of Transportation) archives but do not have that information at this time," Machon said during an interview this month with a Daily Tribune reporter.

Police do have physical descriptions of the three:

► Marquard was tall, Wisconsin Rapids Police Lt.-Detective Julie Buerger said. She was 6 feet, 1 inch and weighed 152 pounds. She had short brown hair and hazel eyes at the time of her disappearance, although people can change their appearance, Buerger said.

► Menger was 5 feet, 8 inches tall and weighed 150 pounds. She had strawberry blond hair and blue eyes. She had cross tattoos on her left shoulder and right index finger.

► Dakota had brown hair and hazel eyes. He would now be 22 years old.

But beyond their physical appearance and basic background information, authorities have little to go on. If the two women planned to go somewhere specific, they didn't say. If they were meeting someone else or trying to get away from someone, they didn't tell any of the people investigators interviewed.

Woods and investigators are left to speculate about what happened to them, and Woods suspects the missing women may have been victims of foul play.

Menger had legal problems but nothing that would make her want to disappear, Machon said. Although she had left town prior to her disappearance, family and friends said she never would have abandoned her daughter, Machon said.

Marquard has not been reported missing, Buerger said.

"It's been difficult," Buerger said. "We're not aware of many of June's close contacts who may be in or around the area or that may still be living."

Woods, who became Nekoosa police chief in 2012, kept trying to learn what happened to Dayna Menger, even after her brother died. When Woods promoted Machon to the newly created position of detective in 2016, Woods told Machon one of his priorities was to find out what happened to the 27-year-old woman and her 2-year-old son.

Before her disappearance, Menger had lived in Milwaukee for some time, and Machon has reached out to police there to see if they knew anything. Police think the two women might have been heading to Milwaukee after they dropped off the little girl.

Woods and Machon have collected DNA samples from relatives. Using DNA, fingerprints and other methods, the chief and detective are fairly certain Menger did not change her identity to start over somewhere else.

Buerger said she also wants to find answers. The people she's talked to say there was no reason for the two women to disappear and there are reasons Marquard would contact people in the Nekoosa and Wisconsin Rapids areas, but that hasn't happened.

The Daily Tribune has been unable to locate anyone who knew either of the women.

Buerger said detectives would like to talk to anyone who knew Marquard before she disappeared or who knows what happened to her. People may contact the Wisconsin Rapids Police Department at 715-423-4444.

Anyone who has information on Menger or Dakota may contact Machon at the Nekoosa Police Department at 715-886-7897.

People who want to remain anonymous also may contact Wood County Crime Stoppers online at www.woodcountycrimestoppers.com, by phone at 1-877-325-7867 or on the P3 mobile app, which can be downloaded free onto a smartphone or used online at p3tips.com/index.htm. People may remain anonymous on any of the tip options and still receive a reward up to $1,000.

Buerger, Machon and Woods all said they hope someone will step forward and help find answers about the disappearances of the two women and boy.

Details of Disappearance
Junelle disappeared with a friend, Dayna Menger, and Dayna's two-year-old son, Dakota. They were last seen in Nekoosa, Wisconsin on August 20, 1999, when they dropped Dayna's four-year-old daughter off at the babysitter's home. The women left with Dakota, without saying where they were going or what they planned to do.

When Dayna didn't return to pick up her daughter as scheduled, the babysitter wasn't initially concerned; it wasn't uncommon for Dayna to leave the child at the babysitter's house for days at a time. But after weeks passed without any contact from either of the women, the babysitter contacted social services, which took custody of the girl.

At the time of their disappearances, Dayna lived with her daughter and Dakota in Nekoosa, and Marquard lived in Wisconsin Rapids, Wisconsin. Both women were involved with drugs, and had become estranged from their families as a result. Dayna eventually lost her parental rights to her daughter and the girl was adopted and now lives out of state.

It wasn't until 2004 that the police were officially informed of the three disappearances; Dayna's brother reported her missing at that time. Marquard has never been officially reported missing; police are only looking for her because of Dayna and Dakota's disappearances.

Both women have minor criminal histories, but investigators don't believe they're running from the law, and foul play is a possibility in their disappearances. The three cases remain unsolved. 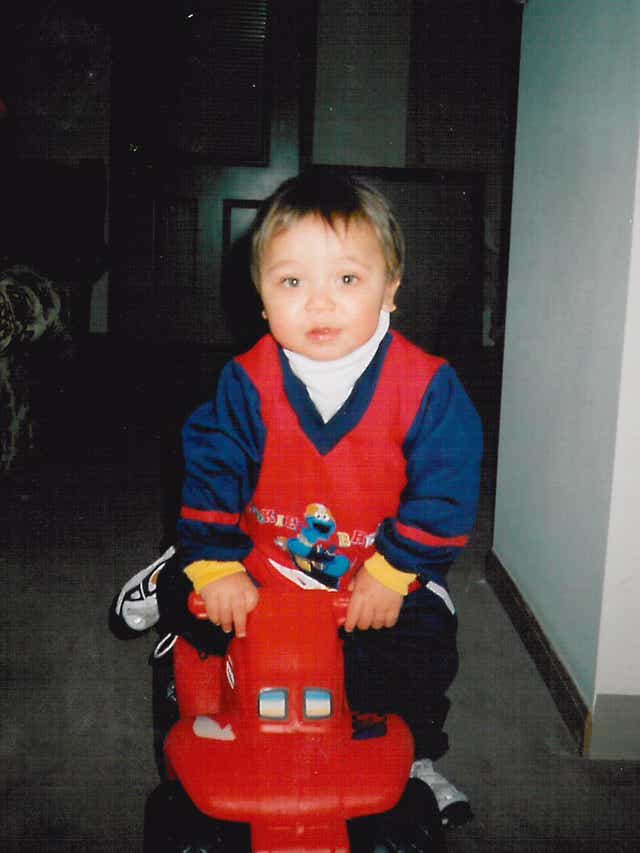 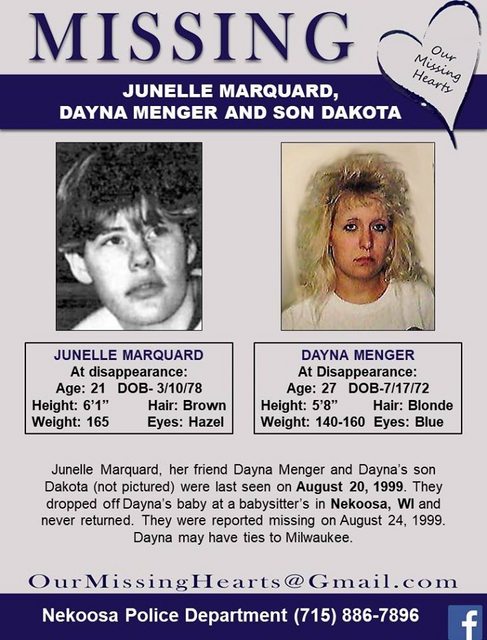 Dakota's photo is shown age-progressed to 21 years. He was last seen with his mother, Dayna Menger, on August 20, 1999.

Junelle Marquard, Danya Menger and Dayna's two-year-old son Dakota were last seen dropping off Dayna's four-year-old daughter off at a friends house in Nekoosa, WI on August 20. 1999. Police were notified four days later when Dayna never returned to her friends house to pick up her daughter, police checked Dayna's residence finding nothing out of the ordinary. The women left without saying where they were headed and authorities do not know any details regarding the vehicle the trio left in. Police believe they may have been to Milwaukee after dropping off Dayna's daughter. 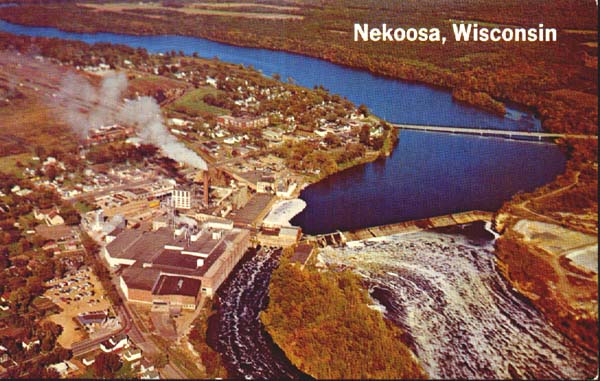 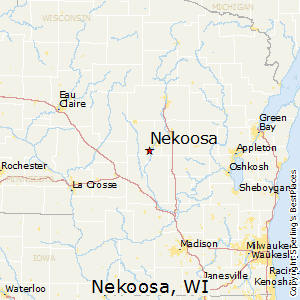