Joan, circa 1983; Age-progression to age 52 (circa 2018)
Details of Disappearance
Joan was last seen walking down Main Street in Warrenton, Oregon between 2:00 and 2:30 p.m. on September 30, 1983. She had left a local store and was on her way to Warrenton Grade School. She never arrived there has never been heard from again.

Joan was a senior at Warrenton High School in 1983, and was considering a career in law enforcement after graduation. Just before her disappearance, she was elected the first female president of the Clatsop County Sheriff's Department Explorer Post.

She is the youngest of six children and is described as a reliable teenager who didn't smoke or drink alcohol. Her family stated she wasn't having any problems and would not have run away from home.

Joan is missing under suspicious circumstances and her loved ones believe she was murdered. Both her parents died within a month of each other in 1994, but her siblings are still searching for her.

My name is Jason Futch, and I am a civilian cold case researcher. I look into cold cases specifically in the Suwannee Valley Region of Florida and attempt to locate new information that could be helpful to the general public. I am also the creator of Suwannee Valley Unsolved: A True Crime Podcast. SVU is a different format podcast compared to my previous podcast, From The Vault.

If you have any questions regarding what I do or need help locating information, please do not hesitate to ask.

One of my friends, Dena Rush, has been operating a page on Facebook dedicated to Joanie Hall's disappearance. You can check it out here: https://www.facebook.com/JoanieHallMissing/

Joanie's case is discussed at the 4:15 min mark.

A classmate, Mike Moore told authorities he Joanie a lift to the Warrenton mini-mart on the day of her disappearance. Joanie left the mini mart sometime between 2:00 and 2:00 pm where she was going to walk the half-mile to Warrenton Grade School where she helped her aunt tutor kids. Joanie never made it.

Very important information pertaining to Joanie's disappearance is discussed in this news report. Questions remain into what happened after 17-year-old Joanie Hall left Warrenton High School on the afternoon of Sept. 30, 1983.

WARRENTON, Ore. - A woman, who asked KATU News for help to find her sister lost and presumed murdered 26 years ago on the Oregon Coast, died two weeks ago, leaving her fight to find out what happened to Joanie Hall to others.

“It’s such a long time, and I would really just like her to come home,” Charlotte Hall said in an interview with KATU News in January. “I would just like to put her to peace is what I would like. That’s my ultimate goal.”

Joanie Hall was a 17-year-old senior at Warrenton High School who left school on Sept. 30, 1983 to walk to Warrenton Grade School a quarter mile away. A boy named Mike Moore told police he picked up Joanie somewhere between the two schools at about 2 p.m. and gave her a ride to a convenience store. And then she just vanished.

“Somebody knows something,” said Charlotte in January. “There’s a dirty little secret in that town that somebody knows, and I’m sure there’s more than one person that knows that.”

According to an initial police report that KATU News uncovered a year ago, three boys said they saw Joanie Hall in a Warrenton driveway the day she disappeared. They said she was in Mike Moore’s car at about 4 p.m. But later all three changed their stories and said it wasn’t Joanie Hall. It was someone else, a girl named Treesa Woods.

Maggie Perry, Joanie’s best friend at the time, showed a KATU News reporter a picture of Joanie and Treesa. She said Treesa looked nothing like Joanie. Perry said she never knew someone reported seeing Joanie after 2 p.m. the day of her disappearance until she saw KATU’s report last year.

“Someone is really holding back,” Perry said. “There’s a group of kids that know what happened that night, and I wish they would come forward and deal with what they did.”

Treesa Woods was murdered 15 years ago in Minnesota in an unrelated case, but her best friend and brother said she was never with Mike Moore the day Joanie Hall disappeared.

KATU News started with Basch because his father was the Clatsop County Deputy who took the second report from the boy’s when they changed their stories.

Basch moved to California just days after Joanie disappeared and still lives there today. By phone he said he thought it was Joanie in the car that day but Leer or Sears told him later that it “must have been Treesa Woods.” He asked the reporter how he could get a hold of Jimmy Sears.

Sears has a MySpace page and is on Facebook. After several back and forth e-mail messages Sears said by phone: “I can’t remember anything about that day. It was just too long ago.”

According to that first police report, Sears told Police Moore told him: “He had to drop Joan off.”

What about Gary Leer?

Leer and his wife now own a bagel shop in Seaside. At the shop Leer’s wife said her husband knows nothing about it. She took a reporter’s business card and said her husband would call him. He never did.

The reporter then went to the home of Mike Moore, near Astoria. Moore’s wife said her husband wasn’t home and then told the reporter to leave.

Follow-up phone calls were not answered but later a Clatsop County deputy called the reporter and told him the Moores wanted to file a telephonic harassment complaint against him for phoning their house.

Current Clatsop County District Attorney Josh Marquis said he is still bothered by the fact that a father of one of the witnesses handled the investigation and didn’t make obvious follow-up calls to verify the stories of his own son and his son’s friends.

“You never should have police officers who are related to witnesses or people of interest engaging in interviews,” Marquis said. “The questions that were not asked: The case is pregnant with those.”

Maggie Perry said she hopes someone will finally come forward so the rest of the Hall family can lay Joanie to rest.

It was the same thing that Charlotte Hall said she wanted.

“I would say anonymously just tell us where she is at. Just let us go get her and bring her home,” Charlotte said.

Marquis said, “All I can do is try to ensure people that if you come forward we will grant you as much anonymity as we can.”

Charlotte will be buried on Tuesday next to her parents who died shortly after Joanie disappeared.

Meanwhile, another witness has been found who said she saw Joanie get into a car at the Warrenton minimart. But like Sears, Leer, and Basch, she changed her story when she was interviewed by Deputy Gerald Basch.

Tammy Crites said by phone from Medford that Basch bullied her into changing her story.

Basch, who now lives in Washington, did not return calls for comment.
Last edited: Aug 6, 2020 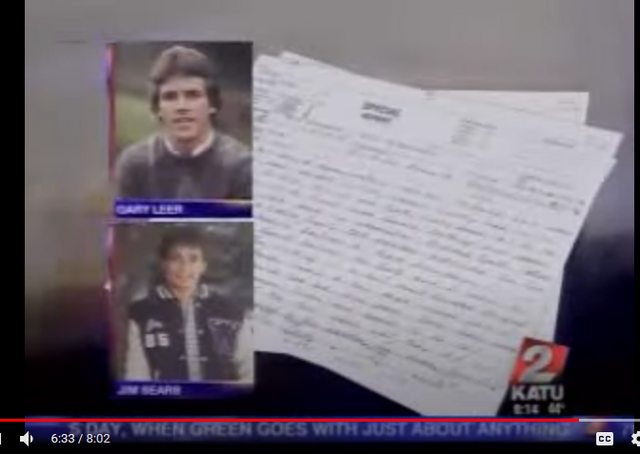 The 2010 KATU investigative report into Joanie's disappearance dug up police records on the case which reported the following information.

According to Police reports three boys, Mike Basch, Gary Leer, and Jim Sears claimed that before 4:00 pm and 4:30 on that day of Joanie's disappearance, Mike Moore pulled up in his vehicle at Jim Sears house with a young female in the vehicle who he identified as Joan Hall. However, in another report, all three teens changed their statements. They said it was somebody else in the car, not Joan Hall. The reporting deputy for this report was Deputy Gerald Basch. Mike Basch's father. Basch moved to California just days after Joanie disappeared where he still lives.

During the KATU investigative report, there was also mention of another witness who stated she saw Joanie getting into a vehicle outside the Warrenton mini-mart that day, she said she remembered Joanie looking confused and scared. However, you guessed it, she too ended up changing her statements. When asked why she stated that Deputy Gerald Basch bullied her into doing so.
Last edited: Aug 6, 2020 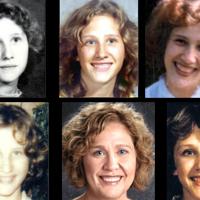 In One Ear: Somebody knows

In One Ear: Somebody knows​

The teen was supposed to assist tutoring children at 2 p.m. that day at Warrenton Grade School, but never showed up — which was puzzling, since Joanie was a reliable girl.

Local law enforcement interviewed family, friends and Joanie's fellow students to find out if anyone had seen her. One young man, Mike, said he'd dropped Joanie off at the Mini-Mart around 2 p.m., and she was going to walk to the grade school. Yet a girl at the Mini-Mart said she saw Joanie get into a car with a young man and leave. The girl later changed her story, saying it wasn't Joanie, after all.

Three of Mike's friends claimed they saw Joanie with him and his car around 4 p.m. the afternoon she vanished. All three of them later changed their stories, saying it was not Joanie they'd seen. Scratching your head? No wonder.

Not surprisingly, foul play is suspected, but no one was ever arrested, and despite extensive searching, she has never been found. If you have any information, or know where her remains are, please contact the Clatsop County Sheriff's Office at 503-325-8635 or email sheriff@co.clatsop.or.us.

I found this article on a hikers website I'm not sure who posted this but someone is asking for hikers in the Clatsop County area to help in searching for her remains as they hike the trails and wilderness in the area. Also it states that she was last seen at the mini mart getting in a dark colored truck with two unknown men which is highly unlikely for her to get in a vehicle with persons she did not know. Someone out there knows something I wish they would come forward and tell where she is so that she may be properly laid to rest and the person or persons responsible can be brought to justice.

New episode of From The Vault on Joanie Hall is available now!

I found this article on a hikers website I'm not sure who posted this but someone is asking for hikers in the Clatsop County area to help in searching for her remains as they hike the trails and wilderness in the area. Also it states that she was last seen at the mini mart getting in a dark colored truck with two unknown men which is highly unlikely for her to get in a vehicle with persons she did not know. Someone out there knows something I wish they would come forward and tell where she is so that she may be properly laid to rest and the person or persons responsible can be brought to justice.
Click to expand...