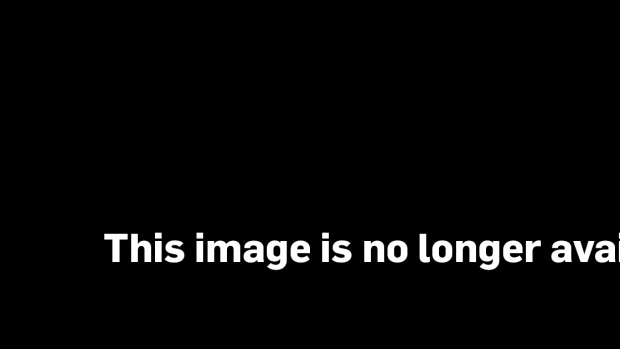 An Amber Alert issued for a three-year-old who police say was abducted in the Bas-Saint-Laurent area of Quebec has been extended province-wide and into New Brunswick.

Quebec's provincial police say Jake Côté was last seen on Aug. 31 at 1 p.m. in Sainte-Paule, a municipality about an hour east of Rimouski.

On Wednesday, the Surete du Quebec (SQ) extended the search to the entire province of Quebec. The RCMP then alerted residents of the Madawaska, Restigouche and Gloucester areas of northwestern New Brunswick to notify police should they see the missing boy or his alleged kidnapper.

He was allegedly abducted by his father, David Côté, seen in the image below.

Police were searching for a grey (hand painted), dirty all terrain vehicle (ATV) Tuesday, which has since been found.

"As a result, the suspect and his son could now be travelling on foot or by vehicle," the SQ said in a news release. "We are asking citizens and motorists to pay attention to the physical and clothing description of David and Jake Côté, but not to venture near Sainte-Paule in order to avoid hindering the search, confusing the dog handlers or risking getting lost."

Police also warn that David Côté could be armed and said anyone who sees him should not try to apprehend him themselves.

The alert now applies to the whole province.

The Sûreté du Québec says Jake was abducted at 1 p.m. Tuesday by 36-year-old David Côté in a dirty, grey all-terrain vehicle that appeared to have been hand-painted. Police located the vehicle Wednesday and now believe the pair could be travelling by car or on foot, which is why they widened the radius of the alert to the whole province.

Quebec provincial police are still searching for three-year-old Jake Côté, the subject of an Amber Alert in Quebec and parts of New Brunswick.

The Sûreté du Québec tweeted Thursday morning that its officers had conducted searches overnight and were getting extra equipment and teams later in the day.

Police widened the territory under alert Wednesday to all of Quebec and parts of northwestern New Brunswick.

Police believe the boy's father, David Côté, 36, abducted him on Tuesday. Côté was the last person seen with the child on Banville Street in the community of Sainte-Paule that afternoon, at 5:15 p.m. ET.

Sainte-Paule is about 630 kilometres northeast of Montreal.

Residents of Sainte-Paule who spoke to Radio-Canada expressed worry and sadness as the search continues.

"Everyone is upset, especially because this affects a child," said Mayor Pierre Dugré.

"We tell ourselves all the time that this will not happen to us, but we realize that we're not immune. We hear more and more about mental health problems and we should all be concerned about this."

Dugré said he doesn't know Côté personally, but said the man's parents live in the area and that he had recently returned to live there.

The mayor also said he is asking community members to share any information they may have with police by calling 911, and "not to venture into the unknown or put themselves in danger." 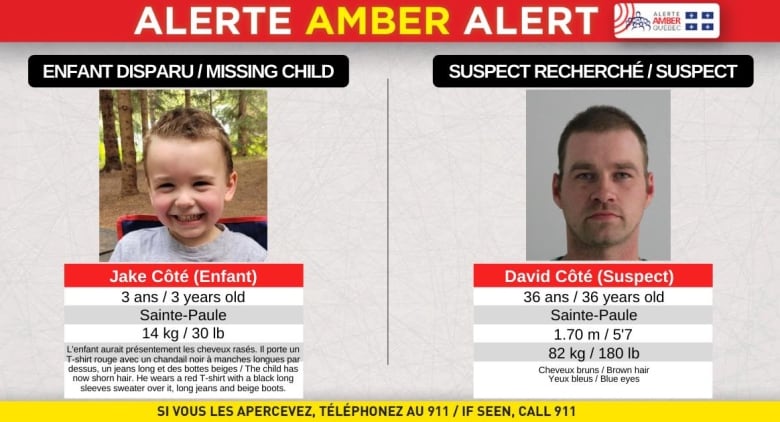 As Quebec provincial police continue their search for three-year-old Jake Côté, the subject of an Amber Alert in Quebec and parts of New Brunswick, they are urging the population not to intervene for safety reasons. “We are dealing with an individual who is possibly armed and who could act on...

As Quebec provincial police continue their search for three-year-old Jake Côté, the subject of an Amber Alert in Quebec and parts of New Brunswick, they are urging the population not to intervene for safety reasons.

“We are dealing with an individual who is possibly armed and who could act on impulse,” the Sûreté du Québec said in a statement late Thursday afternoon.


Police now believe Côté is looking for survival gear and transportation. The investigation has revealed that Côté has in-depth knowledge of the forest and is able to live off the land, police say.

“It is therefore possible that he walked to chalets and outbuildings in the area in order to ensure his survival and that of his child,” the statement says.

Police are asking residents to call 911 if they notice break-in attempts or missing tools, food or equipment.

However, police say, people should not go looking for the man. 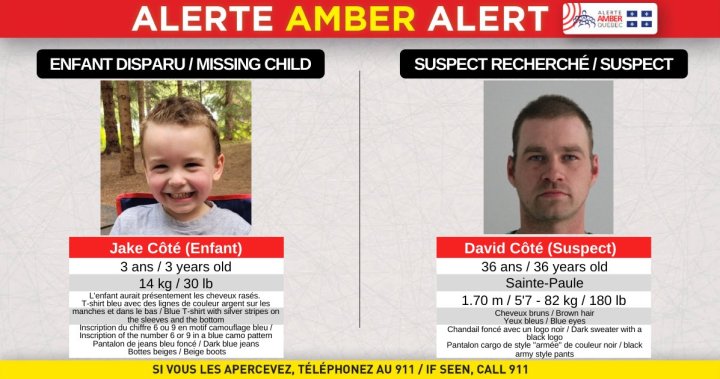 Late Thursday, police said they thought the suspect was hiding in a densely forested area.

Provincial police are continuing a ground search Friday on the south shore of the St. Lawrence River northeast of Quebec City after issuing an Amber Alert for a missing boy on Tuesday.

Late Thursday, police said they thought the suspect was hiding in a densely forested area, noting that Côté had wilderness survival skills and could be using materials gathered from nearby chalets and trailers to survive with this son.

The boy’s father, who triggered the four-day Amber Alert, was arrested following a 20-hour standoff with police.