Heather Johnson was last seen on August 4, 1999 in Glen Burnie, Maryland. She is wanted for attempted murder.

Heather Jean Johnson was last seen on August 4, 1999 in Glen Burnie, Maryland. She had been jailed in Upper Marlboro for an alleged murder plot on her boyfriend and employer. She posted a $300,000 bail and became a fugitive in the summer of 1999.

Heather Jean Johnson was last seen on August 4, 1999 in Glen Burnie, Maryland. She had been jailed in Upper Marlboro for an alleged murder plot on her boyfriend and employer. She posted a $300,000 bail and became a fugitive in the summer of 1999.

She made her living as an exotic dancer in several clubs, including The Block in Baltimore. She may have been seen in Atlantic City, New Jersey. She may still be working in gentlemen's clubs but prefers large cities where the money is more lucrative.

She does not allow anyone to touch her cosmetically enhanced body parts as she has a fear of disfigurement. She is known to flaunt her money and possessions. She is said to like fast money, jewelry, and late model two-door coupes. She is also known to keep her money in safes and safety deposit boxes.

Circumstances: According to law enforcement, Heather Johnson was last seen on August 4, 1999 in Glen Burnie, Maryland. She made her living as a dancer in several clubs, including The Block in Baltimore. She may have been seen in Atlantic City, New Jersey. 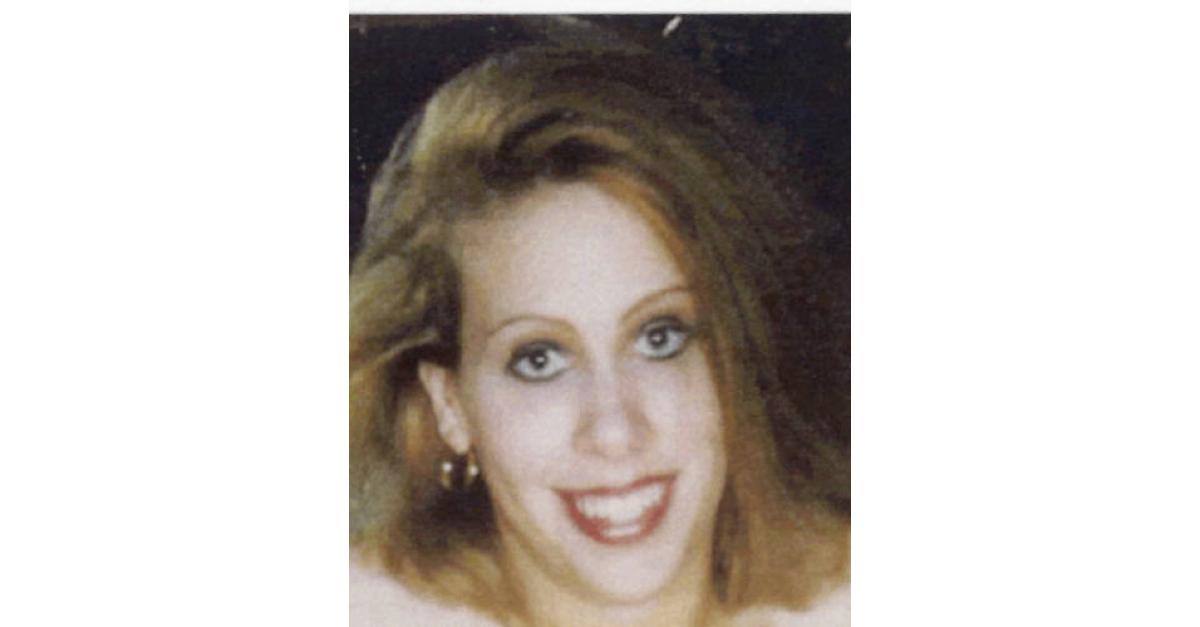 Have you seen this child? Heather Johnson

Missing From: GLEN BURNIE, MD. Missing Date: Wed, Aug 04 1999. This is a photograph of an individual who was reported missing while under age 21 years and who has been entered into the FBI's National Crime Information Center database pursuant to 42 U.S.C. 5779. 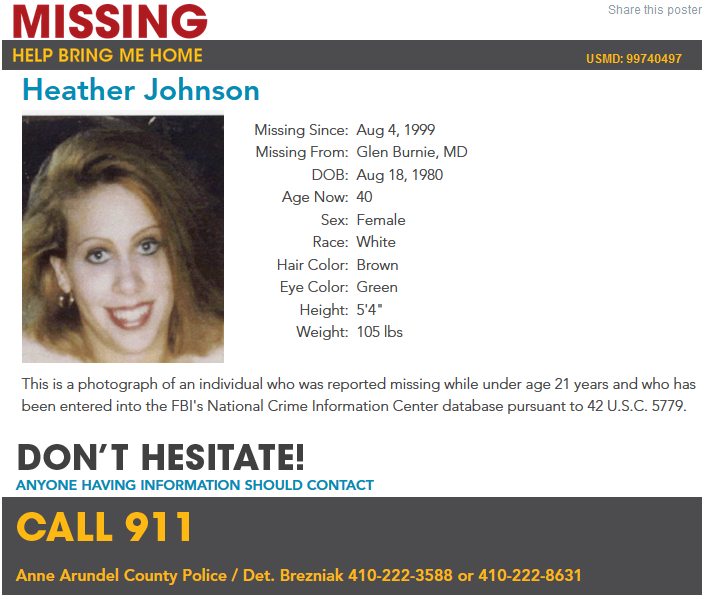 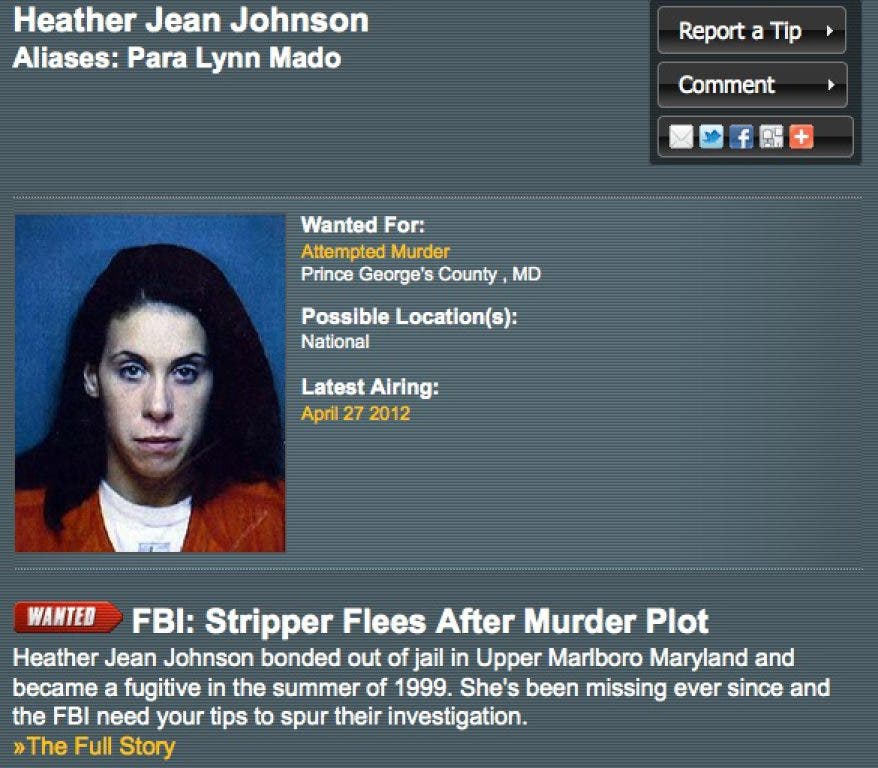 Heather Johnson is wanted on attempted murder charges after jumping bail in 1999. 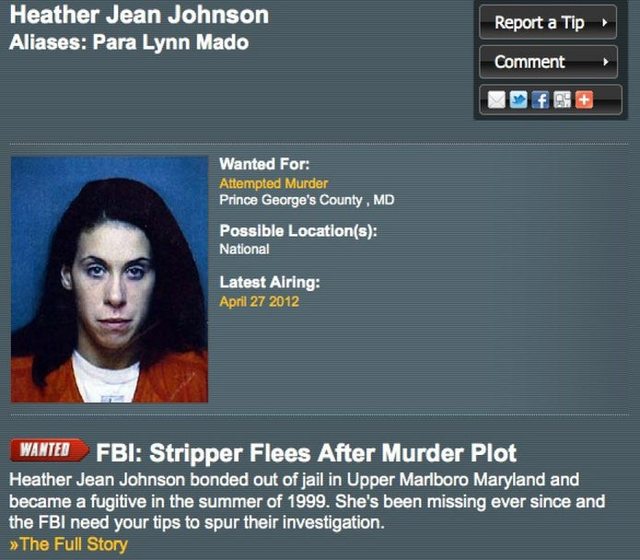 A Glen Burnie native and fugitive was featured on a recent episode of America's Most Wanted, with the Prince George's County Sheriff's Officer tracking her since she allegedly tried to kill her boyfriend in 1999.

According to America's Most Wanted, Heather Jean Johnson, 31, was arrested on attempted murder charges in June 1999 and disappeared in September 1999 after posting $300,000 bail.

Johnson, who worked as an exotic dancer in Maryland, is wanted for trying to kill her boyfriend Bobby, who she suspected stole a safe full of money from her home.

Johnson is described as being a white woman, standing 5 feet 4 inches tall, weighing between 105 and 140 pounds with brown hair and green eyes. 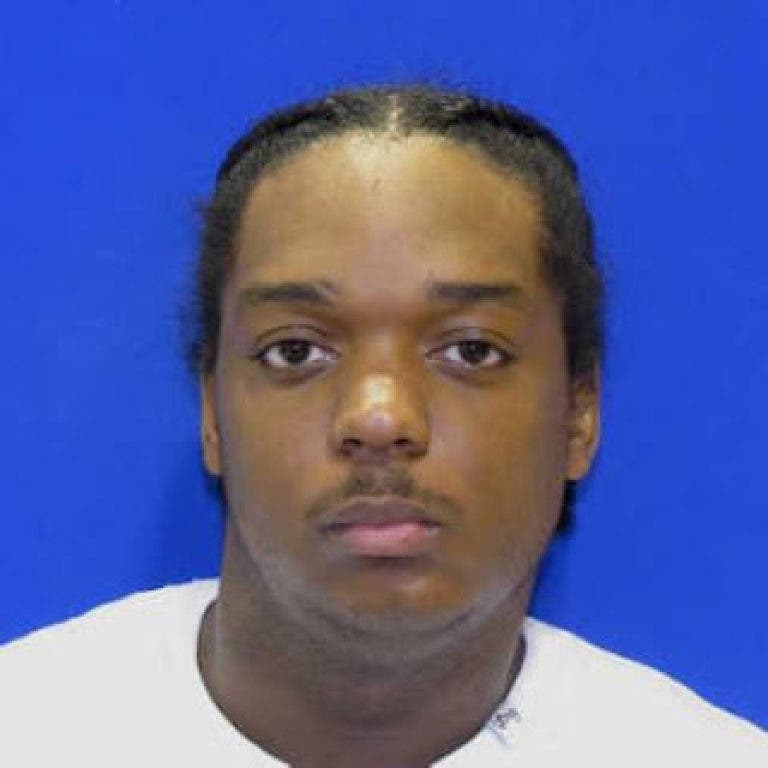 Highlights from police incidents in Prince George's County. Where arrests or charges are mentioned, it does not indicate a conviction.

FBI: Stripper Flees After Murder Plot
A recent TV episode of "America's Most Wanted," featured a story about Prince George's County Sheriff's Office detectives following leads and sightings of Heather Jean Johnson, an experienced exotic dancer from Glen Burnie.
Johnson has been a fugitive on the run since posting $300,000 bail after an attempted murder charge in 1999, according to the show. Johnson, a resident of Meridian in Bowie at the time of the crime, has been missing ever since and the FBI needs your tips to spur their investigation, "America's Most Wanted" reports. For the show's full story of her alleged murder plot on her boyfriend and employer, visit "America's Most Wanted."

If you have any information regarding the whereabouts of Heather Johnson, call the America's Most Wanted hotline at 1-800-CRI
ME-TV.

(Above photo credit: doenetwork.org) Fugitive Profile as of August 30t

Heather Johnson was profiled last year on AMW on Lifetime's "Bad Girls" special. Johnson was in a relationship with her boyfriend Bobby Haislip. They met at the strip club where Johnson was working as an exotic dancer. According to her re-enactment after realizing cash was missing from her house, she accused Haislip of taking it, and hired a couple of men to beat and torture him. Haislip survived, and now according to AMW she is wanted for attempted murder. According to the re-enactment, she also allegedly called and threatened Haislip after the crime. It's believed Johnson may still be stripping anywhere in the country.

What's really bizarre about this case is some sites, including missingkids.com and the doe network list her as a missing person and NOT a fugitive. Although you can say technically she's both.

UPDATE: As of July 24th, 2018, Johnson is still on the Doe Network website (see above link) and also still listed as "Missing" on the missingkids.org website: api.missingkids.org/poster/USMD/99740497

Archived FBI page for Heather, it remarks she may have fled to North Carolina.

Place of Birth: Maryland
Height: 5'2" to 5'4"
Weight: 105 to 116 pounds
Occupation: In the past, Johnson has worked as a dancer in strip clubs.
Hair: Brown
Eyes: Green
Complexion: Johnson has fair skin.
Sex: Female
Race: White
Nationality: American
Scars and Marks: Johnson has scars from breast implants.
Remarks: Johnson may have fled to North Carolina.

Heather Jean Johnson is wanted for her alleged involvement in the assault and attempted murder of a man whom she suspected had robbed her. On June 24, 1999, in Bowie, Maryland, Johnson allegedly lured the victim to her apartment where two men attacked him, stabbed him with scissors, placed chains around his body, and placed him in a plastic bag with the possible intention of throwing him off of a bridge.

Heather made her living as a dancer in several clubs, including The Block in Baltimore. She may have been seen in Atlantic City, New Jersey.

The Block in Baltimore, MD 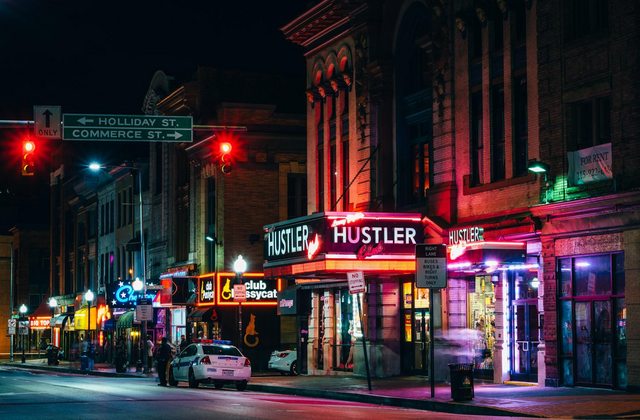 Baltimore's The Block is a stretch on the 400 block of East Baltimore Street in Baltimore, Maryland containing several strip clubs, sex shops, and other adult entertainment merchants. In the first half of the 20th century, it was famous for its burlesque houses. Wikipedia