Eugene's photo is shown age-progressed to 49 years. He was last seen between 5:30 a.m. and 6 a.m. as he was delivering newspapers. A paper bag was found outside of Des Moines with papers still inside. He has a scar on his right knee and has had a broken right wrist.

Witnesses last observed Eugene Martin speaking to a unidentified white male in the vicinity of Southwest 12th Street and Highview Drive in Des Moines, Iowa sometime between 5 and 5:45 a.m. Between 6:10 and 6:15 Martin's newspaper bag was found on...


Details of Disappearance
Eugene was last seen between 5:30 and 6:00 a.m. on August 12, 1984 in his hometown of Des Moines, Iowa. He was preparing to start delivering his morning newspaper route at the time. He normally delivered the papers with his older stepbrother, but his stepbrother was not with him that day.

Witnesses saw Eugene talking to a man between 5:00 and 5:15 a.m. at southwest 12th Street and Highview Drive. The man is described as clean-cut, and he appeared to be in his thirties. He has never been identified. They were reportedly engaged in friendly conversation.

Eugene's route manager called his family at approximately 7:15 a.m. to report that Eugene's newspaper sack had not been retrieved from the corner of southwest 14th and Highview Streets. The manager called the family back 15 minutes later around 7:30 a.m. and reported that the papers were still unclaimed. Eugene's father then called the authorities. Eugene has not been seen nor heard from again.

Eugene disappeared from the same vicinity where John Gosch was last seen in 1982. It is not known if the two cases are related, but both boys were newspaper carriers in the Des Moines area.

Eugene enjoyed football, fishing, skating, watching television and playing video games at the time of his disappearance. His father and stepmother divorced sometime after he went missing, and now both of his parents are deceased. His case remains unsolved.

August 12, 1984 — Eugene Martin
Eugene Martin got an early start at 5 a.m. to deliver the Des Moines Register newspaper on his regular paper route. His older brother normally accompanied him, but on this day Eugene went alone; the Iowa State Fair was in town, and Eugene wanted to earn some extra money to spend at the fair.

Sometime between 5 and 5:45 a.m., residents living near Southwest 12th Street and Highview Drive observed Gene speaking to a clean-cut white male in his 30s. The teen folded papers as he spoke to the man, and the witnesses said the conversation appeared friendly — almost like a “father-son” sort of conversation.

Less than an hour later, sometime between 6:10 and 6:15, the boy’s newspaper bag was found on the ground outside Des Moines — 10 folded papers still inside.

Authorities issued a nationwide bulletin for a man described as between 30 and 40 years old, 5 feet, 9 inches tall, clean shaven and with a medium build. Federal agents wondered if Eugene’s disappearance might be connected to that of missing Register paperboy Johnny Gosch, 12, who’d gone missing two years earlier on September 5, 1982.

Eugene Martin’s aunt, Jeannie McDowell, told WHO-TV’s Aaron Brilbeck in a July 2010 Iowa Cold Cases segment that she believed her dying brother — Eugene’s father Don Martin, in the final stages of Alzheimer’s Disease and also suffering from cancer — was hanging on and needed some type of closure in his son’s disappearance before he could let himself go. Gene’s mother, Janice, had recently died from diabetes without ever knowing what happened to her child.

Don continued to read and clip from daily papers every article or reference he could find about Eugene, McDowell said.

But like his wife, Don Martin died still waiting for answers; he passed away on December 27, 2010.

Many Iowans believe both Johnny Gosch and Eugene Martin were kidnapped and sold into a pedophile sex ring, though nothing has ever been proven to support the theory.

Martin’s remaining family members — like Johnny Gosch’s mother Noreen — continue to wait and hope for the one strong lead that breaks open the case and provides long-awaited answers and justice.

Trace Evidence recently did a very good and in depth episode on Eugene's abduction. In 1982, Johnny Gosch became one of the first children to be featured on milk cartons across the country, after he vanished while on his paper route.

In 1982, Johnny Gosch became one of the first children to be featured on milk cartons across the country, after he vanished while on his regular paper route in Des Moines, Iowa. 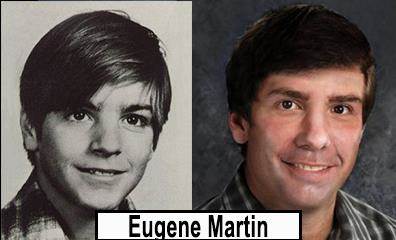 Over 32 years later, little is known about what happened to Johnny on September 5th, 1982. While investigators and his family believe he was kidnapped, they have never uncovered evidence that supports that. To date, they have no suspects and no arrests made. Two years later in 1984, another paperboy, Eugene Martin, also went missing out of the Des Moines area. Police have never established a connection between the two cases. 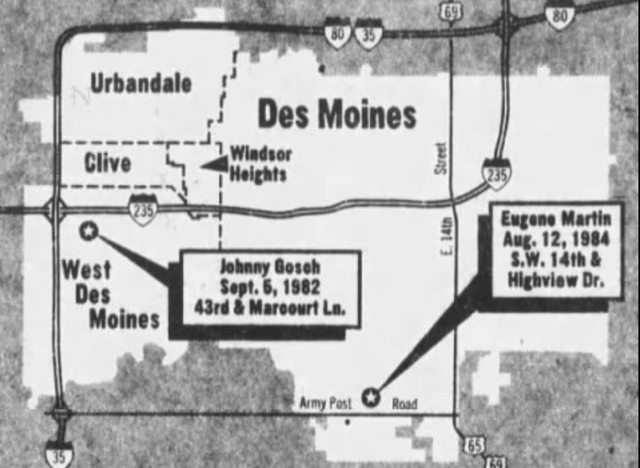 Map showcasing the close proximity between where Johnny Gosch and Eugene Martin were abducted.

Witnesses last observed Eugene Martin speaking to a unidentified white male in the vicinity of Southwest 12th Street and Highview Drive in Des Moines, Iowa sometime between 5 and 5:45 a.m. Between 6:10 and 6:15 Martin's newspaper bag was found on the ground at the corner of southwest 14th and Highview Streets with the newspapers inside. 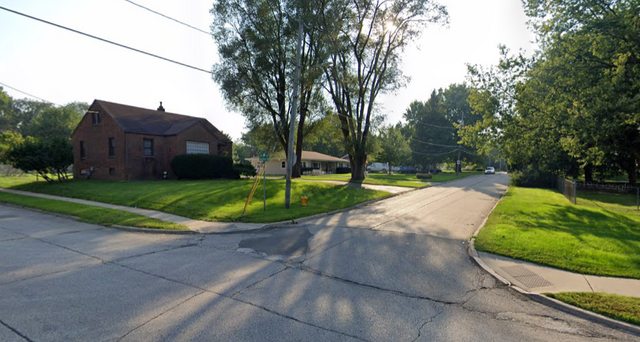