The National Center for Missing and Exploited Children has added Dashawn McCormick to its database as a missing person. The now 6-year-old boy from Anchorage has officially been missing since April 1, 2013, according to the center. Step-grandmother Judy Holmes, who lives in Big Lake with boyfriend Michael Gearing, said she hasn’t seen the boy since July 4, 2012. The child’s father and step-mother are both incarcerated, she said. 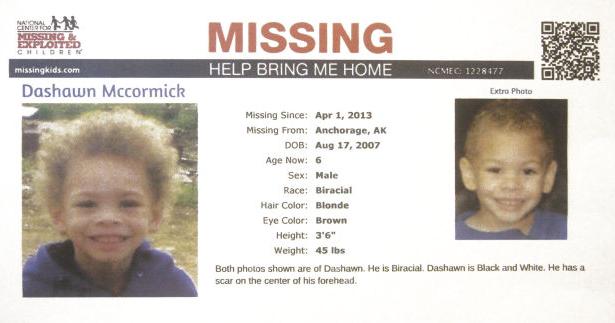 MAT-SU — A Big Lake couple searching for a child missing for nearly a year have received a boost from a national agency.
www.frontiersman.com
Media - DASHAWN MCCORMICK: Missing from Anchorage, AK since 1 April 2013 - Age 4
Click to expand...

Staff member
I really don't understand why Dashawn's case got next to no publicity. It's the same circumstances we've heard so many times.

Da'Shawn lived with his father, Floyd Leroy Lee Jr., in Anchorage, Alaska in 2013. On April 1 of that year, the police came to their home to arrest Lee on federal fraud charges. Da'Shawn wasn't with him and he has refused to reveal the child's whereabouts.

Lee was sentenced to prison for fraud, as was Da'Shawn's stepmother, Mary Elizabeth Transki. Both have since been released. Da'Shawn's mother, Jasmine McCormick, who lives in Alabama, now has full custody of him. She stated she left Lee in March 2012, taking her three other children but leaving Da'Shawn because Lee had full custody at the time.

Jasmine described Lee as abusive and said she left because she was in fear of her life. She last spoke to Da'Shawn in June 2012. Transki's mother said she last saw Da'Shawn on July 4, 2012. After that, whenever her grandchildren came to visit her, Da'Shawn wasn't among them.

Da'Shawn may be in the Matanuska-Susitna Borough area. His mother hopes he was given to another family before Lee's arrest. The circumstances of his disappearance are unclear and his case remains unsolved.

For The Missing: Pacific Northwest

For The Missing: Pacific Northwest. 35,566 likes · 426 talking about this. This page highlights missing children and adults of the Pacific Northwest, and AMBER Alerts from across North America. This...

Police in Alaska’s largest city are reaching out to the public to see if people can provide new leads in the disappearance nine years ago of a 6-year-old boy. DeShawn

Police in Alaska’s largest city are reaching out to the public to see if people can provide new leads in the disappearance nine years ago of a 6-year-old boy.

DeShawn McCormick’s mother said she last saw her son in the spring of 2013 during a visit to Alaska. She had previously moved out-of-state, and DeShawn’s father, Floyd L. Lee Jr., had legal custody and lived with the child in Alaska.

It was discovered that DeShawn was missing when later that year his father and his father's girlfriend were arrested by the FBI on unrelated securities fraud charges and a court granted DeShawn's mother custody of the boy.

Law enforcement officials, however, were unable to find DeShawn and said there was no indication that any other child other than the girlfriend’s two children were living at the home the father and girlfriend shared. Authorities determined DeShawn hadn't been seen or heard from since April 2013.

The National Center for Missing and Exploited Children lists the boy’s disappearance date as April 1, 2013. The FBI was the initial investigating agency, and the Anchorage Police Department got the case Feb. 10, 2014.

“This case is unique being the length of time that DeShawn has not been seen,” Police Detective Dave Cordie told reporters on Thursday.

However, he said there are success stories of children being found after long absences.