HESTERFIELD COUNTY, Va. (WWBT) - Chesterfield police are still working to identify the remains of a woman that was found in 1986.

On Aug. 7, 1986, workers were unloading trash from the School Street transfer station in Richmond at a Chesterfield landfill, when they noticed human remains.

Chesterfield police conducted a thorough search and recovered what appeared to be the remains of a woman.

By combining these attributes, the unknown woman may have been 25 years old, between 5 foot 1 and 5 foot 7 with an average body mass index of 22.
The female was also wearing pink toenail polish and a dark rubber-like bracelet was on her left ankle.

The cause of death was determined to be a homicide, according to the medical examiner.

Detectives say the victim may have ties to Richmond, Charlottesville, Buena Vista, Lynchburg and Baltimore, Maryland. 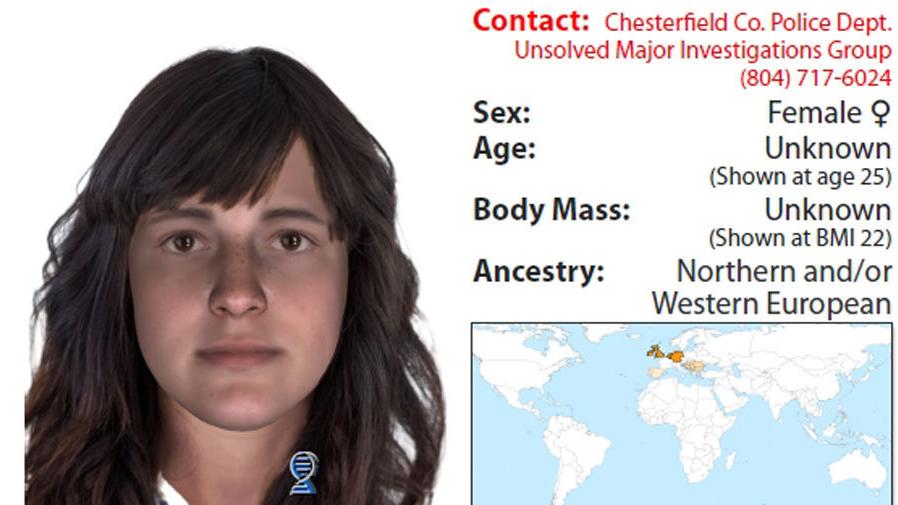 Chesterfield police trying to identify body found in landfill in 1986

Police conducted an extensive search and recovered human remains, which were taken to the Office of the Chief Medical Examiner for analysis. It was determined the cause of death was homicide.

According to news accounts at the time, police thought the slaying was committed by a psychopath. The missing parts were the victim's head and hands, which had been sawed from her body. Police said at the time they believed the body may have been stored for up to two months in a cool, insect-free environment.

Police said Monday that the autopsy and other tests completed by the medical examiner revealed that the remains were those of a white female, about 22 years old to 32 years old.

She was likely between 5 feet 1 inch and 5 feet 5 inches tall, likely weighed between 105 pounds and 120 pounds and wore a size 7 or size 7 ½ shoe. She was wearing pink toenail polish and a dark, rubber-like bracelet or band was on her left ankle, said police.

The medical examiner, the Virginia Department of Forensic Science and the Chesterfield County Police have been working to identify the body and have ruled out multiple missing persons using various techniques, including DNA comparisons. To date, the victim remains unidentified.

Last year, detectives sought the services of Parabon NanoLabs, a DNA technology company in Reston that specializes in DNA phenotyping - the process of predicting physical appearance and ancestry from unidentified DNA evidence.

Detectives have determined that she may have had ties to the Richmond, Charlottesville, Buena Vista and Lynchburg areas in Virginia as well as Baltimore, Md.