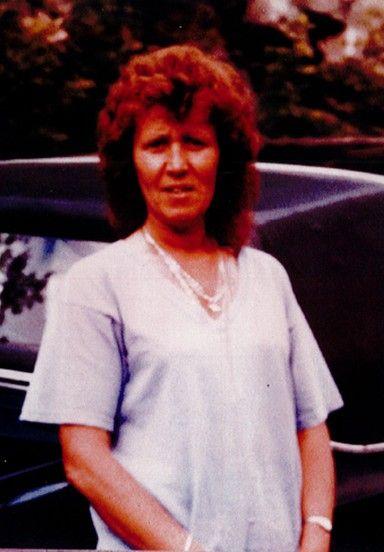 Carol Ryan was last seen on September 1, 1996 leaving East Room Bar off of James Street at approximately 2 a.m. Several hours later she was found seriously injured and left to die on Route 91 in Jamesville, NY. Carol was taken to the hospital where she died from her injuries after five hours of surgery.

Authorities stated that Carol had been brutally beaten and somebody had inserted an explosive device into her vagina. No one was been charged in this case.
Last edited: Mar 1, 2020
Click to expand... 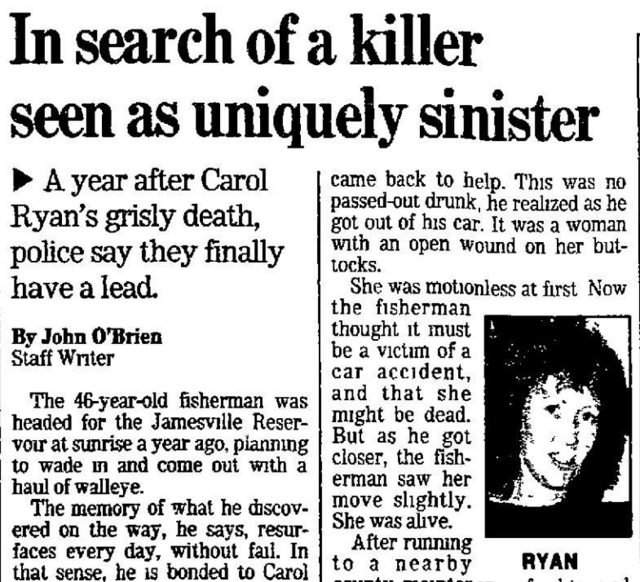 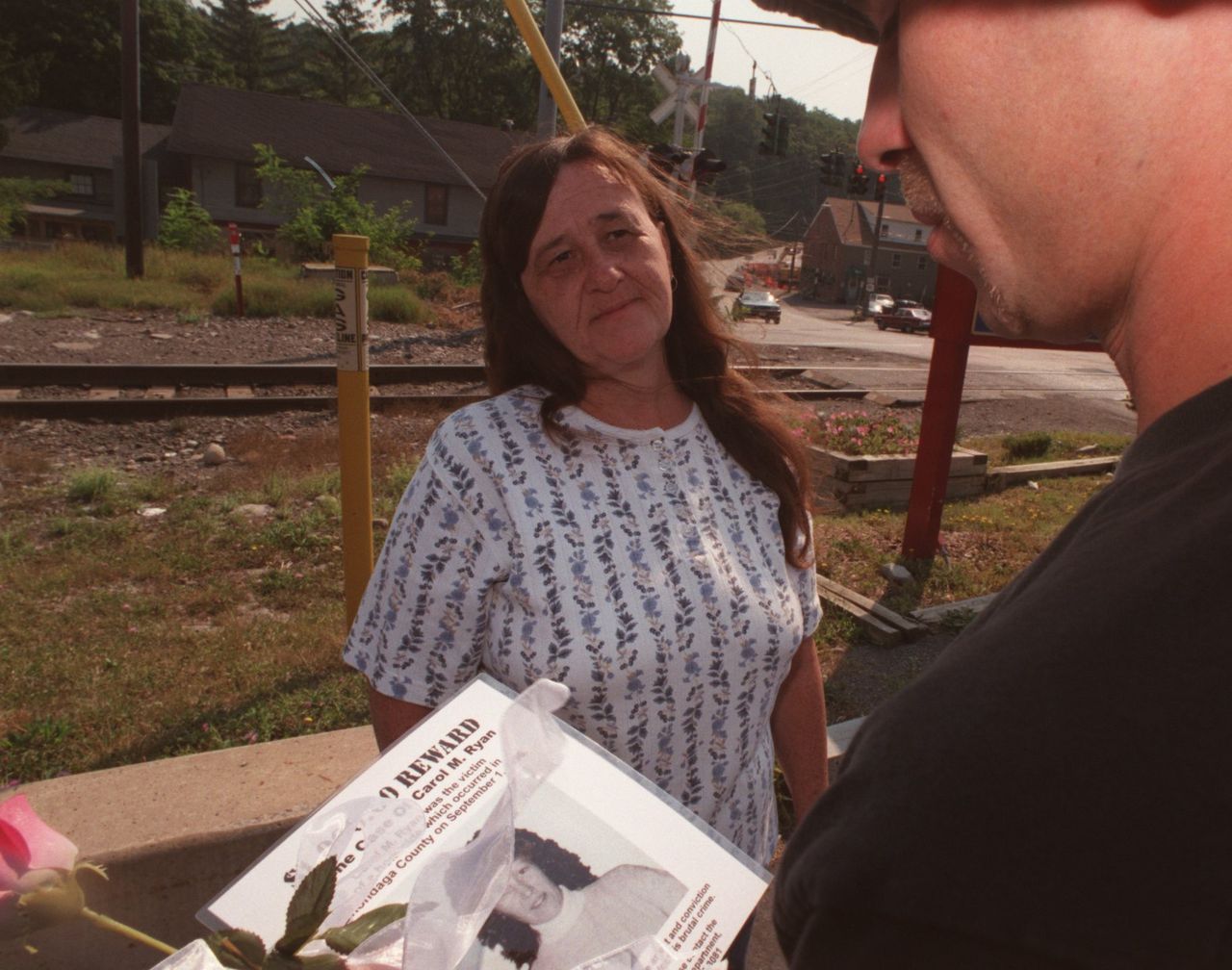 Carol Ryan died hours after a fisherman found her fatally wounded in Jamesville.

JAMESVILLE, N.Y. -- When a fisherman found Carol Ryan naked and face-down in Jamesville on Sept. 1, 1996, he thought she had been shot.

She was barely alive in the driveway of the Onondaga County Resource Recovery Agency's driveway, according to The Post-Standard | Syracuse.com's archives.

Ryan, 42, had been fatally wounded in an unimaginable manner: Someone had inserted an explosive device into her vagina and detonated it.

She was rushed to a Syracuse hospital, where she died five hours later. And 20 years later, her murder remains unsolved.

Ryan spent her last night alive at the East Room bar in Eastwood, according to The Post-Standard | Syracuse.com's archives. She stayed until the bar closed at 2 a.m. -- extending an open invitation for breakfast to anyone who was interested.

Ryan left the bar alone. And hours later, she was fatally wounded and left to die near a county resource recovery site off of Route 91.

After Ryan's death, investigators conducted hundreds of interviews and tracked a host of leads. Two of her loved ones -- her son, Shawn Hamilton, and her sister, Kathy Lane -- have joined investigators in seeking justice for Ryan, hanging up posters and working to ensure her death was not forgotten.

Two decades later, no arrests have been made.

SYRACUSE, N.Y. -- Investigators are offering a $10,000 reward for any tips that lead to an arrest and conviction in the cold case murder of Carol Ryan.Ryan was last seen on September 1, 1996 at 2 a.m. leaving the East Room Bar off of James Street before sh

SYRACUSE, N.Y. -- Investigators are offering a $10,000 reward for any tips that lead to an arrest and conviction in the cold case murder of Carol Ryan.

Ryan was last seen on September 1, 1996 at 2 a.m. leaving the East Room Bar off of James Street before she was found beaten, tortured and left to die on Route 91 in Jamesville. Investigators say someone planted an explosive device inside her and detonated it.

Ryan died at the hospital from her injuries after five hours of surgery.

Detectives are hoping with the passage of time someone will be willing to come forward with information that may be the key to solving the cold case and help bring a sense of closure to the Ryan family. During a news conference on Wednesday, Ryan's son made a plea for someone to come forward with information that could help solve his mother's murder.

"Just help my family," said Shawn Hamilton. "I have three kids now. They are always asking questions about who their grandmother is, how she died. They are absolutely the hardest questions I have ever been asked in my life."

Investigators are also hoping modern technology can help take a tip and turn it into the key that breaks open the case.

"The Forensic Science Center has been there every step of the way since we formed the Cold Case Task Force," said Chief Assistant District Attorney Rick Trunfio. "They have been reviewing evidence. We were just there a couple weeks ago with the detectives going over things. What are the new technologies, what are the new possibilities."

Anyone with information is asked to call the Onondaga County Sheriff's Office at 315-435-3051. 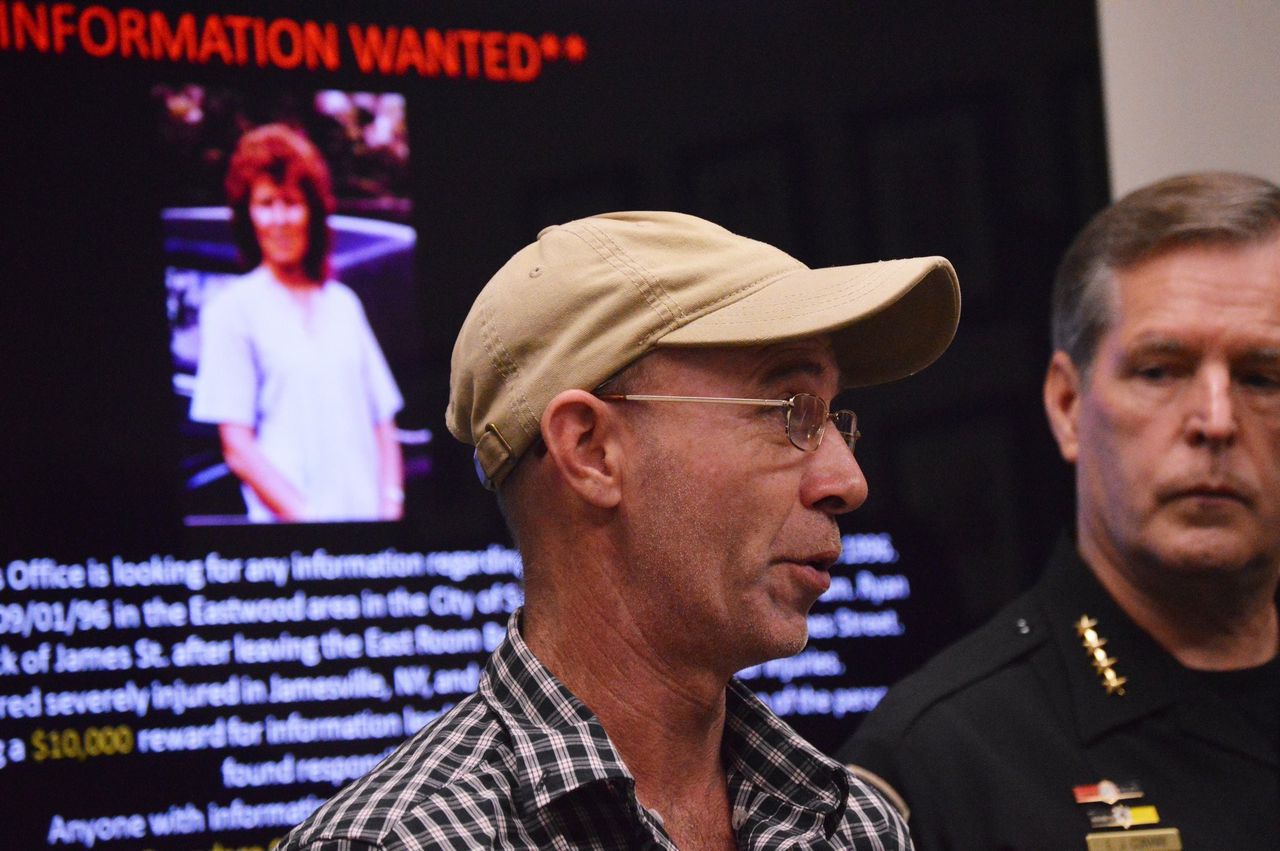 Carol Ryan was murdered on Sept. 1, 1996 in Jamesville. Her homicide remains unsolved. 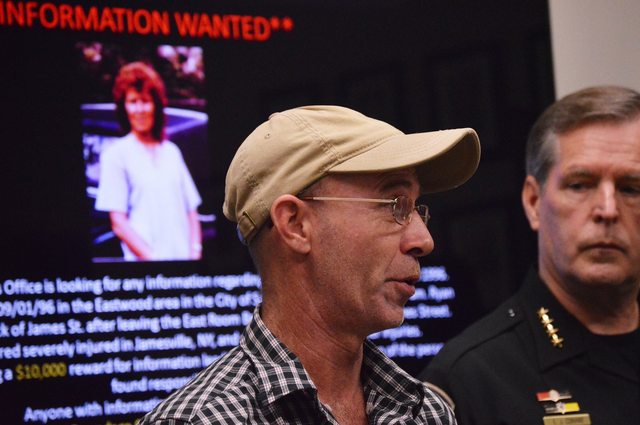 SYRACUSE, N.Y. -- Since the day his mother was brutally murdered 20 years ago, Shawn Hamilton has had no shortage of painful moments.

But nothing has been harder, he said, than answering his children when they ask what happened to Carol M. Ryan -- the grandmother they never got a chance to meet.

Someone inserted an explosive device into Ryan's vagina on Sept. 1, 1996 and detonated it. They then left her naked and dying in a driveway off of Route 91 near the Jamesville Reservoir Two decades later, her murder remains unsolved. And on the eve of the 20th anniversary of Ryan's death, Hamilton asked the public to help find his mother's killer.

"Just help my family," he said, his voice shaking.

Conway asked the public to come forward with any information about the murder.

"We're hoping that the passage of two decades has led to a change of heart," Conway said.

The reward was given by an anonymous donor. Hamilton, First Chief Assistant District Attorney Rick Trunfio and investigators joined Conway as he announced the reward.

Conway was a the department's captain of investigations 20 years ago when deputies were called to the scene of the attack.

A fisherman ran for help just before sunrise on Sept. 1, 1996 after finding Ryan alone and barely alive in the Onondaga County Resource Recovery Agency's driveway. Ryan died five hours later at a hospital.

Conway said detectives worked on chasing down a lead as recently as last week. Detective Bill Root, one of the detectives investigating the cold case, would not comment of whether the department has any suspects.

In addition to the monetary incentive, Conway said witnesses now have more ways to share information than they did 20 years ago. He asked anyone with information to call (315) 435-3051 or text TIP411.

Hamilton speaks to his children about their grandmother and has photos of her around the home. He said he keeps one photo of Ryan next to his coffeepot -- ensuring the first thing he does every day is say "good morning" to his mother.

It has been a long, hard 20 years since his mother's murder, Hamilton said. But he hasn't stopped hoping that his family will find answers and justice.

Once a month, YNN is bringing a cold case to your attention in an effort to help bring the killer or killers to justice. This month, YNN's Joleene Des Rosiers explores the unsettled death of 42-year-old Carol Ryan. Murdered in Jamesville, NY, in 1996.

JAMESVILLE, N.Y. -- "What struck me, of course, as it did most of the detectives that have worked on this case was the nature of the injuries. Obviously, the perpetrator had taken some type of explosive device. I think we speculated it might have been an M80. Placed it in her vagina and set it off," said Onondaga County District Attorney William Fitzpatrick

A heinous, despicable, indescribable crime. Someone, in the early morning hours of September 1, 1996, brutally beat 42-year-old Carol Ryan beyond recognition and left her to die at the entrance of the Onondaga County Resource Recovery Agency in Jamesville.

"This is one of the most gruesome deaths that I had ever seen. The use of an explosive. The extensive beating said Onondaga County Sheriff Kevin Walsh.

For her son, Shawn Hamilton, the pain of her death is unbearable even after 15 years. His mother will never know his family. "I pray. I pray a lot. I know that she's still looking out for me," Hamilton said.

Carol Ryan lived in Eastwood at Grant Village Apartments. Her mode of transportation? Her feet. She often walked to where she needed to go. Including a local bar not far from her home.

"The last place she was seen alive for sure was the East Room Tavern on James Street in Eastwood section of the city," Fitzpatrick said.

"She was last seen leaving the bar wearing a black jacket with fringe. A silver silk blouse and dark colored jeans," Hall said.

She left alone. Somehow, somewhere, she found company. They beat her, drove her to the side of Route 91 in Jamesville, dumped her body at the entrance of the OCRRA site and then detonated an explosive device in her pelvis. She lay there for at least three hours, moaning, fighting for her life.

"She was discovered a little after 5 o'clock in the morning on September 1, 1996, by a passing motorist. He was on his way to fish," Hall said.

"He saw something alongside the road," said Walsh.

It was Carol Ryan. Barely alive. EMTs moved fast to save her. But she died during surgery. And authorities have never stopped looking for her killer.

"The reason that we're even discussing this case is because we feel certain that there are people out there that may have seen something either that night or the following morning or in the 15 years since that have some information. They may be afraid of this person, justifiably so. We can make efforts to protect them. We can put them in protective custody. We can move them. We can do a lot of things. But we need someone to come forward and give us the missing pieces that we need to finally solve this case," Fitzpatrick said.

"The guilt can weigh on people. And it can be the thing that triggers somebody to come forward. Not that they necessarily were the ones who did it, but they have that guilty knowledge on who committed this crime," said Walsh.

"My Mom was gruesomely beaten and killed. And what kind of closure can you ever have on that? I have to live the rest of my life like this. With these thoughts, with these feelings," Hamilton said.

"This is one of those cases that she sustained such traumatic injury, that everyone has a vested interest in this in getting it closed. We look to the public. If you have any information or any recollection about things that may have been mentioned to you in 1996 or even recently. Give us a call," said Hall.

Carol Ryan's personal affects have never been found. Her purse. A red, ruby ring. Fitzpatrick believes the killer went to great lengths to get rid of these items in an effort to hide any DNA evidence. But some evidence still remains. And new technology is bringing them even closer. All they need now is that one tip from you.

WTH IS WRONG WITH PEOPLE?! That is one of the sickest things I've ever heard of.

Just thinking about this. That is such an extreme level of violence. It shows extreme anger IMO. And humiliation to her to where it seems personal. Maybe she knew the person. Funny there wouldn't be a suspect. But I don't get the feeling that it was a stranger.

The Onondaga County Sheriff's Office is asking for the public's help as it continues to investigate a 25-year-old unsolved murder case. Detectives are still looking for information on who may have killed Carol M. Ryan, a Syracuse woman who was brutally murdered in 1996. Ryan, then 42, was found...

Detectives are still looking for information on who may have killed Carol M. Ryan, a Syracuse woman who was brutally murdered in 1996.

Ryan, then 42, was found beaten and left to die along Route 91 near the Jamesville Reservoir on Sept. 1, 1996. She was taken to Upstate Hospital, where she later died. Detectives said an explosive device caused her injuries. Ryan was last seen alive on James Street in the Eastwood area of Syracuse.

Detectives believe that with the passage of time, someone may be willing to come forward with information. They said solving this cold case could help bring a sense of closure to the Ryan family.

The Sheriff's Office is offering a $10,000 reward for information leading to the arrest and conviction of Ryan's murderer. Anyone with information should call the office's tip line at 315-435-3051 or send a tip to tip411.
You must log in or register to reply here.
Share:
Facebook Twitter Reddit Tumblr Email Share Link