Grimes was last seen in Jacksonville, Texas on December 1, 1990. She has never been heard from again. Few details are available in Grimes's disappearance.

Missing Since: 12/01/1990
Missing From: Jacksonville, Texas
Classification: Missing
Sex: Female
Race: White
Date of Birth: 11/27/1964 (55)
Age: 26 years old
Height and Weight: 5'4, 105 pounds
Distinguishing Characteristics: Caucasian female. Brown hair, hazel eyes. Grimes has a tattoo of a unicorn on the left side of her chest and a three-inch tattoo of a unicorn's head and her nickname "Cammy" on her right shoulder blade. (Her nickname is also spelled "Cammi.") She has a scar and a scar on her left ankle. Grimes wears eyeglasses. She may use the last name Hoisington.

Details of Disappearance
Grimes was last seen in Jacksonville, Texas on December 1, 1990. She has never been heard from again. Few details are available in Grimes's disappearance. 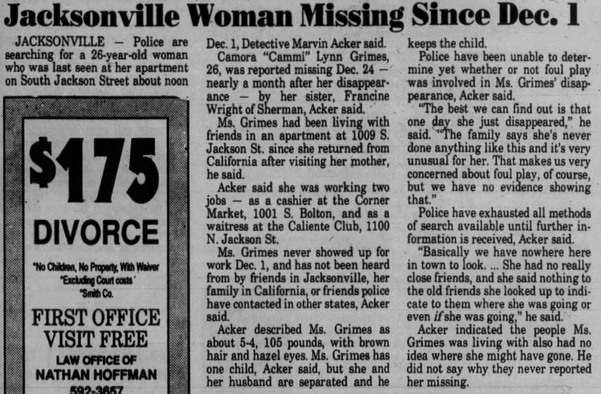 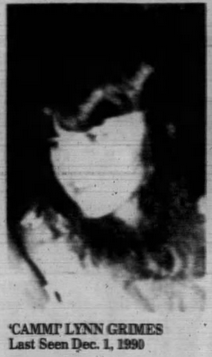 At the time of her disappearance, Camera Grimes was holding down two jobs in Jacksonville, one as a waitress at the Caliente Club, 1100 N. Jackson St., and another as a cashier at the Corner Market on South Bolton. The 26-year old Ms. Grimes failed to show up for work at either business on Dec. 1, 1990. All Ms. Grimes' clothing remained at the South Jackson Street apartment of a male friend with whom she had been staying. "Her friend saw her one morning and that evening he went to visit her at work, Jacksonville Detective Marvin Acker said. '"She wasn't there, so he went back to the apartment thinking she had overslept. She hasn't been seen or heard from since." Ms. Grimes was not reported missing to police until Dec. 24, by her sister Francine Wright of Sherman. Since that time, police have contacted friends, both home and abroad, and family members in Texas and, California, but to no avail. Ms. Grimes has one child, who remains in the care of her husband, from whom she is separated. Acker said foul play "is a very real possibility' in the case, although police have found little evidence to suggest any reason for Ms. Grimes' disappearance. Family members did tell police the missing woman has ''never done anything like this before''
Ms. Grimes "has a habit of changing her appearance," Acker, said. "she will fix her hair differently and she looks like a different girl''
You must log in or register to reply here.
Share:
Facebook Twitter Reddit Tumblr Email Share Link