On March 29, 1986 children attending a birthday party at the residence in Marbury, Alabama, discovered the skeletal remains in what was known as a root cellar (storm shelter type).

#JaneDoe was in a root cellar for about 5 years before she was discovered. We still don't know who she was! #ALABAMA 1986

On March 29, 1986 children attending a birthday party at the residence in Marbury, Alabama, discovered the skeletal remains in what was known as a root cellar (storm shelter type).

*Click the Report button on a case if you'd like it to be moved to the general discussion area to be opened for commenting.*
Last edited by a moderator: Mar 3, 2020

'The Lady deserves a name': In Autauga, a 34-year-old cold case killing has not been forgotten

She was a murder victim, dying of three gunshot wounds to the head from a small caliber firearm. She had slightly curly, light brown hair.
www.montgomeryadvertiser.com

'The Lady deserves a name': In Autauga, a 34-year-old cold case killing has not been forgotten

It’s all part of a cold case investigation by the Autauga County Sheriff’s Office. A woman’s skeletal remains were found in a root cellar in Marbury on March 29, 1986. She was a murder victim, killed by three gunshot wounds to the head from a small-caliber firearm. She had slightly curly, light brown hair.

This is a photo of a clay reconstruction of the victim in a 1980's homicide cold case that the Autauga County Sheriff's department is reopening. (Photo: Contributed)

She has never been identified.

'Everybody deserves a name'
Sheriff Joe Sedinger knows Sutton faces an uphill battle. It’s been almost 34 years. Witnesses and potential suspects may have died or moved away. Her remains, stored at the Alabama Department of Forensic Sciences cannot be found. So even if a potential relative is found, there is nothing to provide a DNA sample for comparison.

“Everybody deserves a name,” the sheriff said. “She was somebody’s child. Our priority is identifying her. If we can do that, maybe we can find who did this to her. But first we have to know who she is.”

Her remains were found in one of three root cellars on the property at Route 1, Box 114 B, Marbury. That was before 911 mapping changed addresses in the county. The address now is in the 400 block of County Road 20 West. The current property owners have been cooperative with the renewed investigation, and have no connection with the remains, Sutton said.

In law enforcement vernacular, unidentified female victims are called Jane Does. Sutton refers to the remains as “the Lady.”

“Somebody, somewhere knows who the Lady is,” she said. “She is not a bunch of bones dug up from a root cellar. Somebody gave birth to her and loved her. We need to know who she is.”

'I want to make a difference'
Sutton is a seasoned cop, with 26 years in. She started as a dispatcher in public safety, now called the Alabama Law Enforcement Agency. She went to the academy and became a road trooper assigned to Autauga County. From there she went to the Alabama Bureau of Investigations, working numerous murder cases. She retired as a lieutenant in the Highway Patrol Division’s Mobile office.

And she moved back to Autauga County. After five years she became a part-time investigator at the sheriff’s office. That drive doesn’t go away.

“I want to make a difference in my community,” she says. “I want to see bad people who hurt good people put away.”

Her work is cut out for her with the Lady. Autopsy reports estimate she was between 30 to 35 years old, and between 5-feet-3-inches and 5-feet-five-inches tall. The only article of clothing found with the remains was a halter top with decorative rhinestones. She had extensive dental work done, including a partial denture plate.

The old case files, musty smelling from years in a storage unit, speak to Sutton. Call it a cop’s intuition.

“I don’t think she’s local,” Sutton said. “We checked and there were no active missing persons cases in the area at that time. I think she had money, or had money at one time, due to the type of dental work she had done.”

Sutton has put the dental records in a national crime database. She has also reissued the Lady’s information in missing person’s databases. Something may stick.

Sutton thinks the Lady was down there five or six years before the March day in 1986. The family was holding a birthday party. Kids were playing ball in the yard. For years adults had told the children not to go into the root cellars, long unused, because of the dangers of snakes.

The ball went into the cellar where the Lady was. A young boy went it to get the ball. He ran out telling his friends he had found a “monster” in the hole, Sutton said. Boys being boys, they told him to prove it. So he returned to the cellar clutching a stick and came out of the hole with her skull.

“They did a good investigation, the case file is good,” she said. “They talked to several people and witnesses.”

A facial reconstruction was made. That may be the key to everything.

'The skull is somewhere'
“It was policy at forensics then to cremate remains after a certain length of time,” Sutton said. “She had never been identified. But I can’t believe they destroyed the skull after having a reconstruction done. The skull is somewhere. It may be in somebody’s back storage room or in a box in a warehouse somewhere.

“It won’t have a name attached. But that skull is somewhere.”

That’s the type of thinking Sedinger wants to see. The Lady was found when Robert Turner was sheriff. Sedinger joined the force in the 1990s when Herbie Johnson was sheriff. He worked his way up from road deputy to investigator.

“I looked at it from time to time but really couldn’t get too involved because we had too many current cases going on.”

Sedinger put the file away, but the case never left his thoughts. When Sutton came aboard about four months ago, the case began to float around in his mind even more.

“I brought Lynn into my office and asked her if she would review the files and tell me what she thought,” the sheriff said.

From that moment the hunt was on. Sutton works current cases, and picks up the Lady’s files during her off time.

The initial investigation retrieved three bullets and a spent shell casing. Those bullets could be the missing piece. Sutton has burned up the phone and email lines for the FBI crime lab and private labs to see if there is any chance the Lady’s DNA can be lifted from the bullets.

But it comes with a risk.

“If there is DNA on the bullets, I have to be sure it won’t be destroyed in the retrieval process,” she said. “Because now that’s the only potential evidence we have to get her identity. There has been remarkable progress made in methods for gathering DNA. I just need to make sure we can protect anything we have.”

Until then, its burning shoe leather and countless hours clicking the keyboard for Sutton.

“I’ve talked to several people, and plan to talk to more,” she said. “I’m doing it for her and her family. Somebody is looking for her.

“The Lady deserves a name.”

Do you have any information? 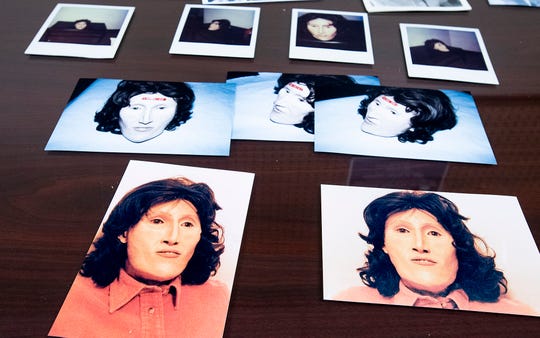 Photo of a clay reconstruction of the victim in a 1980's homicide cold case that the Autauga County Sheriff's department is reopening. (Photo: Mickey Welsh / Advertiser)