Asha Jaquilla Degree (born August 5, 1990; first name pronounced AY-shuh[1]) went missing at the age of nine from Shelby, North Carolina, United States. In the early morning hours of February 14, 2000, for reasons unknown, she packed her bookbag, left her family home north of the city and began walking along nearby North Carolina Highway 18 despite heavy rain and wind. Several passing motorists saw her; when one turned around at a point 1.3 miles (2.1 km) from her home and began to approach her, she left the roadside and ran into a wooded area. In the morning, her parents discovered her absence. No one has seen her since.[2]

An intensive search that began that day led to the location of some of her personal effects near where she was last seen. A year and a half later, her bookbag, still packed, was unearthed from a construction site along Highway 18 north of Shelby in Morganton. At the point where she ran into the woods, a billboard now stands appealing for help finding her. Her family hosts an annual walk from their home to the billboard to draw attention to the case.

While the circumstances of Degree's disappearance at first seemed to suggest she was running away from home, investigators could not find a clear reason she might have done so, and she was younger than most children who do so. They have speculated that she might have been abducted instead. The case has drawn national media attention. In 2015, the Federal Bureau of Investigation (FBI) joined state and county authorities in a reopened investigation, offering a reward for information that could help solve the case. 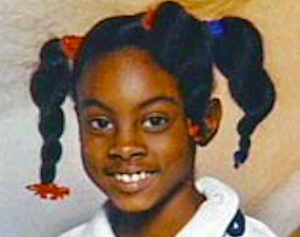 Asha was last seen by her family sleeping in her bed at approximately 2:30 a.m. At 4:00 a.m., she was seen by motorists walking along North Carolina Highway 18 in Shelby, North Carolina. More than a year later, Asha's book bag was discovered...

www.crimewatchers.net
Last edited by a moderator: Mar 2, 2020
Click to expand...

Asha's photo is shown age-progressed to 29 years. She was last seen by her family sleeping in her bed at approximately 2:30 a.m. on February 14, 2000. At 4:00 a.m., she was seen by motorists walking along North Carolina Highway 18 in Shelby, North Carolina. NCMEC serves as a clearinghouse for the collection and dissemination of investigative leads and sightings of missing children to appropriate law enforcement agencies. NCMEC neither endorses nor assumes responsibility for this or any reward fund.

The FBI is offering a reward of up to $25,000 for information leading to the arrest and conviction of the person or persons responsible for Asha Degree's disappearance.

Two truck drivers reported seeing her walking south on Highway 18 north of Shelby between 3:30 and 4:15 a.m. Asha was apparently near the intersection of Highway 180 at the time, about a mile from her home. She left the highway at this point and walked off into the darkness. It was the last confirmed sighting of the child.

Asha may have been sighted getting into a distinctive dark green early 1970s model car on the night she was last seen. The vehicle, which had rust around the wheel wells, is thought to have been either a Lincoln Mark IV or a Ford Thunderbird. Photos of similar cars are posted with this case summary. Twenty years after the mysterious disappearance of 9-year-old Asha Degree from her home in North Carolina, the FBI and local investigators continue to actively search for clues in the case.

It was 20 years ago today that Asha Degree, a shy 9-year-old North Carolina girl, went missing in the middle of the night. The spirited fourth-grader’s disappearance in 2000 shook her rural community of Shelby and remains an enduring mystery, even as police, the FBI, and her family continue to actively search for clues.

“After 20 years, I still believe my daughter is alive,” said Iquilla Degree, who, with her husband Harold, still harbors hope that Asha (pronounced Ay-shuh) might find her way home. “I do not believe she is dead. And I know someone knows something. I’m not crazy enough to think that a 9-year-old can disappear into thin air without somebody knowing something.”

The case remains an open investigation, with a local detective reviewing leads—old and new—and FBI investigators from the Charlotte Field Office consolidating and combing through case files for unexplored patterns or clues. Like Asha’s mother, investigators believe someone in area may hold the key that could unlock the case.

“We strongly believe that there is someone out there that may have a piece of information that will help her,” said Cleveland County Sheriff’s Office Detective Tim Adams, who came out of retirement in 2014 to lead the department’s probe. In 2015, the sheriff’s office teamed up with the FBI and the North Carolina State Bureau of Investigation in a top-to-bottom re-examination of the case, which has since generated more than 350 leads, including 45 in the past year.

“The fact that it was a small child that left on Valentine’s Day really caught everybody’s heart in this community,” Det. Adams said. “She’s been called Shelby’s Sweetheart, because she’s a child that’s one of our own that has gone missing, and we want to find out what happened to her.”

“We encourage anybody out there that if they have any information—no matter how small or minor it may seem—it might be extremely crucial to further us getting one step closer to Asha,” said FBI Special Agent Michael Gregory, who is leading the case now for the Bureau. “We will continue to pursue all avenues to find out what circumstances led to her disappearance, and we will continue to pursue this case at all costs.”

Working with the National Center for Missing & Exploited Children, the FBI has released multiple age-progressed photos of Asha, including a new version this month showing what Asha may look like now as a 29-year-old. The FBI is offering a $25,000 reward on top of $20,000 set aside by the Cleveland County Sheriff’s Office and the community. Three years ago, the FBI deployed its Child Abduction Rapid Deployment Team, which spent more than a week on location and generated still more leads and interview prospects.

Clues and potential leads include items discovered in Asha's book bag, which was recovered 30 miles from where she was last seen. They include a New Kids On the Block concert T-shirt and a Dr. Seuss book, which had been checked out of her school library.

Staff member
I can't believe Asha has been gone for 20 years. What prompted her to leave her bedroom that night?
Was she being groomed by someone who asked her to leave that night?
Was she just a simple "runaway" who would have returned within several hours if a predator hadn't come across her?
So many questions. Not many 9 year olds would leave their homes in that weather for no reason.

SheWhoMustNotBeNamed said:
I can't believe Asha has been gone for 20 years. What prompted her to leave her bedroom that night?
Was she being groomed by someone who asked her to leave that night?
Was she just a simple "runaway" who would have returned within several hours if a predator hadn't come across her?
So many questions. Not many 9 year olds would leave their homes in that weather for no reason.
Click to expand...

Great questions SheWho! I was asking myself the same questions, in that order as a matter of fact! Was she running 'from something/someone' or 'to something/someone? If it's the latter she must have known them..
Nine years old is so young! I have a neice that age and and she won't even go get something out of the car at night without someone with her. I couldn't imagine her just walking down the street

..
I wonder if phone records were pulled?

SheWhoMustNotBeNamed said:
I can't believe Asha has been gone for 20 years. What prompted her to leave her bedroom that night?
Was she being groomed by someone who asked her to leave that night?
Was she just a simple "runaway" who would have returned within several hours if a predator hadn't come across her?
So many questions. Not many 9 year olds would leave their homes in that weather for no reason.
Click to expand...

I've always leaned on the being "groomed" theory. I wonder if there have been any non-related arrests in the last 20 years of people that were in her circle at the time?

Inmate says he knows what happened to Asha Degree

For couples around the country, Valentine’s Day includes flowers, candy and expressions of love.For one Fallston family, the day marks a painful
www.shelbystar.com

Inmate says he knows what happened to Asha Degree​

For couples around the country, Valentine’s Day includes flowers, candy and expressions of love.

For one Fallston family, the day marks a painful anniversary - the day a 9-year-old girl vanished.

Local, state and federal investigators continue to try and solve the mystery of Asha Degree’s disappearance, and they may have a new lead.

A prison inmate recently sent a letter to The Star in which he says he knows what happened to the fourth-grader nearly 21 years ago.

Marcus Mellon wrote to the news outlet to say that the child was killed, and he knows how and where to find her.

Mellon, 53, was convicted of sex crimes against children in Cleveland County in 2014.

In his letter to The Star, Mellon says he has information and asked that it be passed along to the FBI.

Mellon asked investigators to come see him to find out what happened. Here is what he wrote:

Asha Degree has been missing for over 20 years. About four months ago I had found out her whereabouts and what had happen to her. She was killed and then took and buried. I do know how and what town she is in. I hope you get this letter and do come see me. It’s on the up and up.

Cleveland County Sheriff Alan Norman said the tip will be followed up on, but an obstacle will slow the process.

Mellon is serving nearly 14 years in prison and is housed at Alexander Correctional Institute where there currently is a COVID-19 outbreak. Norman said that investigators from his department and the FBI will interview Mellon when the situation at the prison is under control.

Though the child vanished more than 20 years ago, tips still get reported. According to the FBI, 45 came in last year.

Whether or not Mellon actually has knowledge of what happened to Asha, Norman said all tips are investigated. The sheriff did note that sometimes inmates have ulterior motives such as bargaining for preferential treatment during incarceration.